There is this one meme: 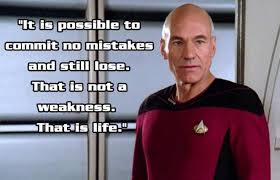 If there is failure of sorts, it doesn’t necessarily mean that a mistake was made. Which brings about a different definition of what a mistake is. It’s a failure to act in the best manner. If you know there is a better action that you’re taking right now, and you watch yourself take the worse action – that looks like a mistake, to me. Mistakes include: snooze instead of get up (very hard!), not talk instead of talk to someone (very hard!), and giving in to anger or negativity (moderate).

To not make mistakes, a constant focus is desirable. But then, if you have continuous focus, I think it’s a different game for you altogether.