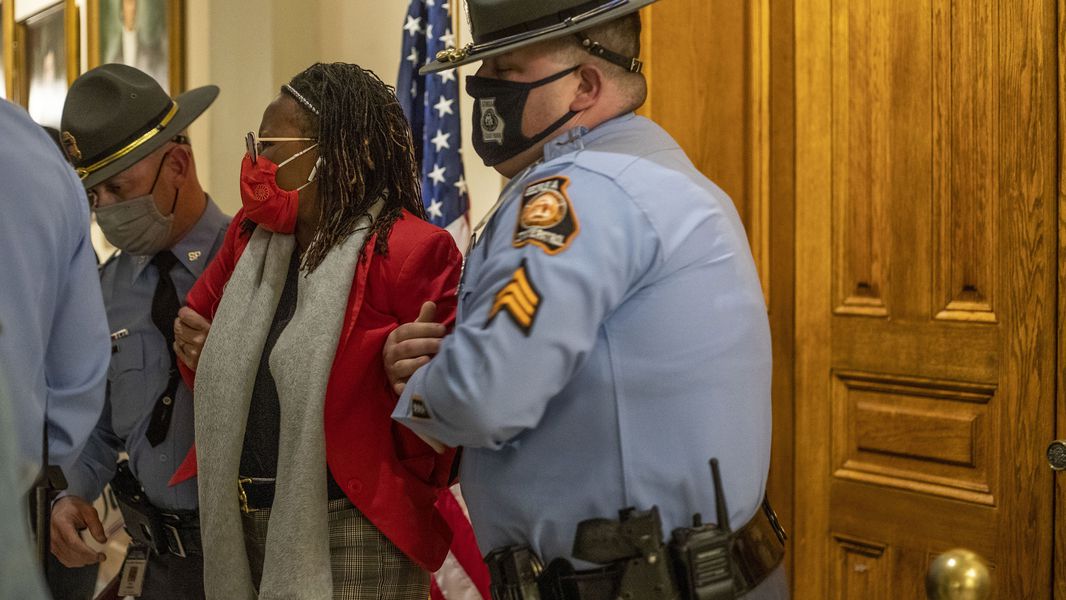 Georgia state troopers arrested state Rep. Park Cannon on Thursday as she knocked on Gov. Brian Kemp’s door, interrupting his livestreamed announcement that he had signed an elections bill into law.

The officers forcibly removed Cannon, a Democrat from Atlanta, dragging her through the Capitol and pushing her into a police car. She was charged with obstruction of law enforcement and disrupting General Assembly sessions, according to the Georgia State Patrol and released on bond late Thursday.

Cannon was with several other protesters when she knocked on Kemp’s office door, saying the public should be allowed to witness the announcement of the bill signing. The sweeping legislation requires ID for absentee ballots, limits drop boxes and changes early voting hours.

Tamara Stevens, an activist who was with Cannon, said she wasn’t being disrespectful or causing a disturbance.

“She knew he was signing a bill that would affect all Georgians — why would he hide behind closed doors? This isn’t a monarchy,” Stevens said. “You have a women of color fighting for the rights of Georgians and they arrested her for knocking on the door because she wanted to witness our governor sign the bill.”

Cannon was charged with the two counts taken to the Fulton County Jail after she refused repeated warnings to stop knocking on Kemp’s office door, according to the Georgia State Patrol.

“She was advised that she was disturbing what was going on inside and if she did not stop, she would be placed under arrest,” said GSP spokesman Lt. W. Mark Riley. “Rep. Cannon refused to stop knocking on the door.”

Court documents show she was charged with “knowingly and intentionally” knocking on the governor’s door during a bill signing and stomping on Officer L.T. Langford’s foot three times “during the apprehension and as she was being escorted out of the property.”

“The accused continued kicking on LT Langford with her heels,” according to the arrest warrant.

”She was doing her job as an elected official,” Thomas said. “She was asking where the governor was and where the bill was being signed.”

Providing the facts and context that help readers understand the current debate over voting laws is a priority for The Atlanta Journal-Constitution. For a better understanding of the issues driving Legislative action, click on these links.

• 15 headlines that explain the current debate

The Georgia Constitution says legislators are “free from arrest during sessions of the General Assembly” except for charges of treason, felonies or breach of the peace.

During a 2018 special legislative session, then-state Sen. Nikema Williams was arrested during a protest urging officials to tally all absentee and provisional ballots before declaring Republican Brian Kemp the winner in a close election for governor.

The charges were later dropped and Williams, now a U.S. House member, filed a federal lawsuit seeking to bar further use of the law used to arrest her.

Earlier this legislative session, Cannon was involved in a separate confrontation with a Capitol police officer.

During a protest over elections bills, Cannon positioned herself in front of an officer’s bullhorn, and then another officer took hold of her arm to move her away. The conflict led to a sit-in by Cannon and fellow Democrats on the stairs of the state Capitol.

Attorney Gerald Griggs, who posted a video of Cannon being forcibly dragged out of the building, said in an interview from the Fulton County Jail that he planned to represent her.

“I’m concerned that this happened,” he said. “I’ll fight to get her released.”

She was also joined at the jail by U.S. Sen. Raphael Warnock, who is the senior pastor at Ebenezer Baptist Church, the congregation where Cannon attends. He drew a line between the violent insurrectionists who avoided arrest on Jan. 6 after they invaded the U.S. Capitol and a Georgia state legislator who was arrested for knocking on a door in her workplace.

“Today is a very sad day for the state of Georgia,” he said. “What we have witnessed today is a desperate attempt to lock out and squeeze the people out of their own democracy.”