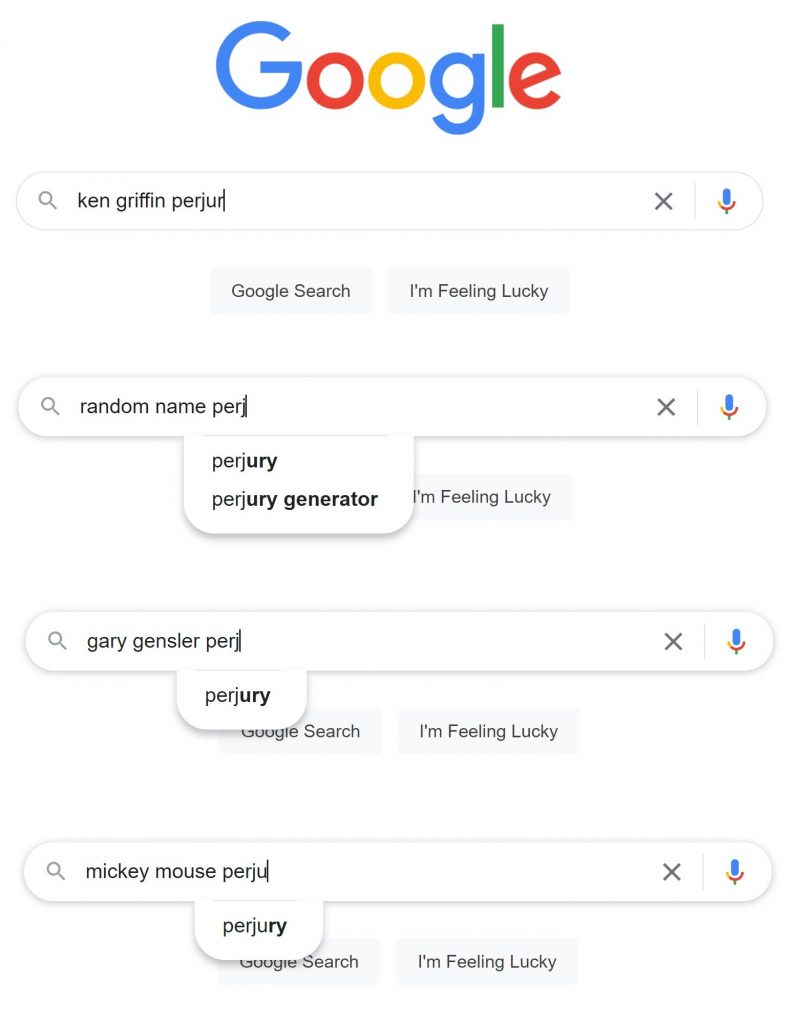 TLDR; For the last several days Go0gle has stopped associating (auto filling) the word perjury with Ken Griff1n when searching (try it yourself). Virtually every other name you search (including ‘random name’ and ‘mickey mouse’ will complete the word perjury when you start to type it. DRS is the way.

A couple days ago I posted about this, and it was lost in the noise. Since this is still actively happening, I felt it was worth bringing it to light again so more people can see the lengths K3n will go to to protect himself. You think when you search Go0gle (or any other search engine), you’re receiving an unbiased view of the internet, free from manipulation, and that hasn’t been massaged based on monetary incentives. You think you live in a world of free information flow on the internet.

Guess who else is being protected…

Recommend watching the following documentaries on this topic to learn more about what’s going on with your internet searching:

Please let me know what other names associated with this mess are hiding from the public through this subtle yet blatant search manipulation.

Edit: It brings a smile to my face to imagine a Google analyst deep in he bowels of Alphabet HQs getting a pop-up notification of a trending search that hits their blacklist ‘Ken Griffin + perjury’ and wondering “Hm… what’s this?” thinking to himself ‘why did thousands of IPs from all over the globe just now search this?’, as he took off his Google hat for a second, placing it slowly down on his desk, he clicks the disable button on the “don’t show Griffin + perjury news” (camera pans to the side of this noble character… to reveal an Ape riding a rocket to the moon tattoo (one of us, can be heard chanting in the background as the scene cuts to Ken’s trial)… likely there is no analyst like this, but one can dream. The movie deserves it… if I were the one writing 😀

Edit 2: Worth noting. This post is at 98% upvoted (at 7.5k votes) at 11:03am EST and I’ve added the phrase “DRS is the way.” in two places. I’m curious to see if that upvote diminishes with this phrase being included. I will report back later.

or… if I’m being fair in considering alternative explanations… it’s possible that being at the top of the sub brings a lot more “this isn’t directly about what I want to see… so I’ll downvote” sentiment. That said, the post was at the top for a good 30 minutes prior to edit 2 above and was fluctuating between 98-99% since it started. So I see this as unlikely to be the main contributing factor to the uptick in downvoting here.

Just providing the data and some thoughts of my own. I’ll let others draw their own conclusions.

Edit 4: Looks like my edit 3 section included the name of the sub triggering the automod to remove this post. I’m hoping it can be fixed. I’ve edited that part to read “the sub” instead of the name.

Edit 5: It’s back up. Thanks mods, appreciate you.

Edit 6: Searching the term now brings you directly to this post.

“Fate it seems is not without a sense of irony.”

The downvoting percentage has been holding steady at 12% since edit #3 and after the words “DRS is the way” were added to this post.

To summarize. This post saw the front page here about an hour after it was posted. It made it to the top post by the 90 minute mark. At the 2 hour mark I noticed the upvoting was steady between 99-98%. During edit 2 (about 30 minutes after this post was at the top spot) I added “DRS is the way” to it in two places… after sitting at the 1-2% downvote mark the first 5k votes, the post drastically changed to a consistent 12% downvote right after the mention of DRS was included.

To me, this is proof that either approximately 1 in 8 apes dislike DRS enough to downvote posts that mention it, but not enough to comment about it under the post (I don’t see many comments saying anything negative about DRS since I’ve added it), or the more simple conclusion might be that a network of accounts are downvoting DRS mentions.

Edit 8: Since I was asked… here is the TLDR for the edits (downvoting analysis in real time; and how it relates to DRS mention)…

TLDR edits; Before the mention of DRS being added to this post (second edit) the first 5k votes were 1-2% downvotes (I’d say 1.5% based on it fluctuating between the two at that time). Since I added “DRS is the way” to this post the downvoting has steadily been 12-13%.

There is no explanation I can think of to explain this sudden change from consistent 1.5% downvote to suddenly a 12% downvote… other than to point to the obvious conclusion that:

a network of bot accounts are downvoting posts that mention DRS.