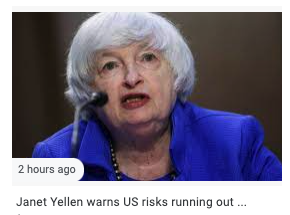 tl;dr: today’s rout is brought to you most likely by rising yields, and is likely cyclical in nature.

The markets are tanking today. One of the contributing factors is the rising interest rate and the “fear of stagflation”. The yields on 10-year T-bills are spiking. Personally, I think if short sellers ladder-attack the T-bill market, this would happen. The short sellers are experts at driving a price down, and yield is inverse of price on T-bills, so shorting t-bills raises the yield. This is bad for stocks, and shorting stocks at the same time sounds like a good idea. So if you’re a big market participant, maybe a market maker or a hedge fund, maybe if you short t-bills and equity markets at once, you can get a good deal. This speculation also assumes that these movements are transient: once shorting is done, prices should rebound at least somewhat, if not fully.

The market appears to be over-correcting, I’m calling bottoms here.

The debt ceiling… is happening on the news, but I think of that as much more political than economic in nature. At the last moment they’ll come to an agreement, and the republicans in the white house may or may not have achieved whatever their goals are, with this delay.

Another speculation is that Evergrande ripples are still felt across the markets. Evergrande defaults on their next payment… in two days, right? So their potential bankruptcy is still in the future, and market participants may be feeling the pain now, and may continue doing so.

The tinfoil hypothesis is that since Gamestop has been above $180 for a while and is stubbornly not coming down below that mark, the entire market is suffering for it. Gamestop is trending towards $180 again, by the way. But there is a lot, a lot of pressure now, more so than before. So let’s see where the support is – it used to be $140, now maybe $180, and above $180 is suffering for everybody, as we see today. Again this is tinfoil hat-style speculation and not financial advice.

I personally don’t think of rising gas prices as negatively affecting equity markets, but it should be mentioned here that crude oil is at the highest it’s beeen in 3 years or so, at $80 a barrel.

tl;dr: today’s rout is brought to you most likely by rising yields, and is likely cyclical in nature.