As you know, we saw some fireworks yesterday the 24th. Around noon, the S&P was down 3.5%, and the nasdaq was down close to 5%

This tends to happen post opex, especially as hedges roll-over, and with the VIX running at 30, it was forcing liquidation by institutional longs. This forced liquidation and negative gamma was forcing dealers to go short, leading to the sell-off. I had thought this was going to create an ignition effect similar to late feb 2020, whereby the increasing volatility creates a cycle of forced selling by particularly factor strategies with VIX as an input, creating every increasing VIX and spiraling into a liquidation cascade that resembled the Covid crash. Everything was looking similar, including the VIX and SPX. 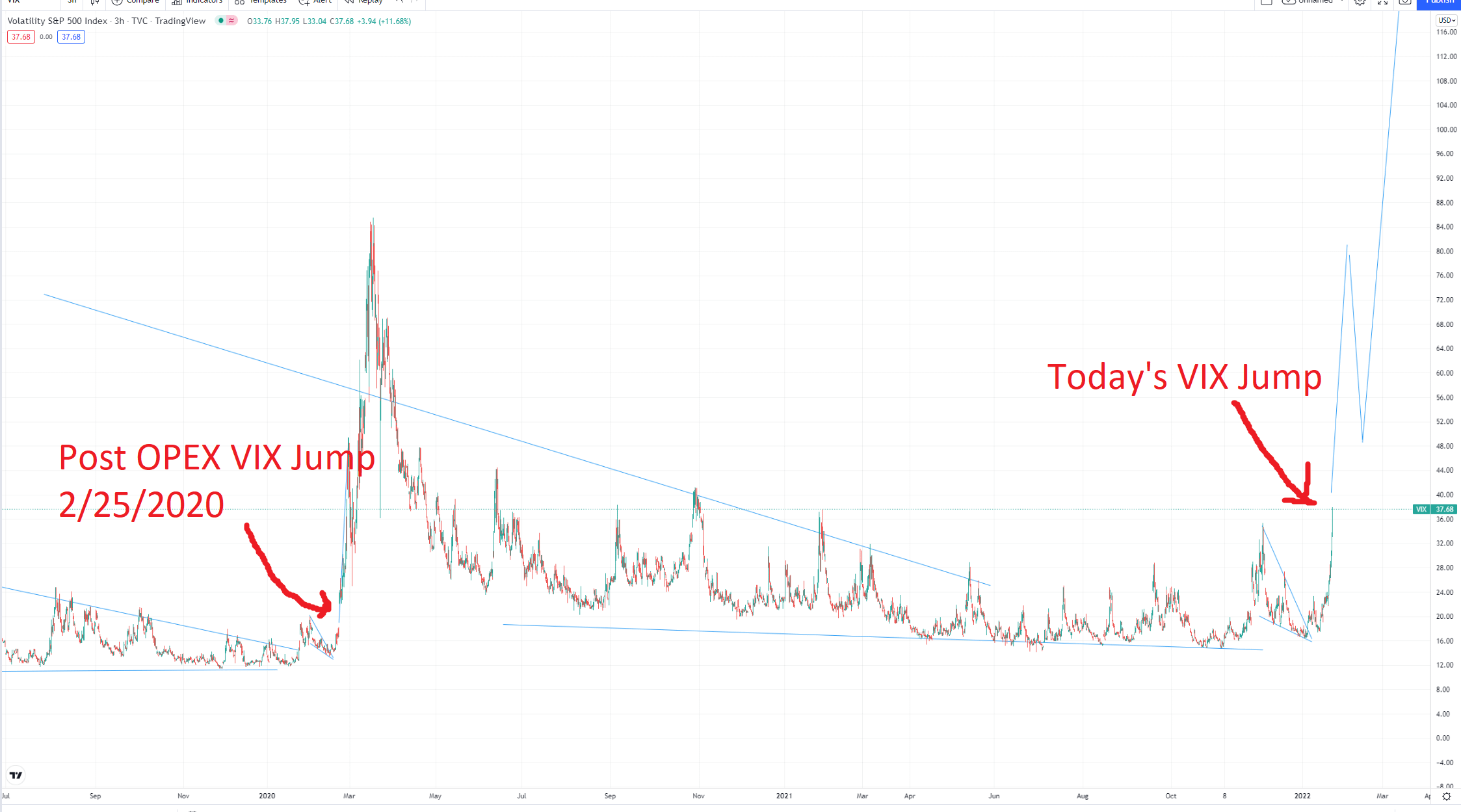 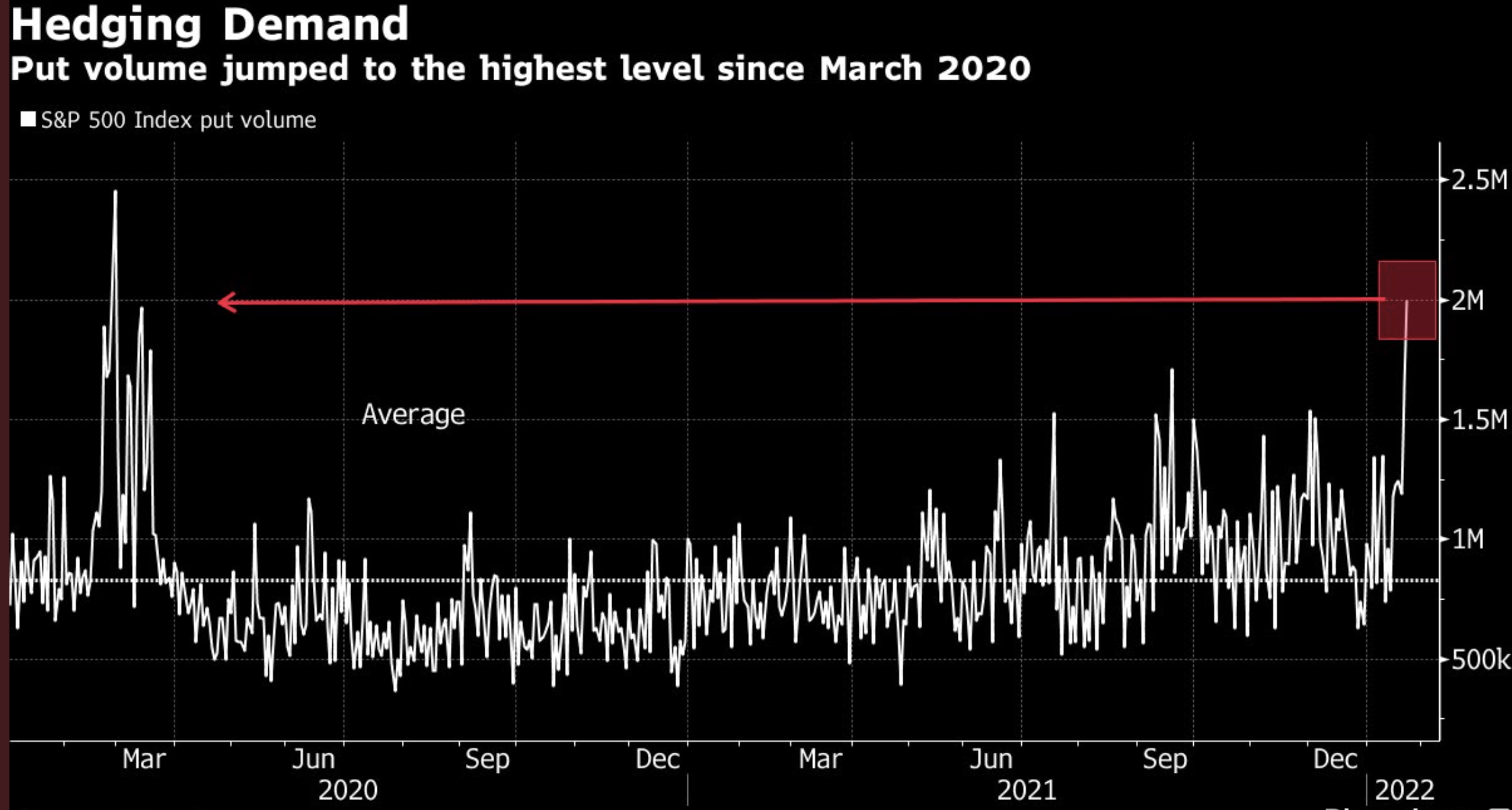 Put volume was exploding as everyone was trying to get puts to hedge their books, to levels of the early March 2020 highs.

then something strange happened, at almost exactly at noon, some player, I mean really big player stepped into the market and started selling billions and billions of puts. 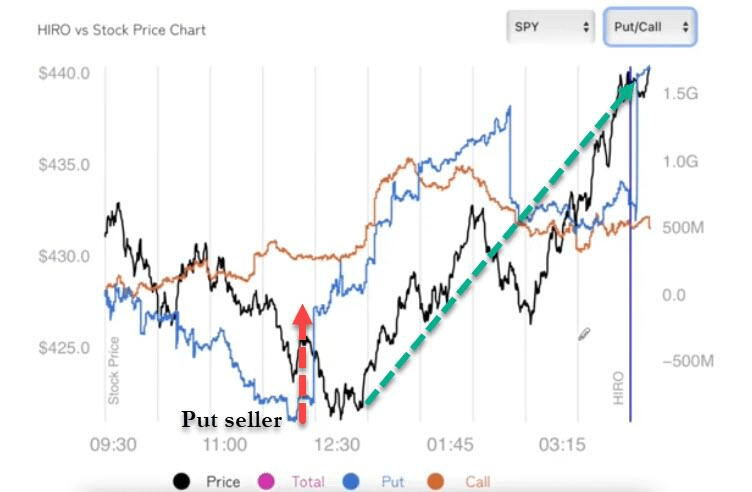 This is the equivalent of something going infront a freight train that was gathering speed, and saying, i am going to step on to the track and directly fight it with the worst risk reward known to man. Selling puts into a crash gives you x payoff if it reverts, but you will lose 10x if it keeps going. There is no way any sane trader would do something like that, but someone clearly did, and to the scale of probably tens of billions of dollars. 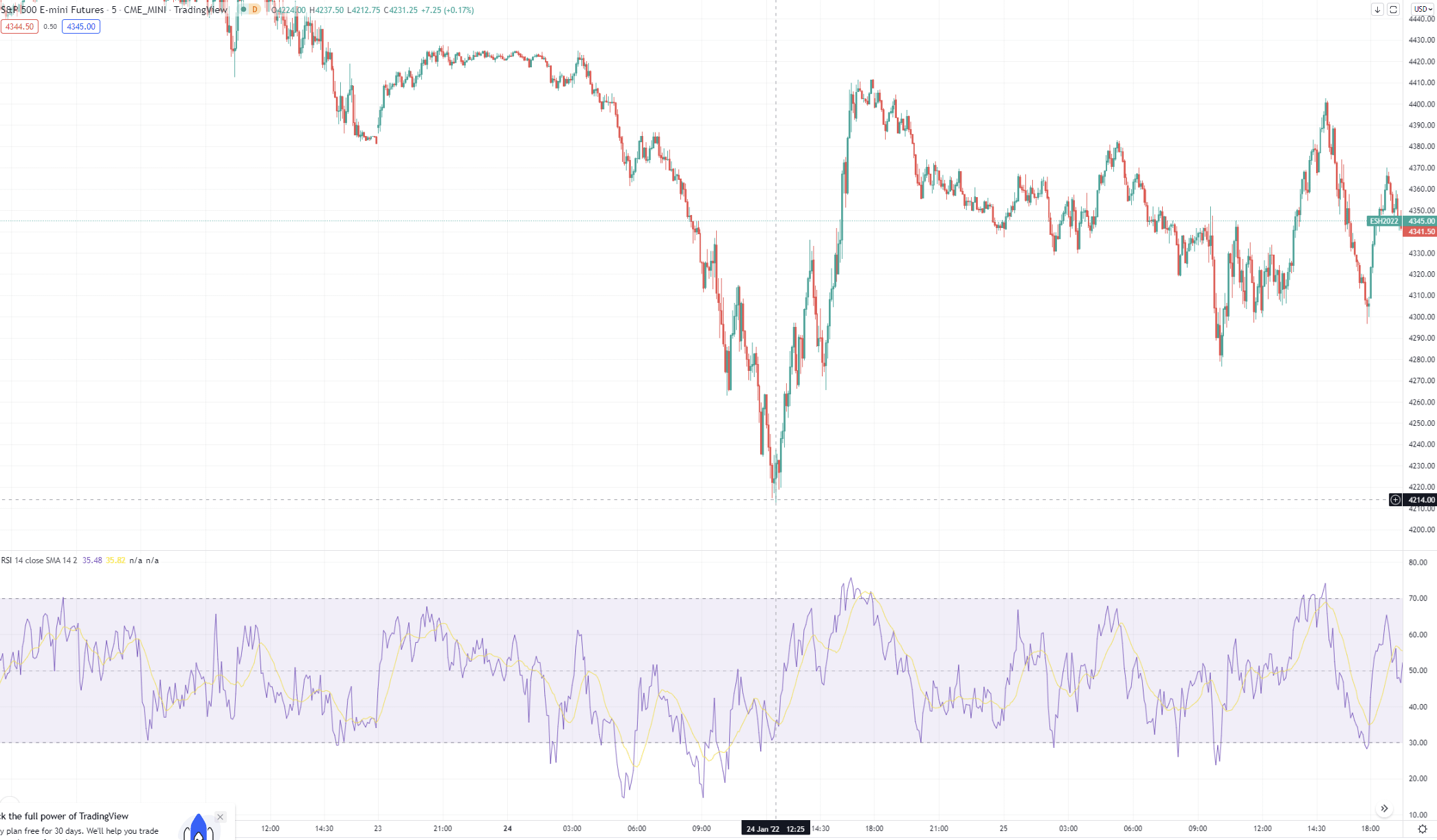 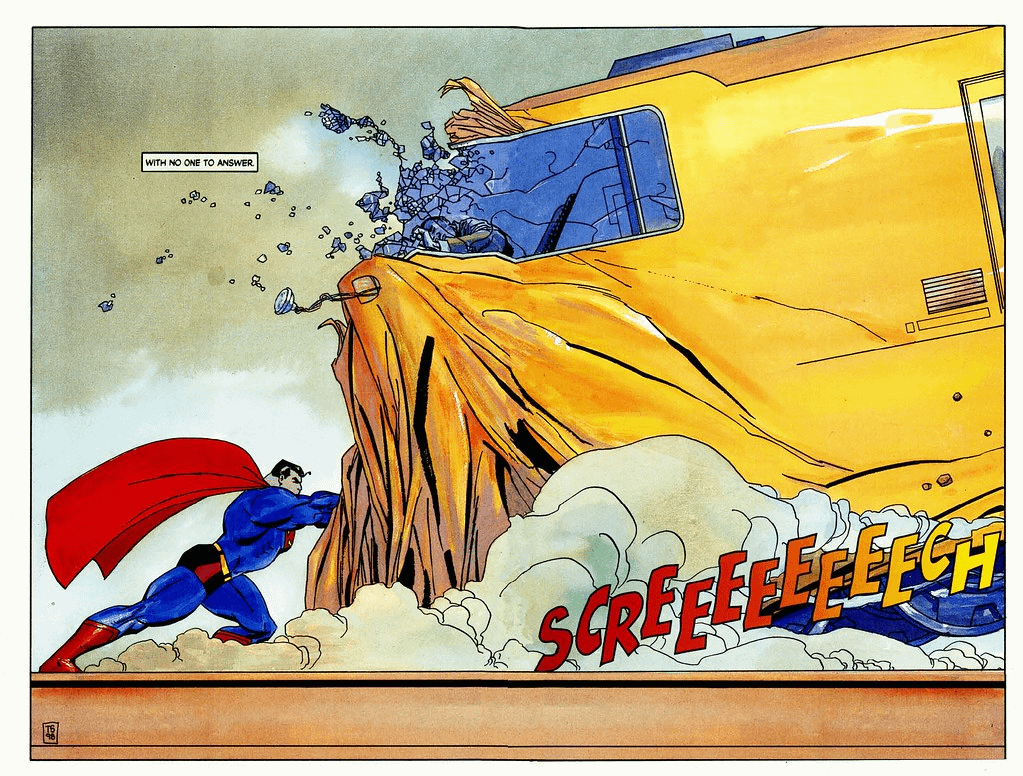 Spotgamma covered it as well in this video.

As a result, VIX was crushed, and this allowed relief and dip buyers to come in, VIX was crushed down back to 30, and the forced liquidation of the factor longs never came. Someone prevented what was setting up to a extreme liquidation event, we were nowhere close to overbought on the SPX on the RSI. 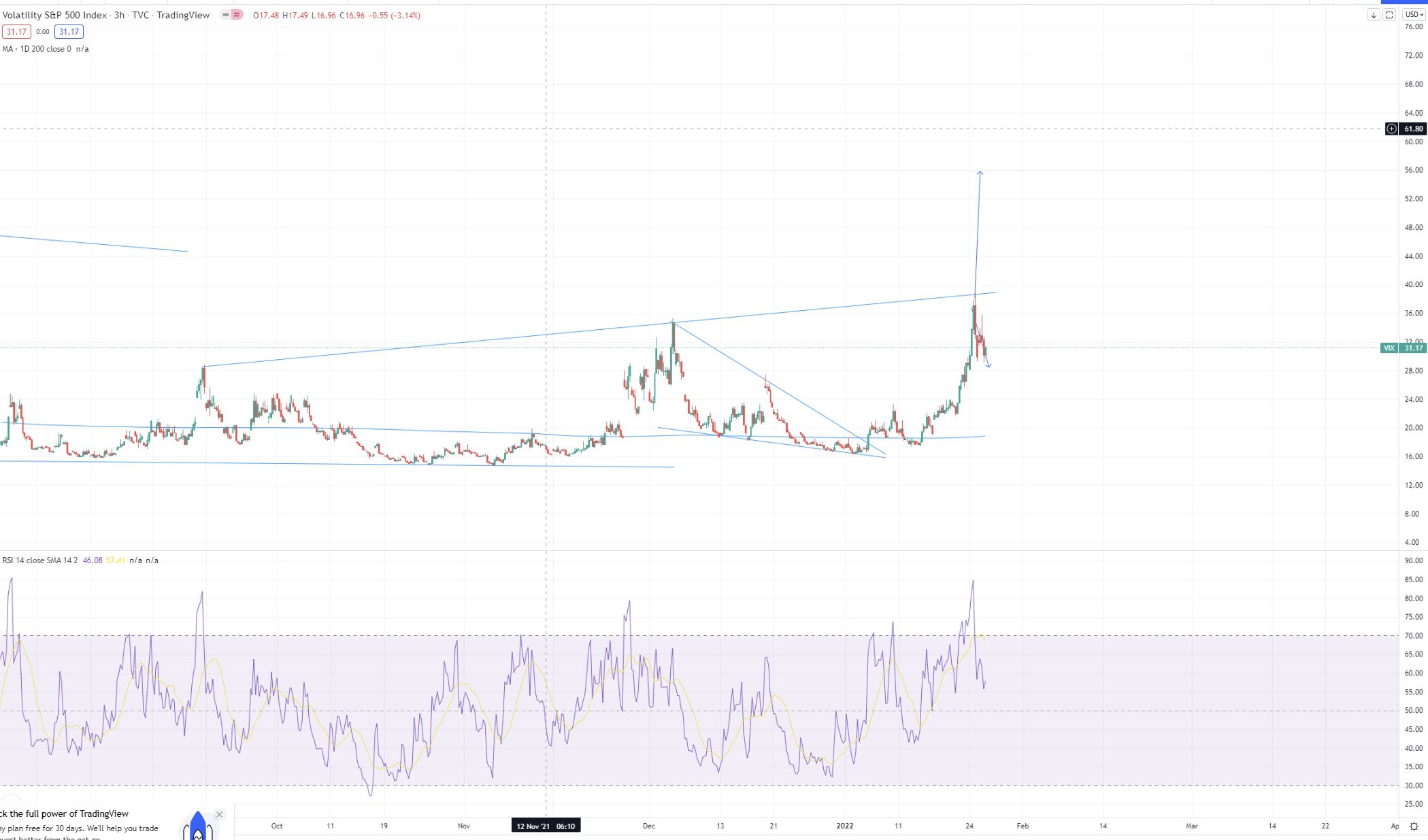 I know of no institutional investor, or hedge funds, even the largest one that have that kind of capital, the largest investment bank prop desks would not be allowed to sell billion, maybe even tens of billions of puts and attempt to crush the VIX and prevented what could have been a 1987 crash style event. Notional options that rolled off Jan 21 expiry was somewhere around 1-2 trillion. The hedging/gamma demand by rolling hedges may be in the 30-100 billion range. Clearly normal market makers couldn’t supply that much demand, given daily option volumes are around 5-10 billion. So some entity sold close to 10-50 billion worth of puts in a matter of 2.5 hours.

I have no idea what this entity is, but it is clear that they have a big impact on backstopping markets. And for that reason. I’ve taken off most of my bearish bets. This is just absurd and insane. I am going to be waiting for data in the coming days just to show how crazy this move was.

I may have to adjust my strategy going forward by building a tailed VIX call spread next time, monetize near the money, short the shoulders as those seem to get backstopped, and then a small far out right tail in case they lose completely control.