TL;DR: Alongside GME, you’ve had stocks like Sears or even Krispy Kreme Donuts have negative cost to borrow in the past. So it shouldn’t happen…but it does. Because crime.

Edit 7: full disclosure this post was on rush mode, so def missed some info on this post that u/ chai_latte69 clarified below. If anything else is wrong lmk! Don’t want a post pushing up the sub if some misinfo, but I believe this is regarding the quote about Krispy’s negative rebate rate (Sears example was a negative cost to borrow rate):

The dialogue on negative rebate rates is spiraling into tinfoil hat territory and not in the good way. The problem is that the borrow rate is being conflated with the rebate rate and also the directionality of the loan. To borrow a stock (also known as a short), the borrower must upfront some amount of money (also known as collateral). Much like your money in a savings account, the collateral earns interest (usually the Federal Funds rate which is considered the risk-free rate of return). The negative rebate is broker lender telling the SHF borrower that we are not only going to keep the interest on your collateral, but you (SHF) also has to pay us more money. An analogy would be the bank charging you money to have your money in an account (this is a hard concept to grasp in modern banking).

Hey y’all, it’s your friendly neighborhood throwawaylurker012, and I use porcupines for suppositories

u/ tartooth’s had a wtf-worthy post circulating today about GME’s cost to borrow (CTB) going fucking NEGATIVE, implying brokers might be paying to have others short GME! 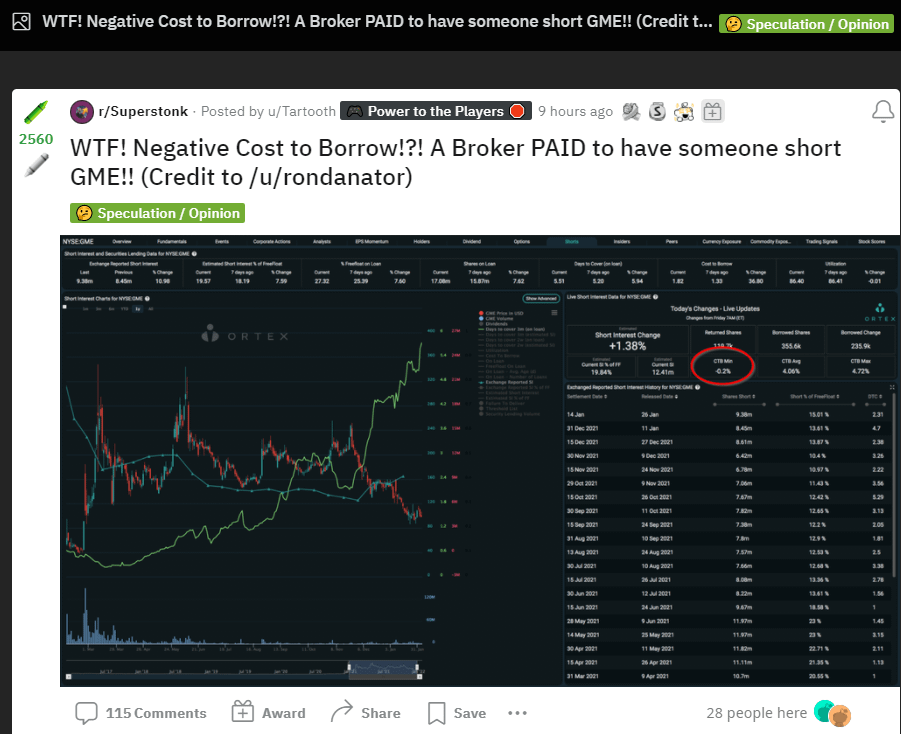 And credit to u/ rondanator for the original find on their post, outlining that wtf-issue:

So there definitely was a lot of question marks thrown up in the comment sections on these posts wondering whether it was a glitch, if Ortex fat fingered it, if they were too busy checking to see if the shelves in their office are tall enough to knock over the sprinkler system, you know the usual.

But as you now know dear apes, NOTHING IS A GLITCH.

I have been doing research on other shit (could be something, could be nothing, but it probably ends up being different animals to use as suppositories) and found a few exhibits bathed in our favorite condiment:

Now I could speed run and talk about less than confirmed cases like this discussion about Sears encountering a potential mini-sneeze in early 2017, with comments like this that are more akin to our regular views on GME’s tick up from 0.01% to 1% or 5% on QuestTrade:

Or this paper by Baker Street Capital on Sears stock being shorted more than its total float (Hmmm where have I heard of that before? Maybe in an idiosyncratic stock?): 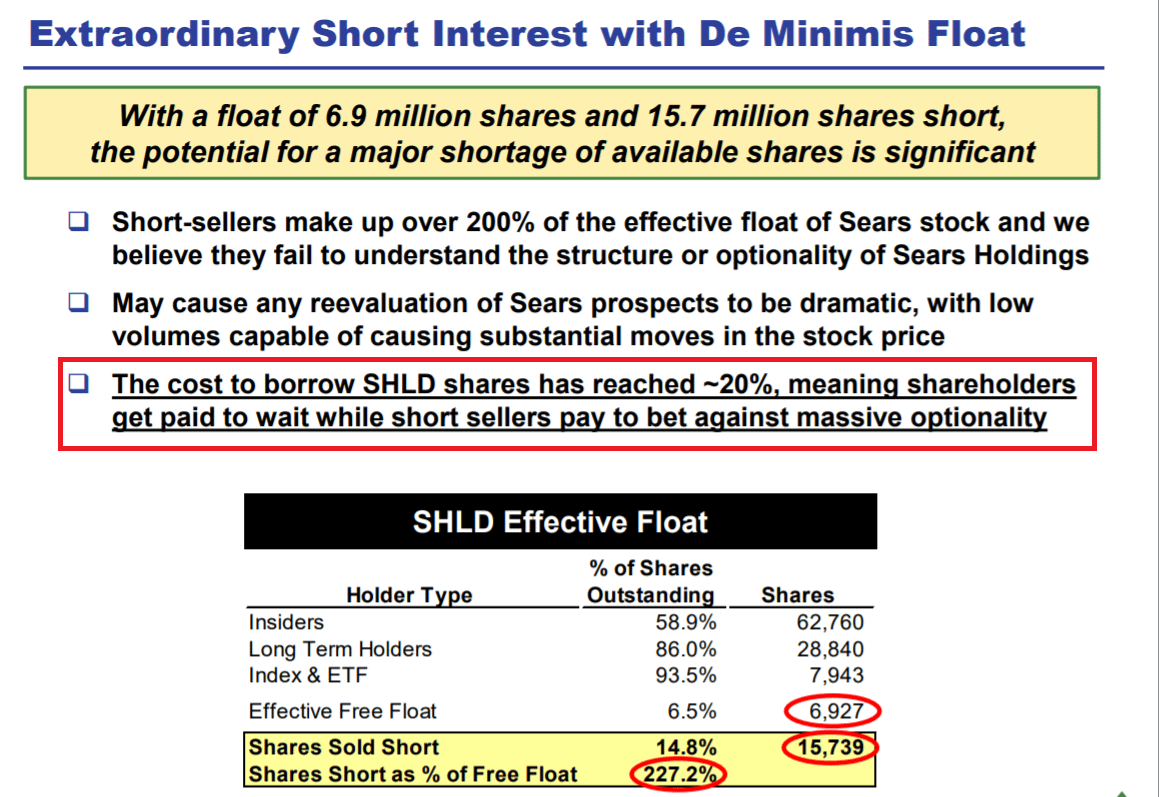 So this is all vanilla wtf-fuckery and still not as verifiable.

Fair. So chew on this instead then! How’s an SEC OIP Court decision back in 2013, against optionsXpress!: 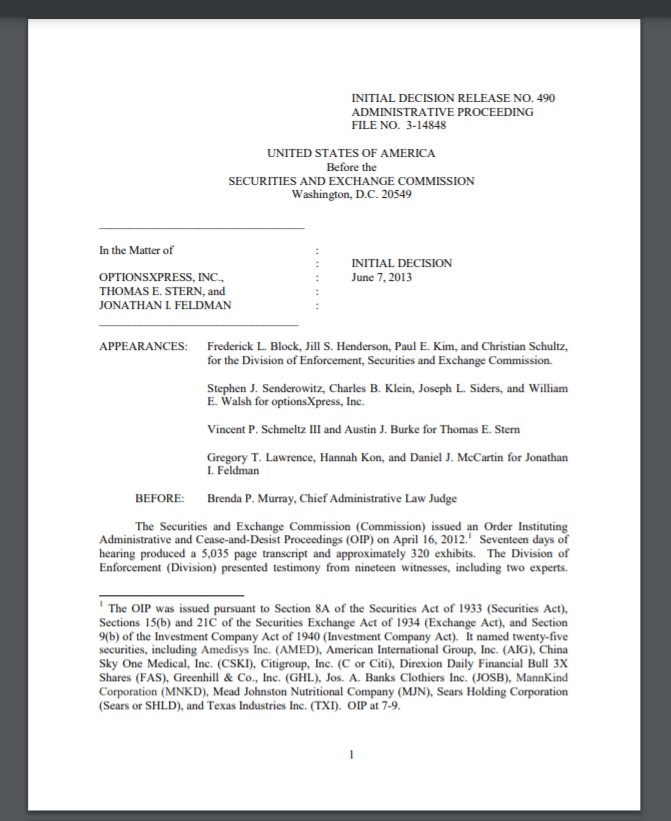 Sears at the bottom list, alongside Citi, AIG and FAS

Long story short, you had a then-small broker dealer (eventually bought out by Charles Schwab) that had some of its workers dipping their hands in mayo-filled crime as they did crime by writing synthetic longs meaning:

It was hedged by both selling ITM calls but also shorting the stock (Kenneth Cordelle Griffin’s financial terrorist favorite!) And they did this in hard to borrow securities, like AIG, FAS, and yes, Sears. 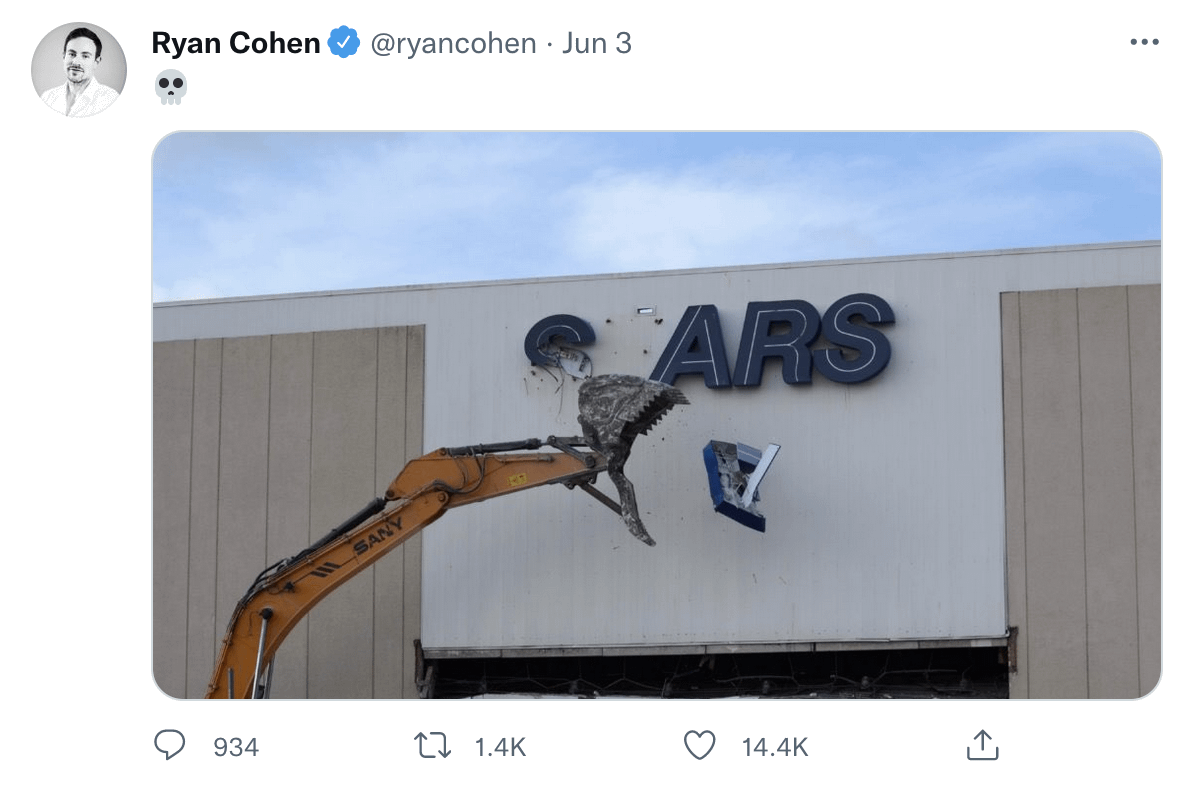 Here’s proof of the fact that negative cost to borrows can exist and aren’t crime unicorns according to Brendan Sheehy, an expert witness called in the case:

Sheehy’s experience has been that most people who borrow hard-to-borrow stocks pay a negative or extremely expensive rate to do so. Sheehy believed that Feldman’s buy-write strategy allowed him to profit because he was able to maintain a short position without having to pay for borrowing hard-to-borrow shares .

Here’s e-mail proof of them discussing it with regards to Sears:

On October 27, 2008, at 8:36 a.m., Tortorella sent Payne and Snyder an e-mail with “Today’s CNS buy-ins.” Payne responded to Tortorella’s e-mail with copies to Molnar and Snyder, “Is there a timeline you want these closed out by since the markets already open? I have been letting them close out by the end of the day.

At 8:42 a.m., Molnar e-mailed Strine: Kevin, Can you give some clarification when we need to cover our CNS fails. Is it by the opening, or anytime today as long as the position is covered? These are fails that were not covered on Friday, and now we have a T+4 CNS fail.

On November 5, 2008, Bottini e-mailed Molnar asking whether Sears was really hard to borrow. Bottini also asked, “If the firm account gets assigned on short calls will that trigger an immediate buy/in?”

” Yes, SHLD is very hard to borrow. It is at a negative rate. I’m getting what the rate is currently. Since we have an open CNS fail and as soon as we buy to cover, the customer shorts a call which gets assigned immediately, we are in a vicious cycle. Prior to the new short call rule, we had a window with Reg SHO. If we were able to get the CNS fail to zero for one day, the Reg SHO clock would get reset to a new 10 days. Unfortunately now we have to cover any CNS fail immediately. I think we should comment to the SEC regarding covering shorts from the result of an option assignment (not put exercise because the customer is controlling). The assignment has no impact on the market because the short is based entirely on the strike price. The CNS fail created by the customer short is protected on our side by Reg T requirements, and the customer would still be subject to CNS buyin rules.

The footnote makes damn sure you well know they’re not lying:

So bam, proof it exists and Ortex can’t weasel out of it saying it doesn’t.

I’ll do you one more. 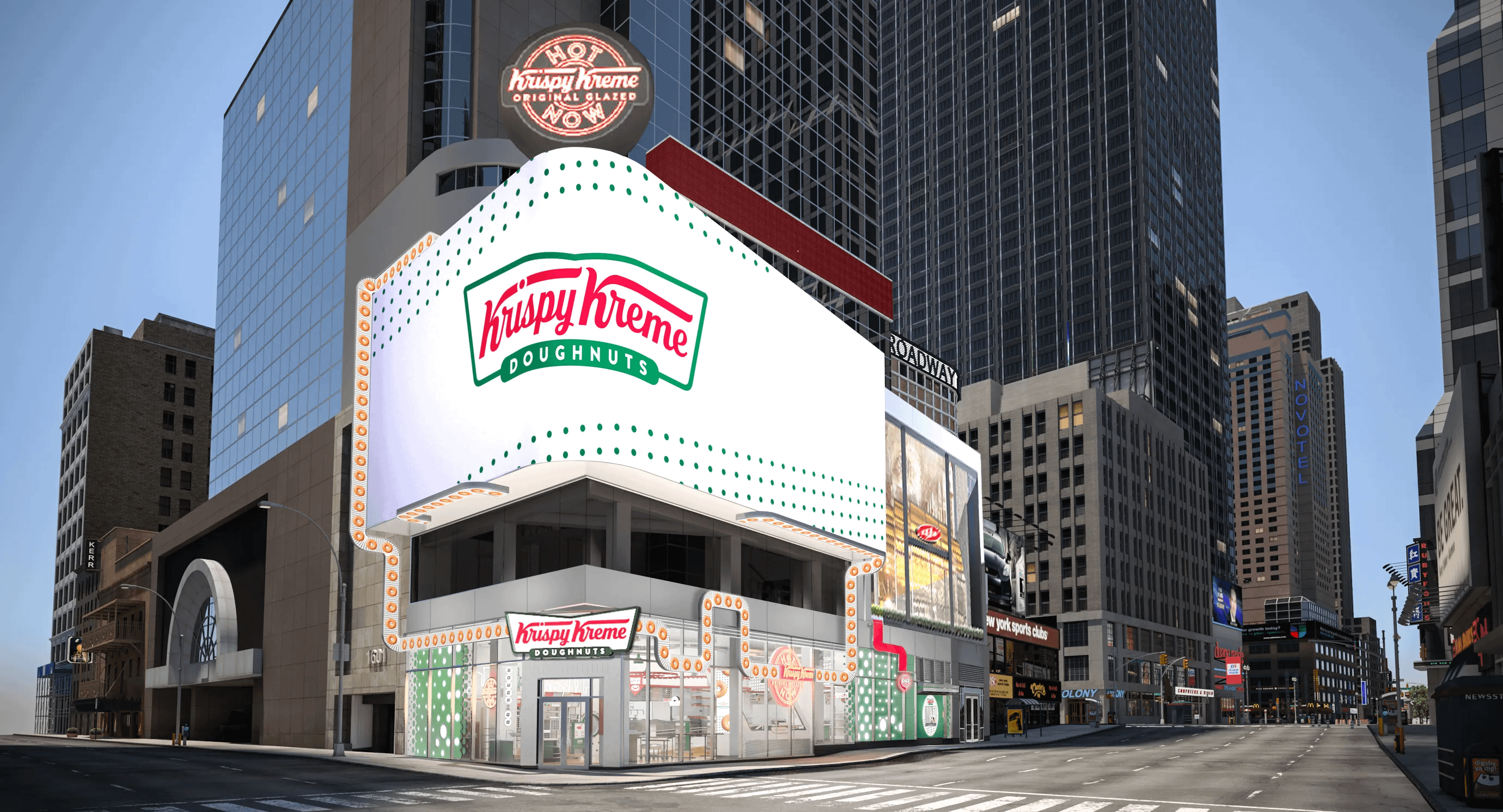 I mean it was fucking bad, look at it standing alongside some RegSHO greats (like Overstock!) on this SEC docu discussing stocks that have been on the Threshold List a long ass fucking time: 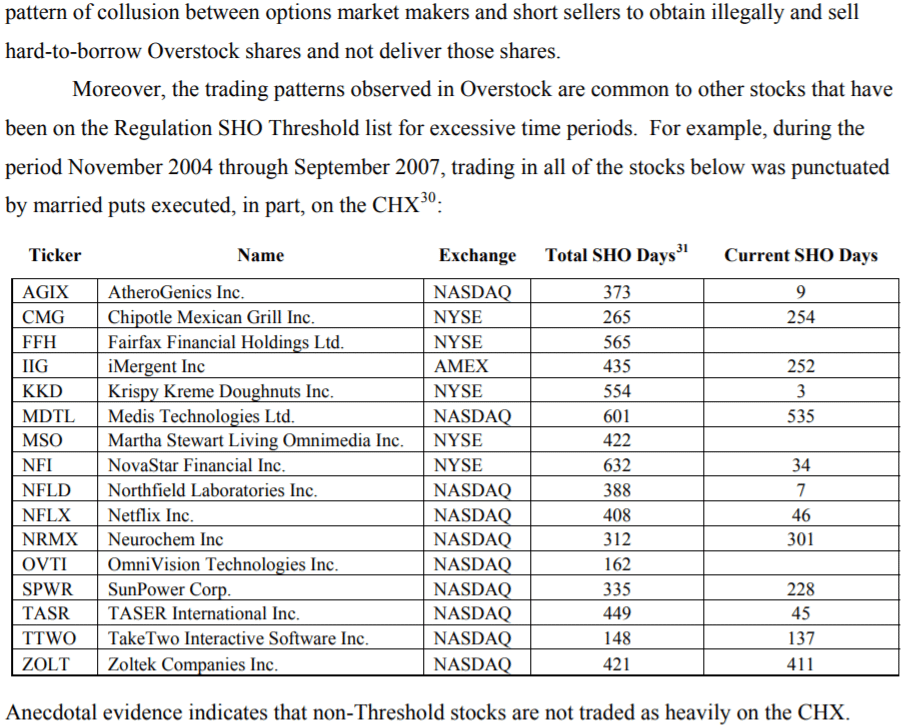 Yet, Wikipedia isn’t good enough so here’s a 2001/2002 paper from the Journal of Financial Economics and was referenced by Nera here (https://www.nera.com/content/dam/nera/publications/archive2/PUB_Short_Sale_Constraints_0413.pdf):

Note this is where I imagine chai is clarifying that negative rebate rate =/= negative cost to borrow:

rate). Krispy Kreme Doughnuts and Palm Inc. are examples of such stocks,

exhibiting loan fees as high as 50% and 35%, respectively.

So yeah, shit can happen. Cause the secret ingredient.

TL;DR: Alongside GME, you’ve had stocks like Sears or even Krispy Kreme Donuts have negative cost to borrow in the past. So it shouldn’t happen…but it does. Because crime.

EDIT: Just pulled up KKD’s old ticker and historical FTDs and WTFFFFF you LITERALLY cannot even see the price back when it first started trading: 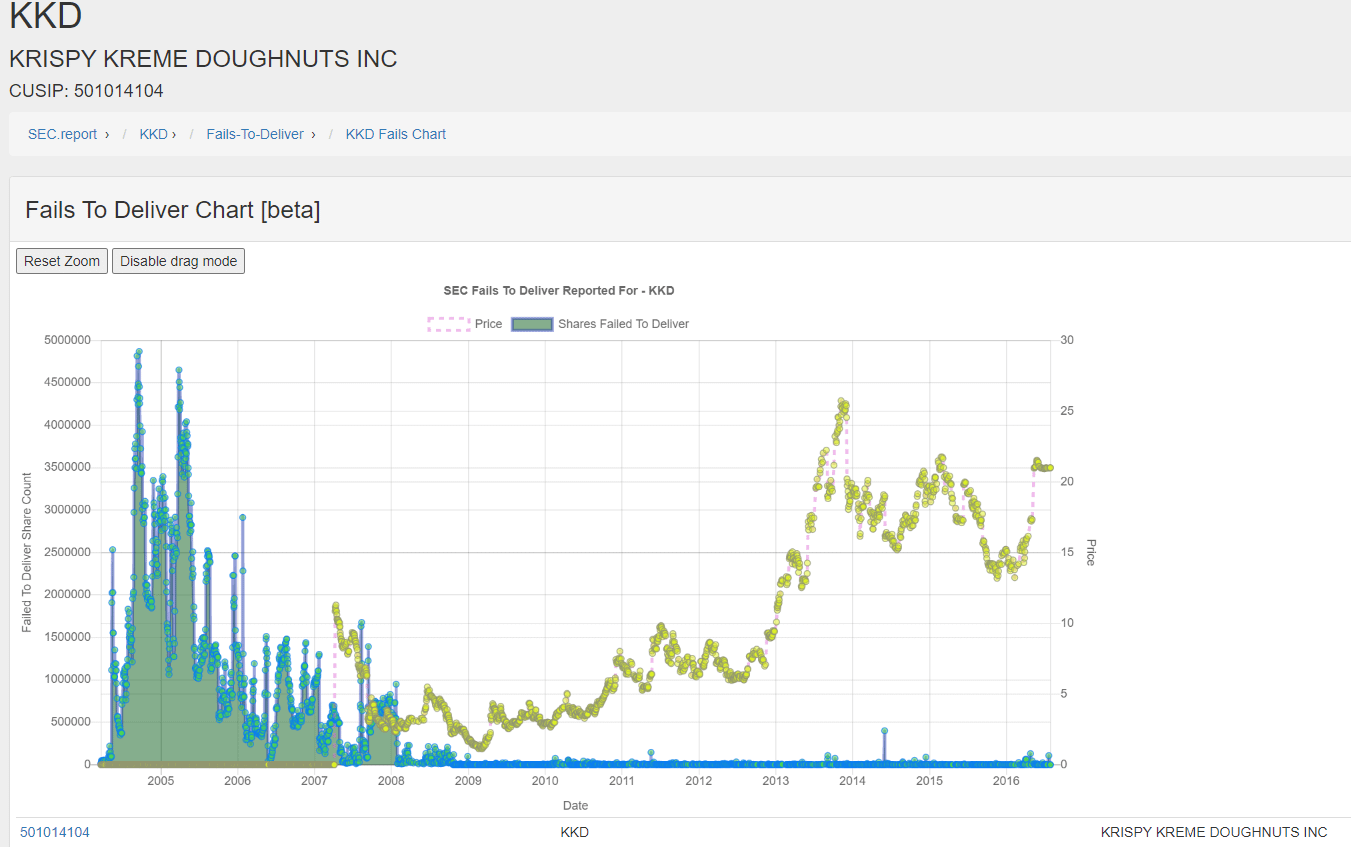 EDIT 2: If you’re interested, NYU had a lecture on hard to borrow securities that heavily featured Krispy Kreme Donuts. Here’s the link, from a 2009 class. I woulda posted it earlier but freaking wth reddit: https://www.math.nyu.edu/~avellane/Lecture13Quant.pdf 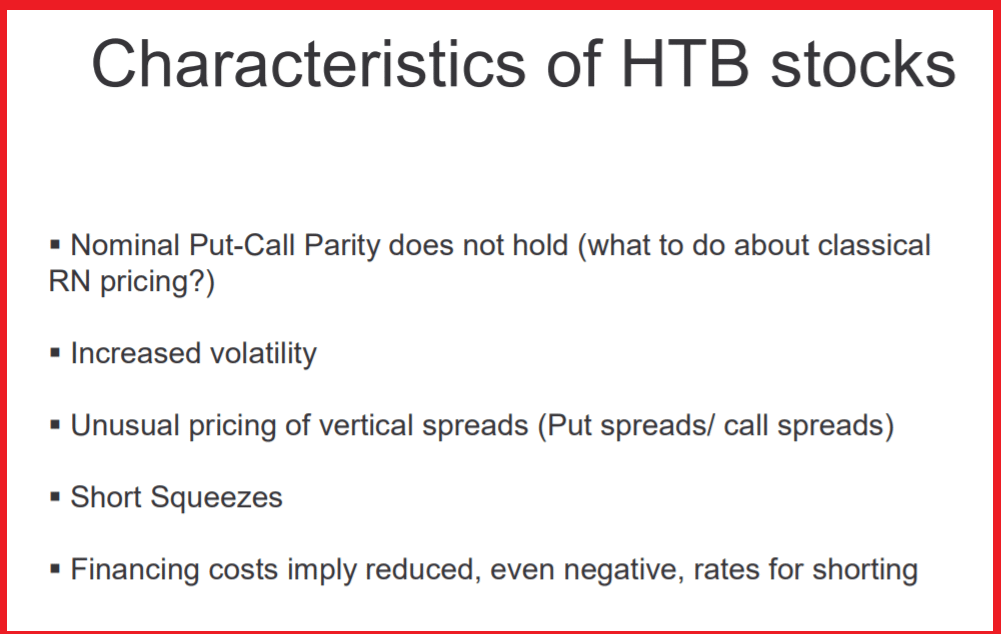 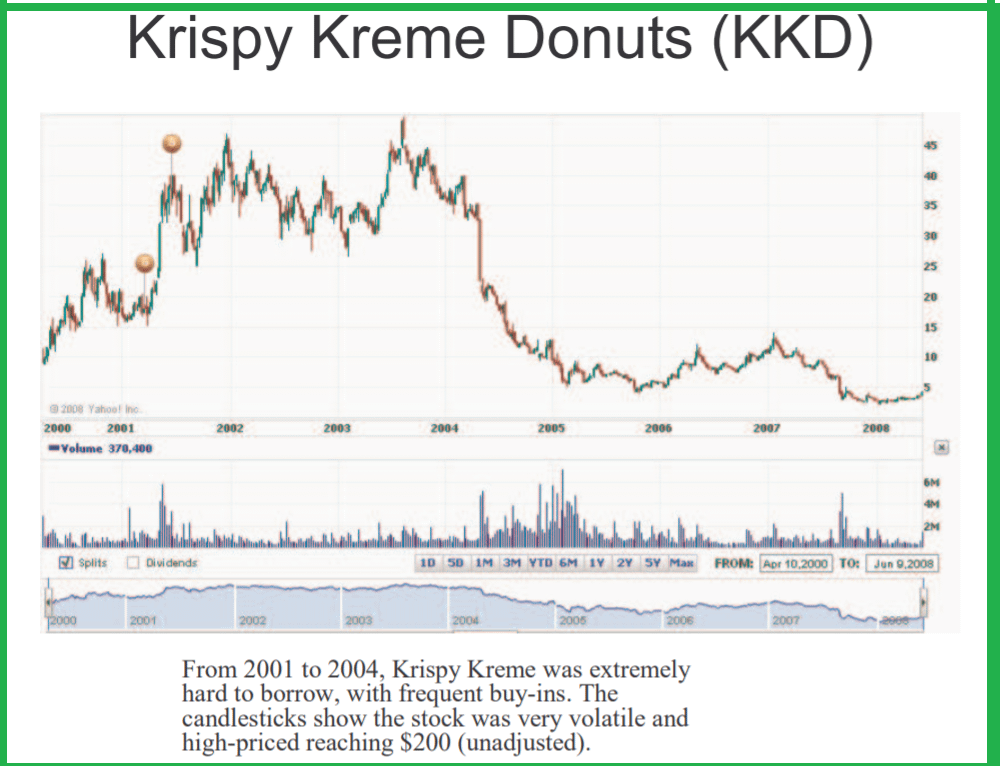 It fucking squeezed or some shit from being so hard to borrow and even reached a high of $200!

Also this chart is alllll the fucking proof you need that negative cost to borrow rates exist. Don’t let Ortex gaslight us: 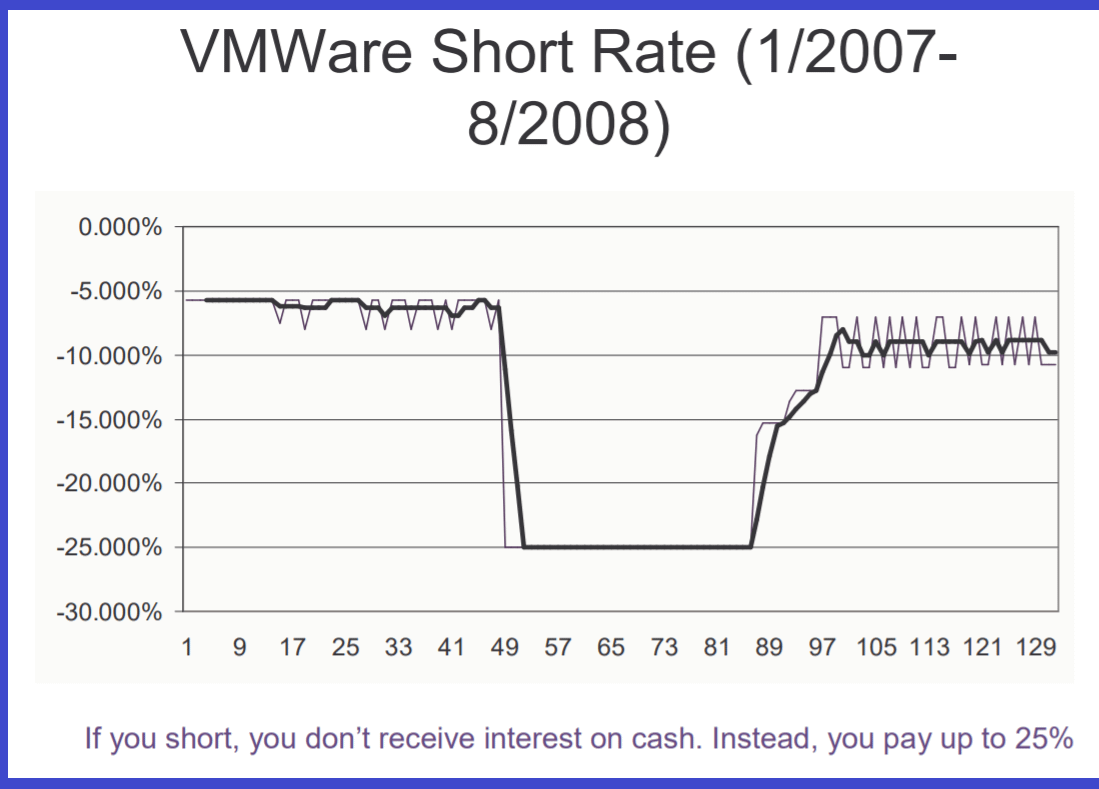