TLDR: GameStop will issue a carve-out of GME Entertainment, this will be all of the things not associated with traditional e-commerce products. This will issue new stock/tokens onto their blockchain exchange. This precedence was set by the Slack lawsuit ($WORK), and requires a tombstone pr announcement and a share recall/count happens after announcement. I would guess as a dividend they would also issue shares/tokens of GME-E to existing shareholders. Shorts are fucked and brought into the daylight using blockchain tech. Oh and pretty sure I figured out the infamous ice cream cone tweet 🙂

We know that GME’s hire posts have had “carve-out experience” in them, here are some examples of this: 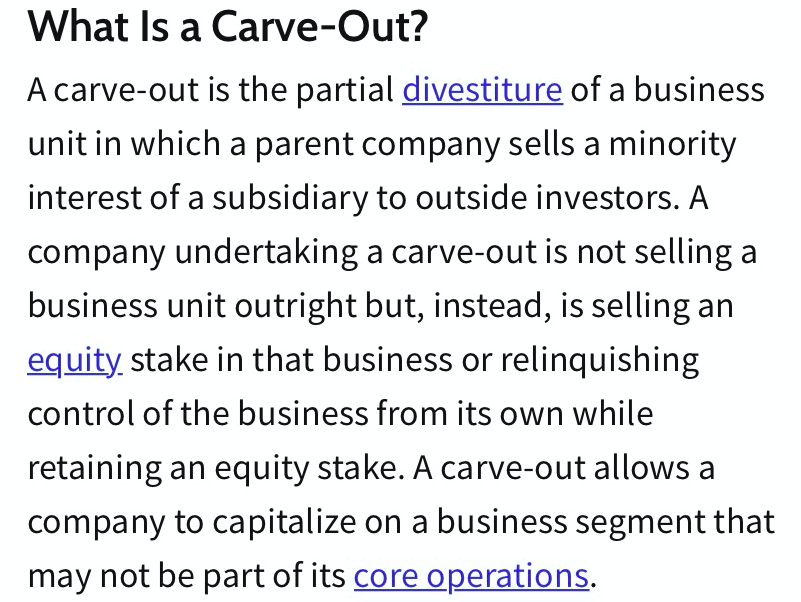 What does a DPO have to do with a potential GME carve out? What is a DPO? Well mainly carve outs are a way to increase funding for growth companies, typically they are offered as an IPO or a DPO. Essentially the carve-out is usually offered to the public to generate cash and if the carve-out doesn’t fit the mold of the parent company’s underlying infrastructure. Issue shares/tokens on exchange for cash basically. Some prominent examples of companies who have DPO’d are Slack, Spotify, and Ben and Jerry’s (at origin).

So how is all of this potential carve-out->DPO associated with Slack ($WORK)? Well they just lost a lawsuit against retail because they did not protect their restricted stock and they could not trace the lineage of the shares offered during their DPO. They lost. We won. The burden of proof is on the DTC and they just fumbled a HUGE lawsuit for blockchain tech to take control of securities. We have legal precedence to use blockchain if we think the system is not working fairly in our favor. The number one issue was TRACEABILITY..MASSIVE WIN. 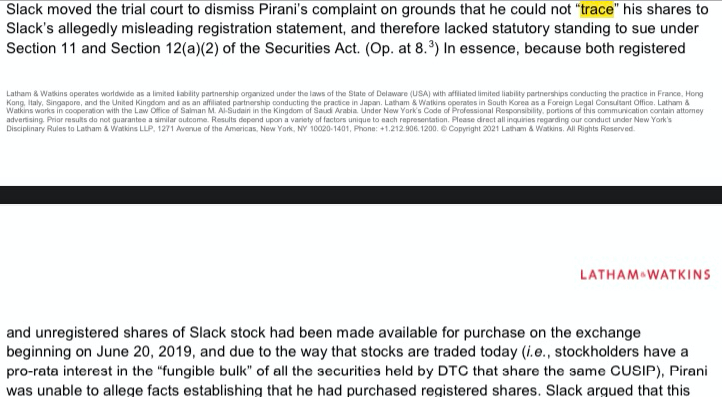 Also Cohen tweets about WORK are picking up traction.. his initial one had this sub going crazy down the rabbit hole of slacks lawsuit. 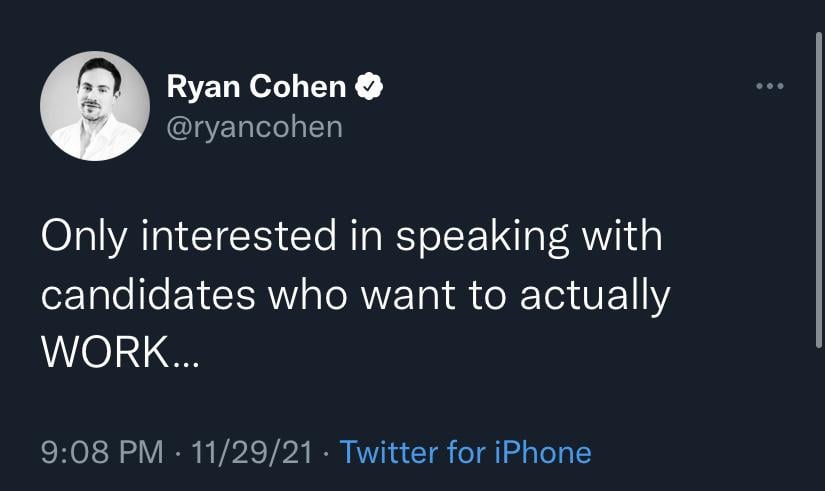 TLDR of lawsuit: Slack didn’t protect restricted stock and couldn’t trace it and their retail investors got fucked because even the DTC couldn’t trace them. If only there was a blockchain exchange that could house this carve-out security……… oh shit.

So a DPO of their carve-out seems to be the plan. How would it be initiated? 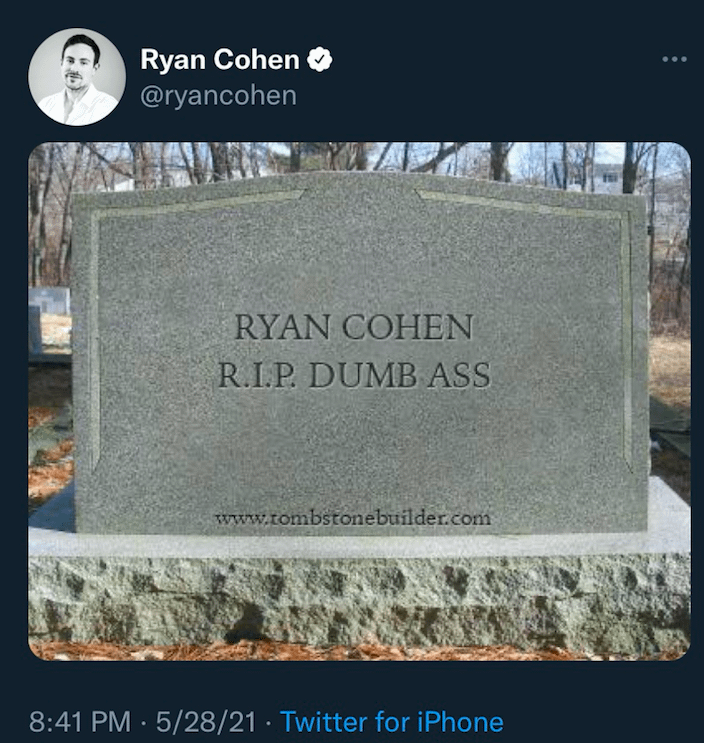 I wonder who the first person to issue a DPO was, maybe the apple doesn’t fall far from the tree eh?

GOT TO BE KIDDING ME. First one to ever do it was B. Cohen who started an ice cream business. BEN COHEN/RYAN COHEN

Wait a second? I think i remember a tweet from our beloved chair about a cone… everyone tweaking about how an ice cream cone was tied to cycles theories like bro what the fuck r u talking about? I’d guess this is it given his tombstone tweet was posted in the same timeframe. 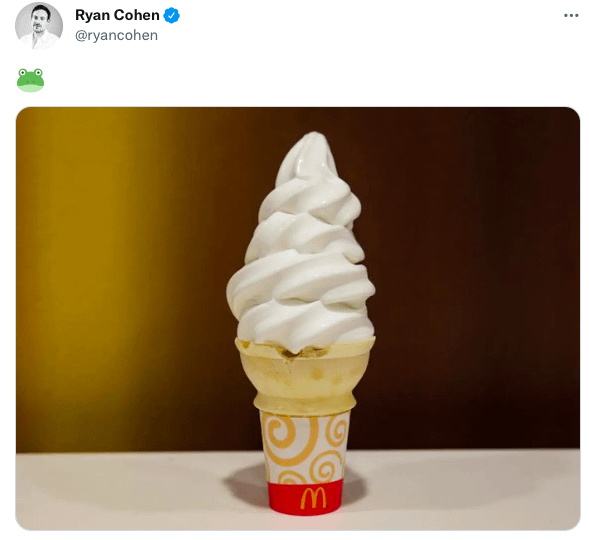 Also in the tombstone generator Cohen inserted his name as the death date, god mode.

He is when they die, he is the end game. and literally used a website called “TOMBSTONEBUILDER” he’s literally screaming at us “WE ARE GOING TO DPO YOU LOVABLE IDIOTS!”

I remember Larry Cheng posting about understanding your customer base as a way to fine-tune how to generate cash whether it be DPO or IPO. Customers that a apart of a loyal customer base (us) usually DPO 9 times out of 10 compared to an IPO. I remember something about exponential growth curves as well that ties into this but cannot find it.

Hedgies are so fucked, blockchain will be implemented in a DPO, we will all be rich.

Edit: just realized the sugar daddy tweet as well. Like 50 years ago they were on the verge of bankruptcy (tootsie) and the owners essentially went door to door and had a grass roots movement that had retail almost take them completely private. They became registered shareholders. To this day 75% of all holdings are still retail/non insider. DRS YOUR FUCKING SHARES OR GET LEFT BEHIND!!

To add more speculation that is entirely just speculation. Maybe they will also issue some of these targeted companies on there as well. Toys R Us/ BBBY/KOSS.

60s music and pillow fights is BBBY and KOSS -sonographic record of Beatles saved their company? -will they be issued on exchange too?

7 for 1 offering could also tie into this DPO/Issue as well? (TINFOIL not connected at all besides cohencedence in time)

A FUCKING STOCK SPLIT ON SAME DAY I FINALLY POST THIS YOOOoOooO. ISSUE MORE SHARES, LET THEM DO THEIR FRAUD EVEN MORE, THEN PUT IT ON BLOCKCHAIN AND WATCH THEM SCRAMBLE FOR EVEN MORE SHARES. LETS GO.

One Reply to “GameStop is planning on DPO’ing GME-E onto blockchain exchange. Cohen’s tweets deciphered. GG.”