Most Americans believe that a rising tide should lift all boats—that as the economy expands, everybody should reap the rewards. This outcome can be guaranteed by smart and compassionate policy choices or subverted by policymakers choosing a different path. EPI’s Productivity–Pay Tracker shows the shift toward the latter: Since the late 1970s, our policy choices have led directly to a pronounced divergence between productivity and typical workers’ pay. It doesn’t have to be this way. 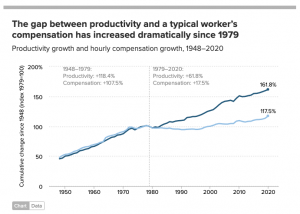 Notes: Data are for compensation (wages and benefits) of production/nonsupervisory workers in the private sector and net productivity of the total economy. “Net productivity” is the growth of output of goods and services less depreciation per hour worked.

Productivity has grown 3.5x as much as pay

Productivity measures how much total economywide income is generated (i.e., for workers, business owners, landlords, and everybody else together) in an average hour of work. As productivity grows and each hour of work generates more and more income over time, it creates the potential for improving living standards across the board.

In the figure above, pay is defined as the average compensation (wages and benefits) of production and nonsupervisory workers. The pay for this group is one appropriate benchmark for “typical worker pay” because production and nonsupervisory workers have made up roughly 80% of the U.S. workforce over the entire period shown in the figure and because the data for production and nonsupervisory workers exclude extremely highly paid managerial workers like CEOs and other corporate executives. As the figure shows, pay for these workers climbed together with productivity from 1948 until the late 1970s. But that didn’t happen by accident. It happened because specific policies were adopted with the intentional goal of spreading the benefits of growth broadly across income classes. When this intentional policy target was abandoned in the late 1970s and afterward, pay and productivity diverged. Relinking pay and productivity so that workers share in the fruits of their labor will require another pronounced shift in policy.

Click here for more on policies and the pay–productivity gap

What broke the link between pay and productivity?

Starting in the late 1970s, policymakers began dismantling all the policy bulwarks helping to ensure that typical workers’ wages grew with productivity. Excess unemployment was tolerated to keep any chance of inflation in check. Raises in the federal minimum wage became smaller and rarer. Labor law failed to keep pace with growing employer hostility toward unions. Tax rates on top incomes were lowered. And anti-worker deregulatory pushes—from the deregulation of the trucking and airline industries to the retreat of anti-trust policy to the dismantling of financial regulations and more—succeeded again and again.

In essence, policy choices made to suppress wage growth prevented potential pay growth fueled by rising productivity from translating into actual pay growth for most workers. The result of this policy shift was the sharp divergence between productivity and typical workers’ pay shown in the graph.

From 1979 to 2020, net productivity rose 61.8%, while the hourly pay of typical workers grew far slower—increasing only 17.5% over four decades (after adjusting for inflation).

A closer look at the trend lines reveals another important piece of information. After 1979, productivity grew at a significantly slower pace relative to previous decades. But because pay growth for typical workers decelerated even more markedly, a large wedge between productivity and pay emerged. The growing gap amid slowing productivity growth tells us that the same set of policies that suppressed pay growth for the vast majority of workers over the last 40 years were also associated with a slowdown in overall economic growth. In short, economic growth became both slower and more radically unequal.

If the fruits of economic growth are not going to workers, where are they going?

The growing wedge between productivity and typical workers’ pay is income going everywhere but the paychecks of the bottom 80% of workers. If it didn’t end up in paychecks of typical workers, where did all the income growth implied by the rising productivity line go? Two places, basically. It went into the salaries of highly paid corporate and professional employees. And it went into higher profits (i.e., toward returns to shareholders and other wealth owners). This concentration of wage income at the top (growing wage inequality) and the shift of income from labor overall and toward capital owners (the loss in labor’s share of income) are two of the key drivers of economic inequality overall since the late 1970s.

How can we fix the problem?

For future productivity gains to lead to robust wage growth and widely shared prosperity, we need to institute policies that firmly connect pay and productivity and build worker power. For a description of many promising policies, see EPI’s Policy Agenda—notably the sections on worker power, good jobs, and full employment. Without policy interventions, economic growth will continue to sputter, and the growth we do see will largely fail to lift typical workers’ wages.

Where can I learn more about the productivity–pay gap and how to close it?

A series of EPI reports over the last several years track wage trends and racial wage gaps and their relation to the productivity–pay disconnect. Two foundational papers explain in detail how we measure the productivity–pay gap and why broad-based wage growth is our central economic challenge.

Click here for more resources on the pay–productivity gap

How does EPI construct the pay–productivity graph?

EPI makes a series of data choices to construct the indices of productivity and pay in the chart above. Our data choices reflect our end goal: to compare growth in the typical worker’s pay with the potential growth in living standards (consumption) that productivity growth represents.

In brief, we begin with a measure of labor productivity—economywide income divided by total hours worked in the economy. We measure productivity for the broad economy—not just the “nonfarm business sector”—by accessing nonpublic data sources that count outputs from farms, government agencies, and nonprofits. We adjust these calculations for depreciation, and then further for price inflation.

The pay measure starts with the average hourly wage of production and nonsupervisory workers in the private sector, who account for roughly 80% of private-sector workers and thus are a good proxy for the “typical” worker. We adjust this wage for inflation and add inflation-adjusted estimates for nonhealth benefits and health-specific inflation-adjusted estimates for health benefits to arrive at a measure of typical worker pay.

How does EPI’s Pay–Productivity graph compare with other versions?

EPI’s pay–productivity graph helps answer a very important question: Do typical workers in the United States share in the benefits of economic growth? The big and growing gap between productivity and pay growth answers that with a resounding “no.” But in order to see this clearly, all of the adjustments we have made to the data are necessary. Failing to understand the role of these data adjustments in highlighting the failure of productivity growth to redound to the benefit of typical workers has led many to focus on inappropriate measures of both productivity and pay, and this has led them to come to wrong conclusions.

How much of the pay–productivity gap is driven by inequality?

Beginning with the August 2021 update, the entire gap in EPI’s pay–productivity figure is associated with rising inequality—inequality among wage earners and the rising share of overall income going to owners of capital rather than to workers for their labor. However, since researchers and analysts may still be interested in factors that account for various parts of the wedge between our measure of pay and other measures of productivity, we decompose these gaps further.

Click here for more on other factors driving the gap