As someone who has watched trading screens for the past 36 years, it’s pretty easy to spot a fake market. As the charts below indicate, there is an invisible hand (or hands) pushing this stock market up when it should be plunging. The likely suspects are U.S. Treasury Secretary Janet Yellen’s Plunge Protection Team, known as the Exchange Stabilization Fund; foreign central banks that are aligned with the U.S. position on Ukraine and want to help stabilize financial markets in the West; hedge funds and Wall Street’s Dark Pools owned by megabanks that are net long the market; or a combination of all of the above.

One thing’s for sure, the stock market is not responding in a normal fashion to soaring inflation, a hawkish Fed, spiking interest rates, and military aggression by an out-of-control dictator with 6,000 nuclear warheads.

Consider the chart below: since the Russian invasion of Ukraine on February 24, the yield on the 10-year U.S. Treasury note has skyrocketed by 20 percent, currently reaching 2.38 percent. That was a correct and normal reaction since inflation is already soaring in the U.S. and the military aggression is going to disrupt oil and gas supplies from Russia via sanctions, thus likely pushing commodity prices even higher. In a normally functioning stock market, an increase in yield of that magnitude on the 10-year Treasury note would have caused the stock market to plunge. Instead, per the chart below, the S&P 500 stock index has actually risen 5 percent since the Russian invasion of Ukraine. 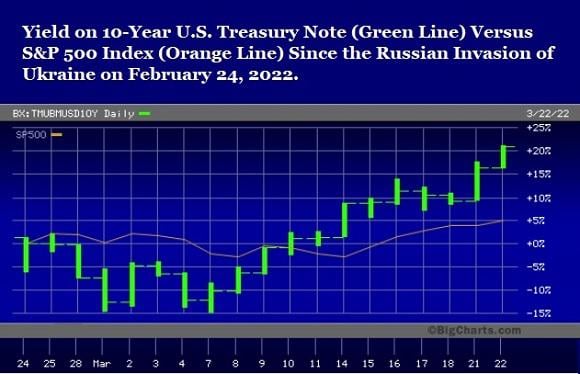 Yield on 10-Year U.S. Treasury vs S&P 500 Since Russian Invasion of Ukraine

The stock market’s bizarre behavior is further evidenced by the chart below. It shows how the S&P 500 stock index has performed in relation to the S&P GSCI commodity index since the Russian invasion of Ukraine on February 24. Notice particularly how the dramatic spike in commodity prices between February 24 and March 8 was not met with a dramatic plunge in stock prices during that same period. It should have been. Then there is the equally important fact of a big yawn from the stock market as a nuclear power invades a sovereign nation of 44 million people, bombs its cities and towns to rubble, and persists in making threats against the U.S. and allies that are supporting Ukraine. Commodity Prices vs S&P 500 Since Russian Invasion of Ukraine 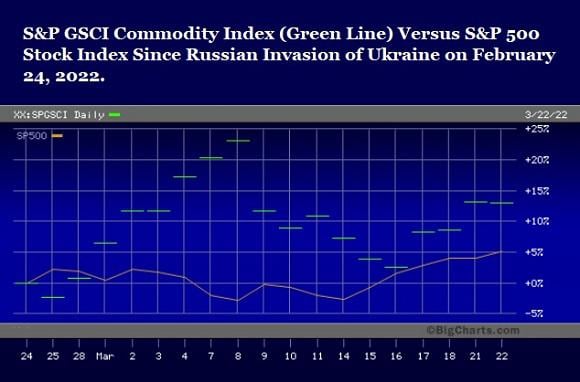 Commodity Prices vs S&P 500 Since Russian Invasion of Ukraine

And, finally, there is the disparate reaction of the stock market versus the correct share price reaction of the global banks that will be impacted by the Russian invasion. The chart below shows the radically different response from the stock market, as measured by the S&P 500 index, versus global banks since February 1, 2022. We selected the date of February 1 because that was the point at which Russia had amassed 100,000 troops near Ukraine’s borders, backed up with tanks and artillery. The global banks shown on the chart below are those with significant exposure to Russia. The worst performing of these, Austria’s Raiffeisenbank, has lost 50 percent of its value while the S&P 500 is down less than one percent from February 1 as of yesterday’s market close.

The stock market is supposed to be an efficient pricing mechanism. When it stops efficiently pricing risk, it loses the public’s confidence. Those invisible hands should think long and hard about that reality. 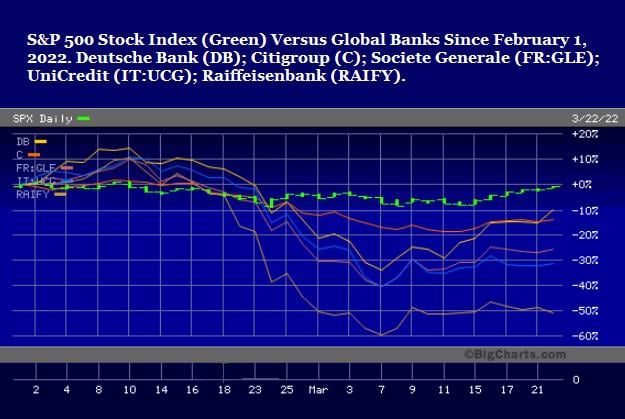