Below is a summary of points that I’ve gotten from browsing Reddit about the BBBY Sneeze.

Rumor has it that this wasn’t a squeeze, but rather a pump and dump (by the shorts). Now, BBBY was doing a stock buyback, which naturally squeezes the shorts at least a little bit. 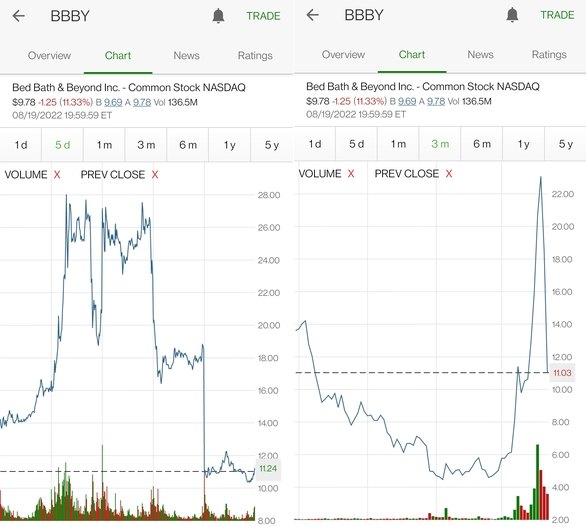 However, there was no talk of DRS’ing BBBY, while this was happening, and knowing that DTCC provides “infinite liquidity”, the argument that the parabolic price increase was due to the share buyback, is moot.

Now, Ryan Cohen told his stake in BBBY at the peak. (Very smart on him, by the way.) After that the stock crashed down, not as low as it was, but losing more than 50% off the peak. I imagine a lot of people who FOMO’ed long, lost money on this.

Rumor has it that Ryan Cohen had to sell his stake in order to move forward the idea of spinning off BABY (buy buy baby), or doing any other similar corporate action such as merger or aquisition.

Now I personally don’t believe Gamestop will buy BBBY or BABY. But as Ryan Cohen clearly, publicly expressed himself, BABY can be spun up as a separate entity, improving the finances of both entities.

Below is a piece of research published on Reddit, arguing that Ryan Cohen actually had to sell his stake, in order to move forward with the split of BBBY and BABY.

It’s possible that short hedge funds (SHF’s) went long on BBBY, making their balance sheet look great by booking in collateral at the peak of the BBBY sneeze, a few days ago. But I don’t know how that works.

How does this relate to Gamestop? The underlying properties haven’t changed much. We’re still on track in this battle of DTCC vs Retail investors.