The manly u/habitualpotatoes (hope he doesn’t stick ’em anywhere) has written the below.

Hot off the press today: You can find Citadel Securities (Europe) accounts up to December ’21 here. https://find-and-update.company-information.service.gov.uk/company/05462867/filing-history

I’ve spent some time digesting – but it’s massive changes from their last filing and I will try and post as I unpick things.

Mainly though – IMO and not financial advice – I am a regarded Ape only, but I think that Citadel Europe was the cause of 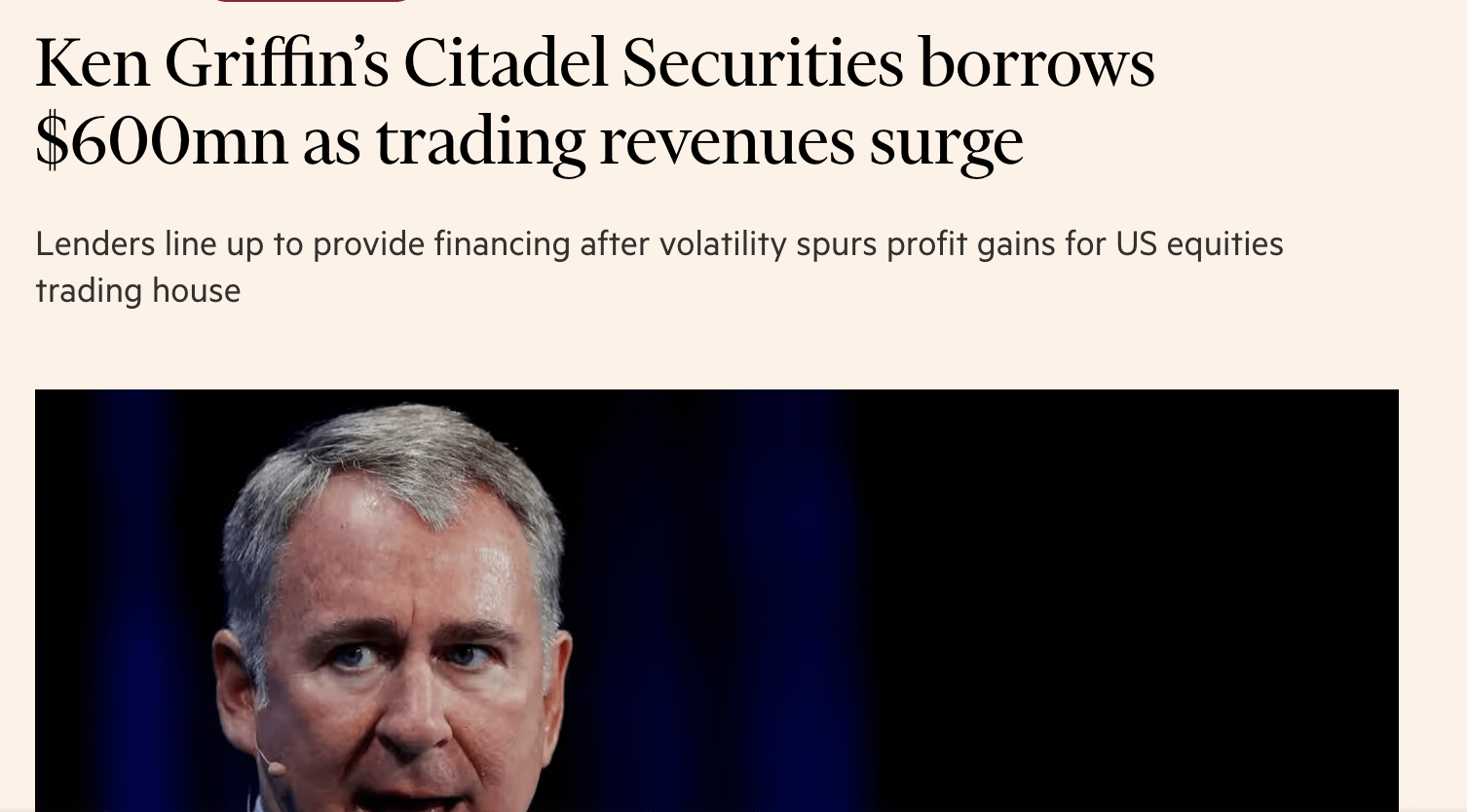 These charges were filed against Citadel Securities (Europe) in August and September from various lenders, shortly after Kenny G took a personal interest – and therefore provided his personal credit rating shield

Now the super spicy part from the latest accounts: 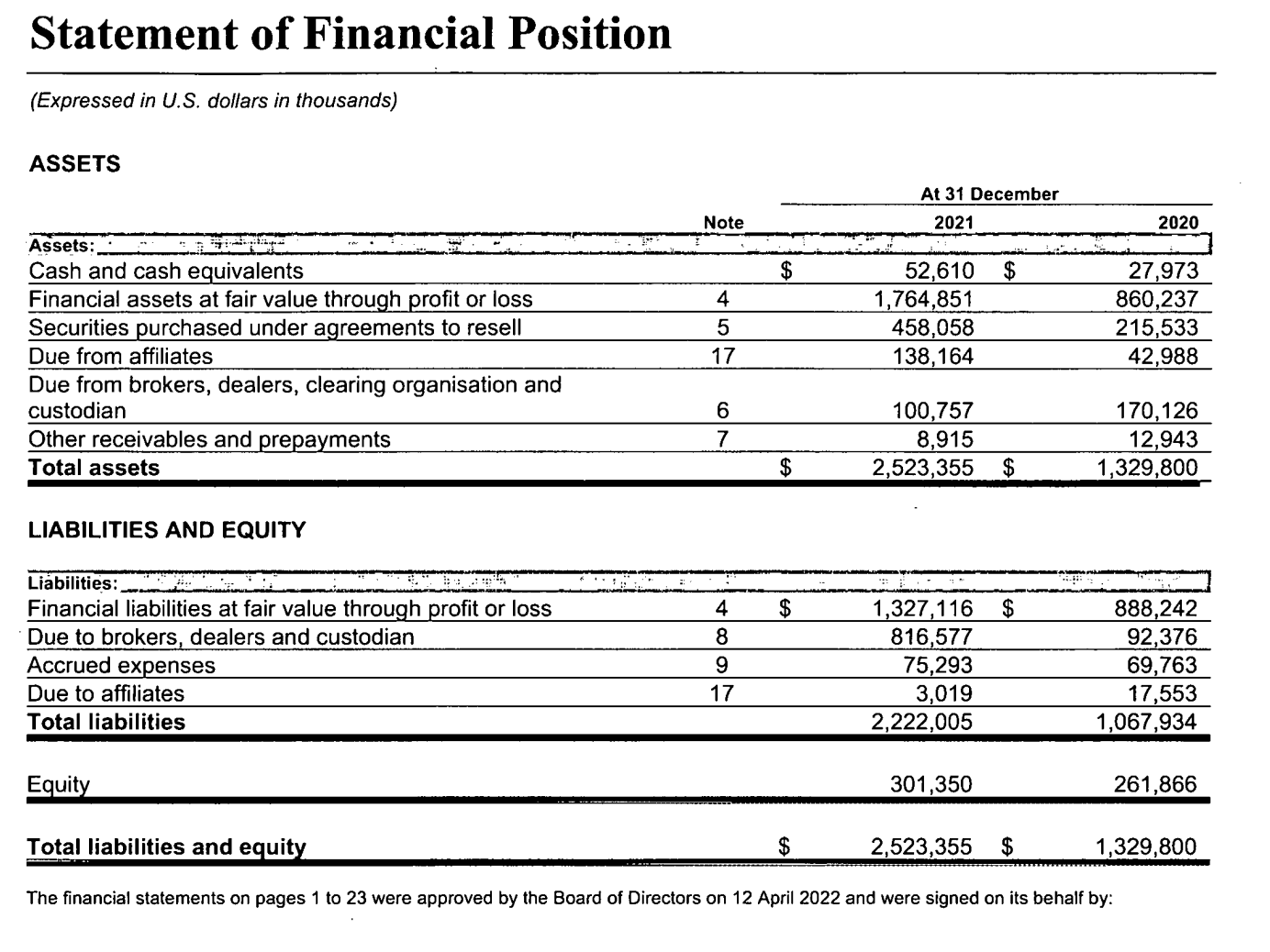 Don’t see it yet? 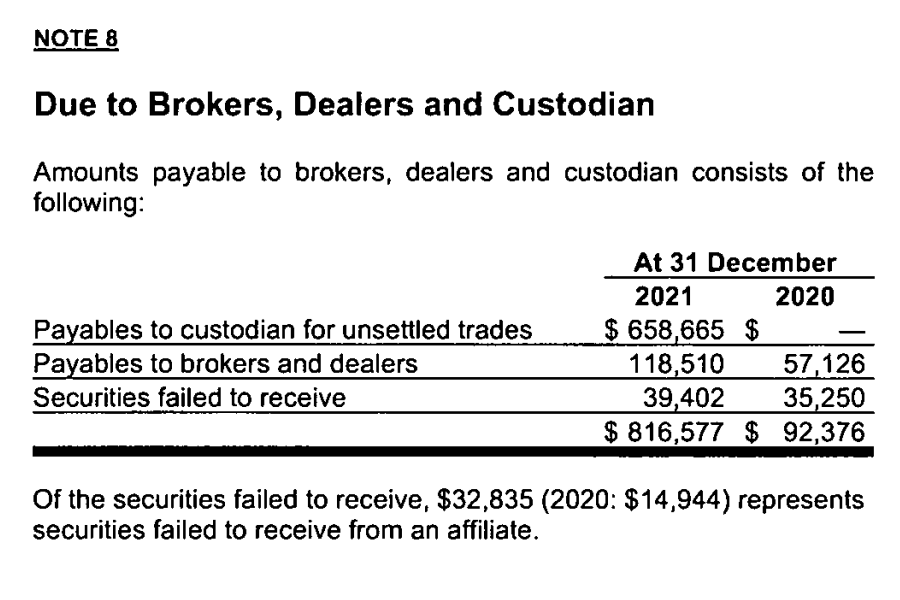 AKA the big boys

But it’s not an issue right – a nothing burger because they’re still solvent right?

Well, not really in my very limited knowledge opinion. Because this $600m+ was due – as in collector knocking at the door due – within 3 months of the end of ’21.

Whereas the assets that balance this liability are exactly that assets – that need to be sold. The company only reported $48m of ‘high-quality liquidity’ i.e. you can cash it in straight away and get the reported value for it:

So they had a bill for $600m+. And had access to only $48m. Which means they either have to sell off assets below the reported value or get a payday loan.

So why not sell off assets?

Because they only generated $48m of income in the first place, well down on the previous year:

And $48m income is reliant on them reporting a gain $119m on the $1.7b of assets they reported at fair value.

So if they had to firesale lets say 40% of the assets they held to pay $600m+ due within 3 months – what discount would be applied to the fair value?

The company only has $300m equity – including the ‘fair value’ measurement of assets.

So they couldn’t pay the bill – IMO – without liquidating the whole company – or getting loans.

EDIT 2: Woah – Citadel restructured CITADEL SECURITIES FINANCE (UK) LIMITED during 2021 as well – so that it became the owner/main investor and loaner to all of its Asian/Eastern business units. Interestingly they gained a bunch of charges after Kenny G took control:

And lo and behold – let’s see how much cash they had owing to Brokers – within 1 month!!! 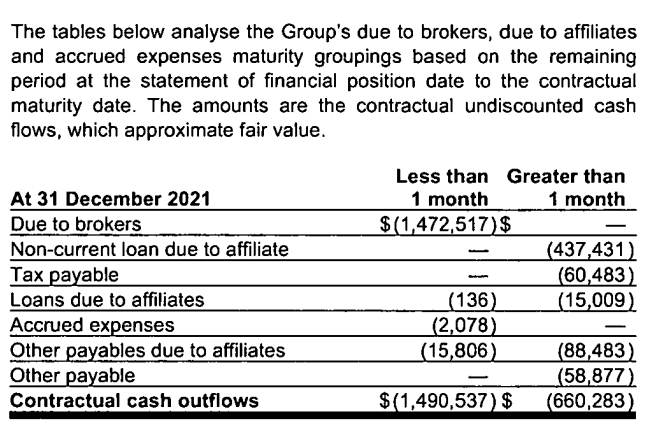 So only $582 of the $1.6b financial assets they own would need to be liquidated / 36% of their assets – in order to pay cash due within 1 month – unless they used a loan or came up with some deal.

They’re running out of cash all over the place and trying to extend payment terms to counter it.

EDIT 3: Thanks for all the comments and wanted to quickly jump on the chat about swaps that is cropping up. These statements are only for the UK based companies and do not reflect the US ones, other than you can see how much dividend has been paid out, or fees or similar.

The swaps are reported in these reports – and aside from them being able to use crime to hide things – are pretty clean. In fact Citadel Securities (Europe) pretty much stopped completely a massive interest rate swap contract play, valued around $1.3b, they were using the year before. I expect if we ever got reporting like this in the US, it would be a very different situation.

EDIT 4: God damn it. I forgot about this:

$1.2bn is approximately the debt due to brokers and custodians for Citadel Europe and Citadel Eastern (short hand names) less cash that they had on hand. And it closed in January 2022 – right when they had to pay up…