Good day everyone. Unless you’ve had your head buried in the sand the past couple of weeks, you know that oil prices have soared due to the Russia/Ukraine conflict. I decided to start writing a DD to help explain the deeper reasons why we are seeing these price increases, besides what the MSM and the rest of Reddit would want you to believe and how this could trigger a global recession. I actually quit writing it because I’m old and feel like my DD seems juvenile compared to what I read on here. Thank you u/throwawaylurker012 along with many others for the encouragement to revist this.

First, a little background as to my qualifications. I have over 20 years in the oil and gas industry (second generation) and am currently a drilling consultant, which is basically the guy in charge of operations on the well site who implements the operator’s drilling program and safety policies. My family has working interest in oil leases along with friends in all areas of the industry including CEOs, COOS, oil marketers, oil traders, managers at many drilling contractors and service companies, etc. My knowledge of the industry isn’t useful to most people, except during times like this.

Please bear with me. I’m not good at this type of thing and this could probably be made to look nicer by a 10 year old.

Brief history of US shale

Many of you may or may not remember the crazy swings we have seen over the past 15 years in oil prices, but I’ll do a brief recap to set everything up.

Back in the early 2000s, the supply of crude oil started getting tight which caused prices to get over $40/bbl. As sad as that number is now, it was significant back then and caused a drilling boom. Someone got smart and realized the potential of unconventional shale plays like the Bakken and Permian plays. The problem was that needed to be stimulated (fracked) in order to break down the tight rock that holds the oil. This lead to a massive amount of innovation and technology in a very short amount of time, which helped transform how everyone drills/completes their wells to where we are today.

Back then, a one mile lateral would take a rig over a month to just drill. Then they’d move to another pad and drill another well. Now we drill two and three mile laterals and the average two mile lateral takes about 9 days from start to finish in the Bakken. Plus, they drill 3, 5, even 7 well pads all at once before moving. Completing a well has gotten a lot more complex, but is ultimately what will bring as much oil as possible to surface and has also increased the EURs (Estimated Ultimate Recovery). With all of this efficiency, the rigs required to get more oil to market dramatically decreased. 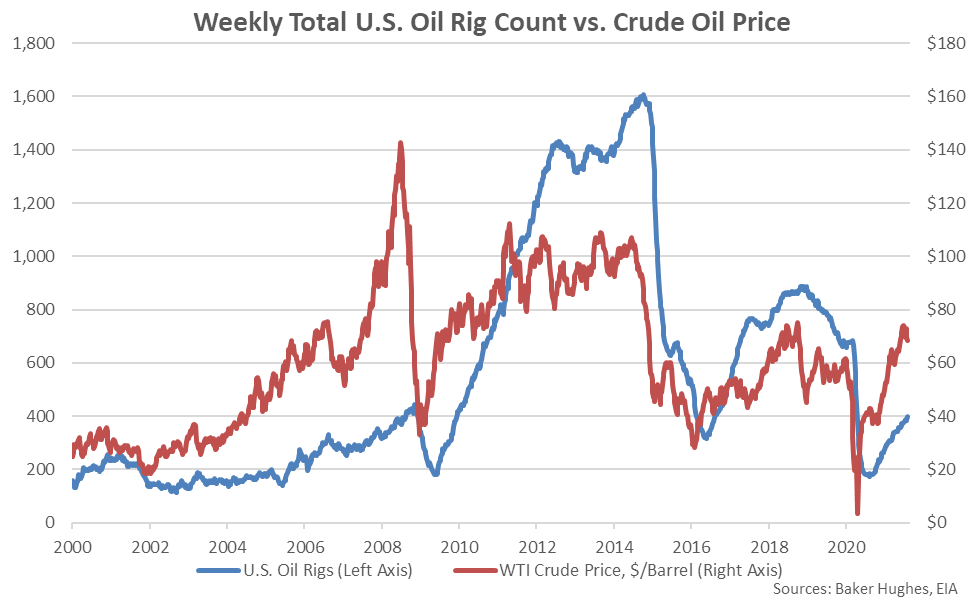 That rig spike around 2010 is when the Permian started becoming more attractive, but you can see that in 2014 when the price dropped crashed that the rig count never really got above the 50% level from the high. This is important because shale oil has a steep decline curve during the first year before starting to flatten.

The stock prices for every single oil related company, to which the banks told all producers to drill within cash flow. The producers complied and proceeded to try and reduce costs by making all the service companies almost give away services. Most service companies went broke and those that are left are in control now.

That’s the boring part and I promise this gets better.

I’m sure everyone remembers when oil went negative in March of 2020. Well what happened there was that we were at the end of a trading month, traders had to get out of their positions or take delivery on that oil. There was absolutely no storage available at that point and I don’t know any traders that have any tanks in their back yards to hold oil, so they had to pay someone to take it. That has since been fixed and you can now cash settle.

As you can see the rig count went to 1/8th of peak rig count. What happens when you have these huge swings in rig count? You have to hire like crazy and on the flip side let everyone go at the snap of a finger. It’s absolutely brutal watching these people get hurt, but it’s a fact of life and something all the old guys try to stress to new hires. You’re only going to hurt these people a couple of times before they just completely swear off the industry and find more stable work. Now everyone wants a rig and nobody can get them, besides those that already have them.

Not only can the industry not drill more, but there’s also supply shortages due to COVID and less manufacturers of essential parts and equipment like casing. This is not unique to the US and in fact North America is the only place increasing rig count while the rest of the world’s drops. The US rig count actually dropped last week if you can believe that shit.

One really juicy thing that happened earlier this year was when it was discovered that the IEA, International Energy Agency, lost 200 million bbls. I’ve had my suspicions for awhile that these government agencies were manipulating data, but that’s the only proof I’ve had of it. Basically, they were over reporting supplies and under reporting demand.

I know TA gets a bad name around here, but it really is important. While supply and demand is definitely a part of the equation, the people who trade oil are usually using TA and algorithms to make money.

We don’t know what kind of spare capacity any of the OPEC nations have or Iran. It’s all speculation, but we do know that after OPEC raised production a couple months ago, 14 out of the 18 nations failed to meet their higher quotas. This leads me to believe that there’s much, if any, spare production to bring online. 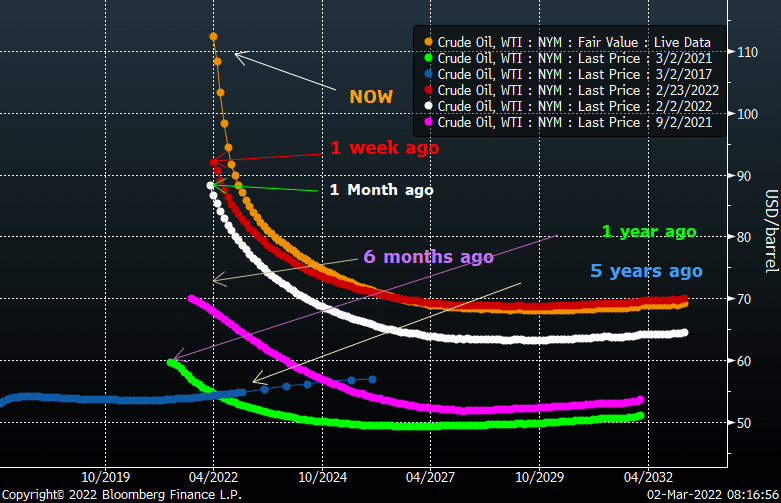 The above chart is about a week old, but represents the amount of fear there is in short term price rips. Oil gapped up $6 when the oil market opened last night overseas and is a perfect example of this.

This chart shows backwardation, the price for the current month compared to a time in the future. As you can see, this is the biggest discrepancy we’ve eve seen. This tells us that the market is so tight that they’re trying to entice as much oil to market as possible. I even heard last week that Bakken crude was getting a $5 over spot price, which is absolutely insane. You usually lose $4-10 to put it in the pipeline.

My oil trader buddy and I were talking last night and the next resistance is at $132. If we have to closes over $130, the Fibonacci has us going to $156 next.

I will preface this by saying that most of this will be speculation, but it does make sense with the above proof.

Bank of America came out today and said the price of oil could move $20 per 1 million bbls of oil. Russia exports 7 million bbls/day and the world wants to shut that off. China and India will continue to buy some of that oil at a discount, I saw a report of $28/bbl last week which is still $100/bbl. So lets say 2.5 millon bbls comes off the market, that could spike prices well over $150/bbl. The sanctions on Iran have killed their oil production, because no operators will go in and work on them. They’ve been selling oil this entire time and aren’t exactly sitting on a pile of oil ready to sell and ship to market.

What happens when you have a shock to the system like a massive increase in energy prices? 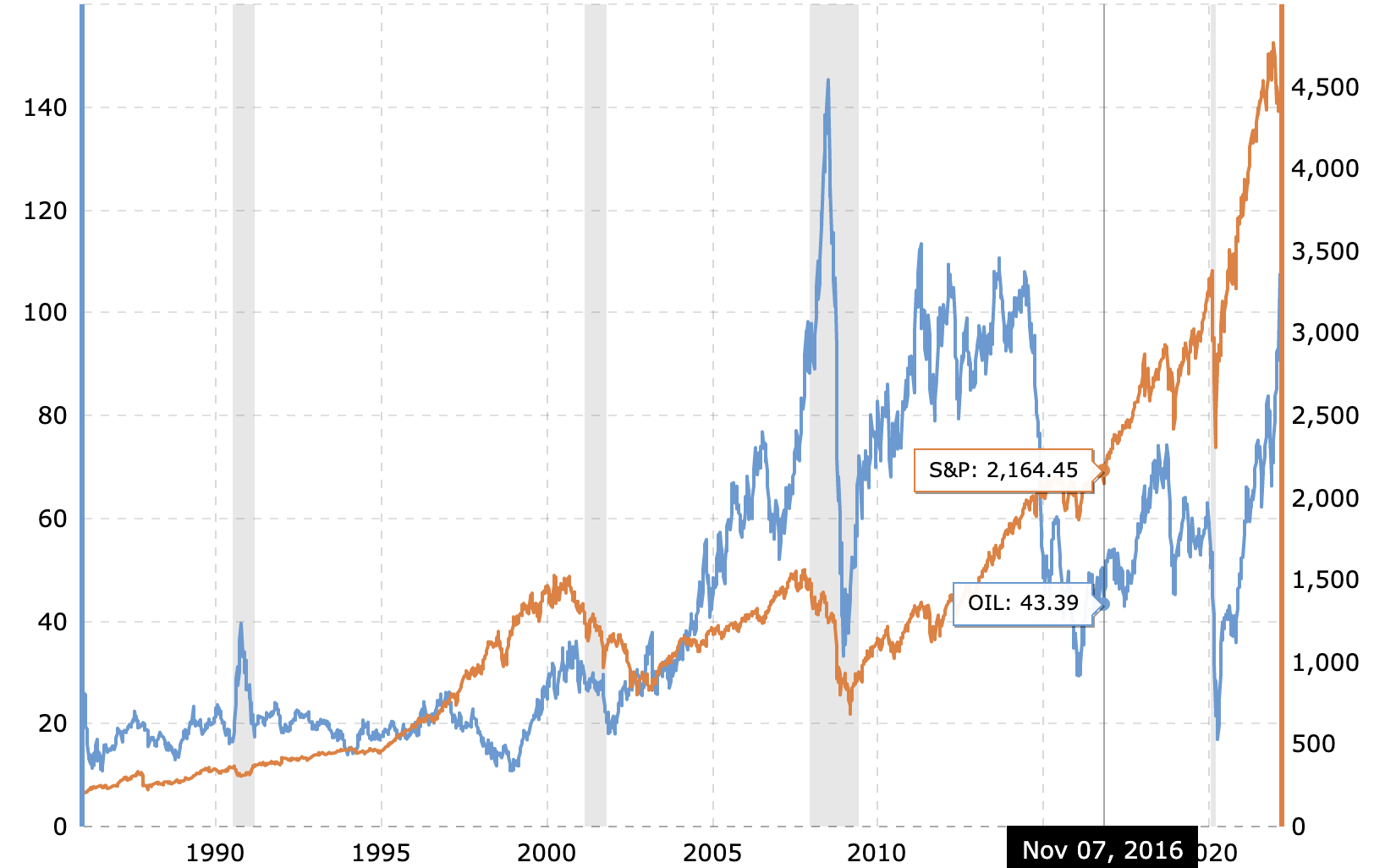 A global recession is what happened last time. Yeah everyone likes to point the finger at subprime mortgages, but an argument could be made that it was the dramatic spike in oil prices could’ve been the market catalyst to put enough pressure on the cracks in the system to make it all crash.

Hmmm, is there any dirty little secret in the market right now that has these banks way overleveraged? Cough naked shorts cough.

You combine all of this with the amount of debt in the world right now: 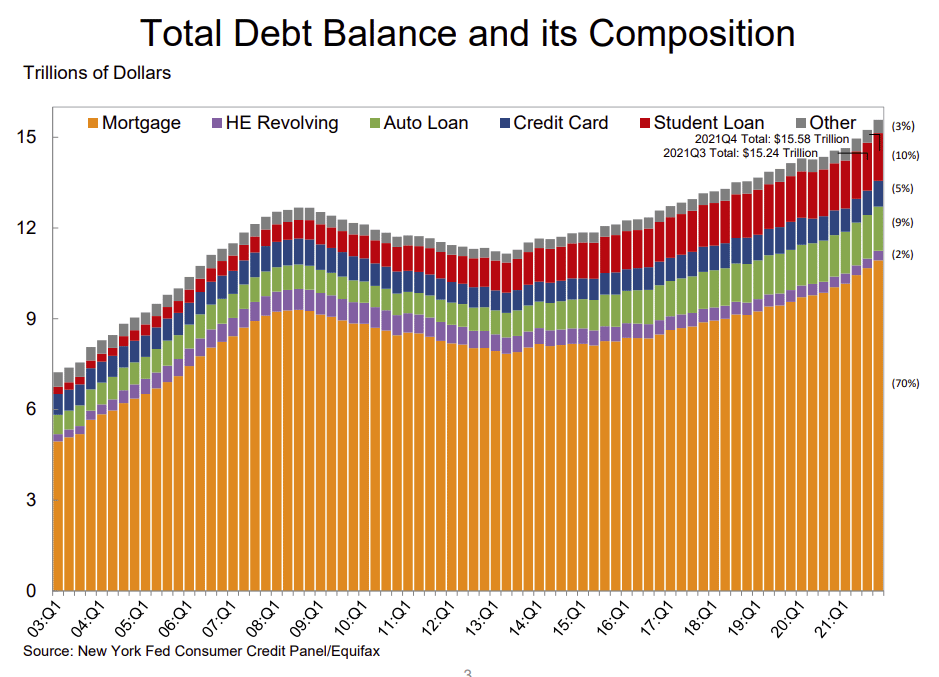 and you get all the ingredients needed for a very ugly event.

Oil prices have a lot of room to the upside and there’s no way to bring on more production in the short term. Anywhere from $80 – $156 is possible depending on what happens with this Russia/Ukraine conflict. This type of shock to the world economy could cause a global recession and a market sell off.

What does a market sell off do for our favorite stock? I’ll let previous DD speak for itself and let you all come to your own conclusions. I just think it’s important for everyone to have as much information as possible and not rely on morons like Cramer that give you the narrative that his boss wants you to think.

Disclaimer: I’m retarded, I’m a xxxx holder and love DRS, and this is not financial advice.

I’m sure I missed some things and would be happy to answer any questions you all may have. Please poke holes in anything I have said and prove me wrong.