The proliferous u/Conscious_Student_37 wrote the below: 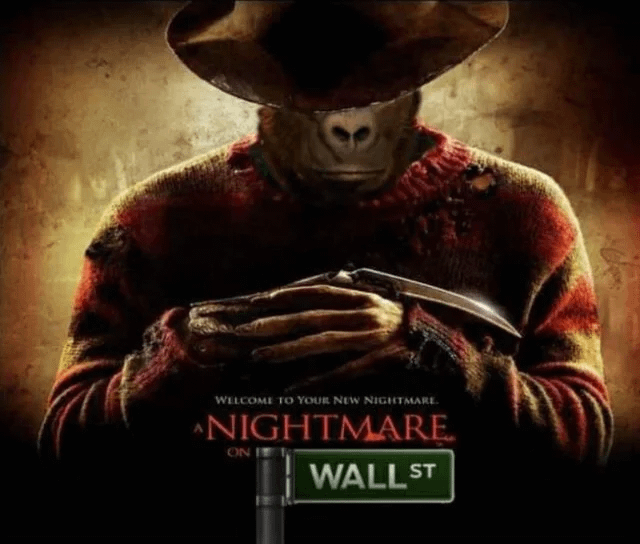 As you may have heard, the SEC experienced a glitch that resulting in the loss of a couple hundred comments that were submitted but not posted. As a result, they RE-OPENED comments for a number of rules, which allows people to not only repost their comments, but also – and this is the important part – allows new people to post new comments.

This is an opportunity. A big one.

If this community opposes Citadel’s business practices and believes in giving greater power to retail investors to detect and fuck up the very shady shorting practices that hurt and control GameStop… we need to be serious about commenting on these rules. No holding back, no being lazy this time. Get the fuck in here. Spread the word. Get others to comment. This is not a drill. If you believe abusive short selling is bullshit and needs to stop, you need to take 5 minutes to fight the good fight. If you think you can’t… what the fuck are we even doing here?!

It doesn’t get more obvious than this. Citadel publicly and vehemently came out against telling anyone about which securities it is lending and when. They have been able to crime in the dark for too long and this is a chance for us to force them into the light. The DTCC wrote a letter lobbying for its exemption from these rules so it can dodge the bullet.

Do not waste this.

If you wrote a comment in the past, check to make sure it’s still there!

Commenting on Reporting of Securities Loans

Here is a template to use. You go into this google doc, use the pieces I provide in the next section to write a comment, save as PDF, and submit that PDF to the portal. 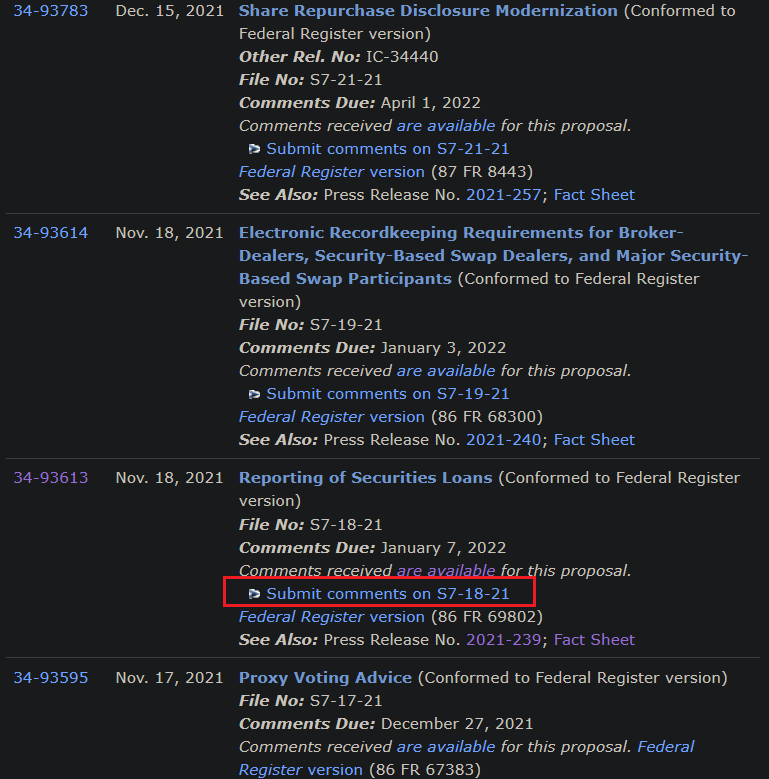 The primary fight with this rule seems to be: if hedge funds have to report their short selling activity, other people could figure out what they are doing and hurt their profiteering. Funds are also concerned about having to spend money to collect and report the data on their lending activity. In short (lol):

I’ve included a number of pieces below that you might take and assemble into a good comment. If you have a bit of time right now, do it right now.

– Explicitly support transaction-by-transaction reporting because it eliminates the ability to “hide within the aggregate”; transparency means transparency and aggregates are not transparent. Secret short selling could dissuade actual investment as funds attempt to glean profit off the backs of true investors.

– Explicit support the 15-minute reporting requirement, saying the cost and effort are justified to prevent fraud and prevent hiding in loopholes.

– Talk about working families and everyday people that are victimized by financial predators. The SEC’s new strategic plan puts “working families” front and center. This is good, and comes from the top, so let’s hold them to it.

– Explicitly say that victimized companies need a greater ability to defend themselves against predators, and that “short selling in the dark” harms true competition and price discovery. The idea that a small number of short-selling funds “know best” and can hammer unsuspecting companies in the dark is shameful. Secret short selling hurts individual investors in the name of greater profits for hedge funds. Is that what the public would want from its government? Timely detection of fraudulent and abusive activity comes before Wall Street profiteering.

– A short seller is not an investor, but the opposite. The SEC seems to be prioritizing hedge fund comfort and profiteering over investor protection and market transparency. While short sellers might be afraid of ‘short squeezes’ that can follow the identification of their short selling strategy, that is not a reason for the Commission to decide against greater transparency. If short selling is chilled, then short squeezes and dangerous volatility become less common. ‘Sophisticated investors’ will quickly learn to avoid positions that could result in such dangerous volatility, which will clearly benefit the market overall.

– Talk about how retail will benefit from increased transparency. We have a much better idea of the risks of our decisions and transactions if we can see who is targeted which companies. If funds are allowed to short in the dark, retail investors remain dangerously unaware of the risks they take on when purchasing securities. More timely reporting allows for more timely reactions; slower reporting prevents retail investors and working families from protecting themselves from abusive and predatory short selling practices. Working families and the individual investors need to be able to look both ways before they cross Wall Street. No one wants working families to get run over in the name of “superior returns for hedge funds.

– Talk about the new and very desirable phenomenon of the public serving as first-line watchdogs in monitoring short selling data for securities fraud, strengthening the SEC and better enabling it to fulfill its mandate, at no cost. More timely, higher-resolution reporting would create a waterfall effect whereby some individual investors analyze the data and make that analysis publicly available for free, which is then disseminated widely and re-analyzed, spurring more activity. This allows individual investors to help each other, and allows busy working families to be the recipient of aid for free. Working families do not have the resources to buy data and analysis, nor do they have the time to analyze data themselves. Greater transparency has positive effects on investor protection that go far beyond the obvious. The Commission must not remain ignorant of how social media facilitates a protective web of information sharing that protects investors. The Commission must not behave as though they are ignorant of how greater data provision empowers whistleblowers, who extend the Commission’s reach and greater empower it to meet its strategic goals.

– Talk about the dangers inherent in long, untracked lending chains,that can lead to economic fragility. Securities lending activity can hide massively destructive chains of obligation that can even be a threat to national security, and so transparency in this area is more important than it has ever been. The risks associated with reckless securities lending and short selling – highlighted with terrifying clarity following the events of Jan 28 2021, go far beyond any theoretical benefits of secret short selling for “superior returns”. Investor protection comes first.

Using the SEC’s Own Words

It is often useful to use the SEC’s own words and arguments to support your own. If they have stated something in the past they generally need to support it in future. You can look at rule 10c-1 or rule 13f-2for things to use. Here’s an example: You might say,

“the Commission, in proposed rule 13f-2, explicitly noted its awareness of the myriad ways in which short selling can be used to abuse individual investors and working families. In proposed rule 13f-2, the Commission said it is “…mindful of concerns that certain short selling activity can be carried out pursuant to potentially abusive or manipulative schemes. For instance, market manipulators may seek to spread false information about an issuer whose stock they sold short in order to profit from a resulting decline in the stock’s price. The Commission has previously noted various other forms of manipulation that can be advanced by short sellers to illegally manipulate stock prices, such as ‘bear raids.’”

When short selling practices occur in the dark and ‘current’ short sale information is provided long after a position has been entered into, retail investors and the like cannot be aware of the risks that they take on when buying securities. You can understand why this lack of information would represent a problem for all investors, who are expected to invest on incomplete and dated short sale information. I support the intraday 15 minute reporting requirement. The cost and effort involved with this is justified to help in early identification of abusive shorting practices, to reduce the ability of toxic market participants to hide behind loopholes and to attempt to prevent such fraud occuring in the capital markets.

The new rule would also provide any victimised companies a greater ability to defend themselves against predatory short selling, as short selling in the dark harms true competition and price discovery. The enactment of this rule would also introduce the ability for the general public as well as public companies to serve as watchdogs for the SEC as an initial line of defense against abusive practices, by being able to more granularly monitor short selling for securities fraud for those securities they are invested in, helping and strengthening the SEC’s ability to fulfil it’s mandate and to help weed out market participants that are working against SEC rules, all at no additional cost to the SEC.

I am a strong supporter of transaction by transaction reporting. It is clear that aggregated reporting is not transparent and provides far too much rope where fraud can be hidden in aggregates. Why should one individual or entity have to suffer a worse execution whilst another individual or entity benefits from a better execution, just because it is more convenient for certain institutions to report their short selling practices in the aggregate? It is wholly unfair and contrary to the requirement of best execution and so it should be a mandated requirement for transaction by transaction reporting.