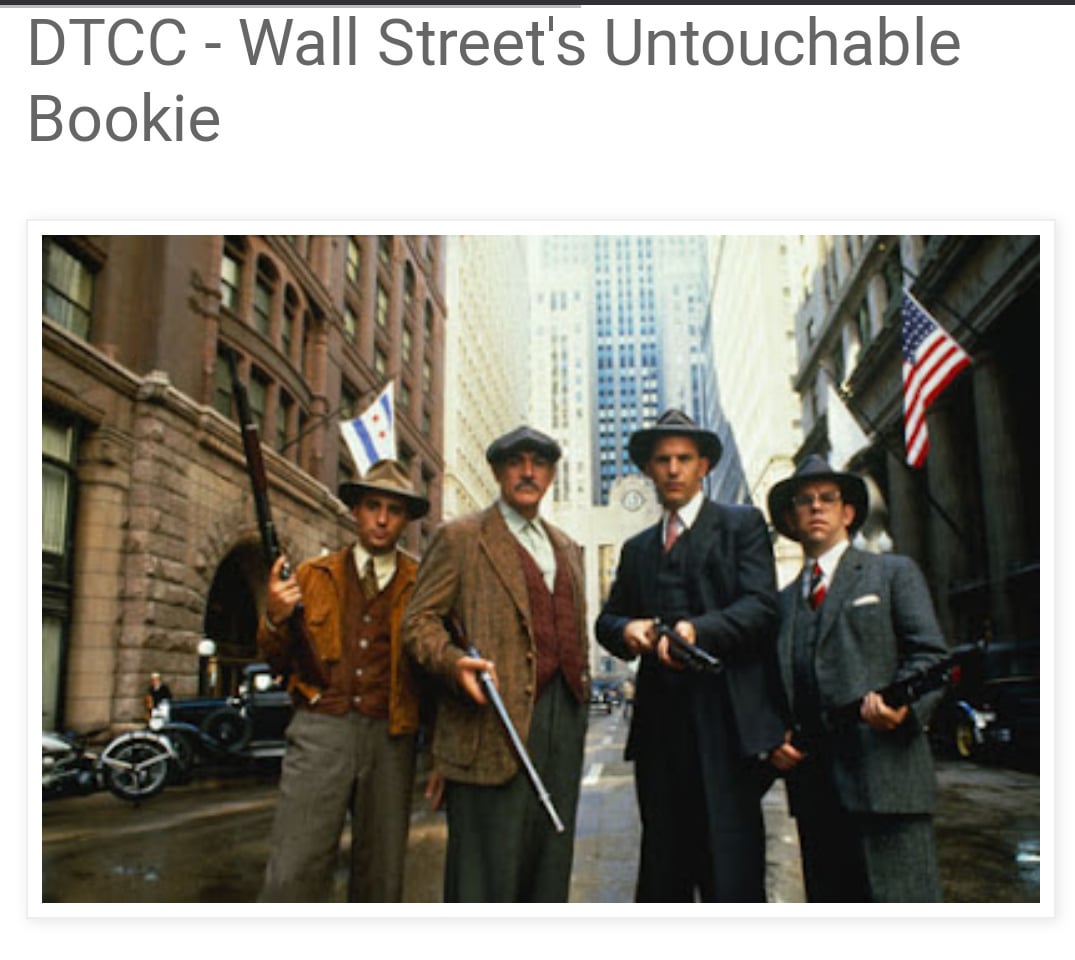 “I believe that banking institutions are more dangerous to our liberties than standing armies. If the American people ever allow private banks to control the issue of their currency, first by inflation, then by deflation, the banks and corporations that will grow up around the banks will deprive the people of all property until their children wake-up homeless on the continent their fathers conquered. The issuing power should be taken from the banks and restored to the people, to whom it properly belongs.”

Threatened to cancel program participation for a TRANSFER AGENT..DTCC has monopolized the system to only fail at the one job of a clearing agency to make sure purchases clear and real shares are delivered. They then turn around casting judgement and telling who can and can not be part of the system …not for the good of investors but to keep anyone from finding out that they are nothing but a crime syndicate that threatens, bullies, lies , commits securities fraud both domestic and international. 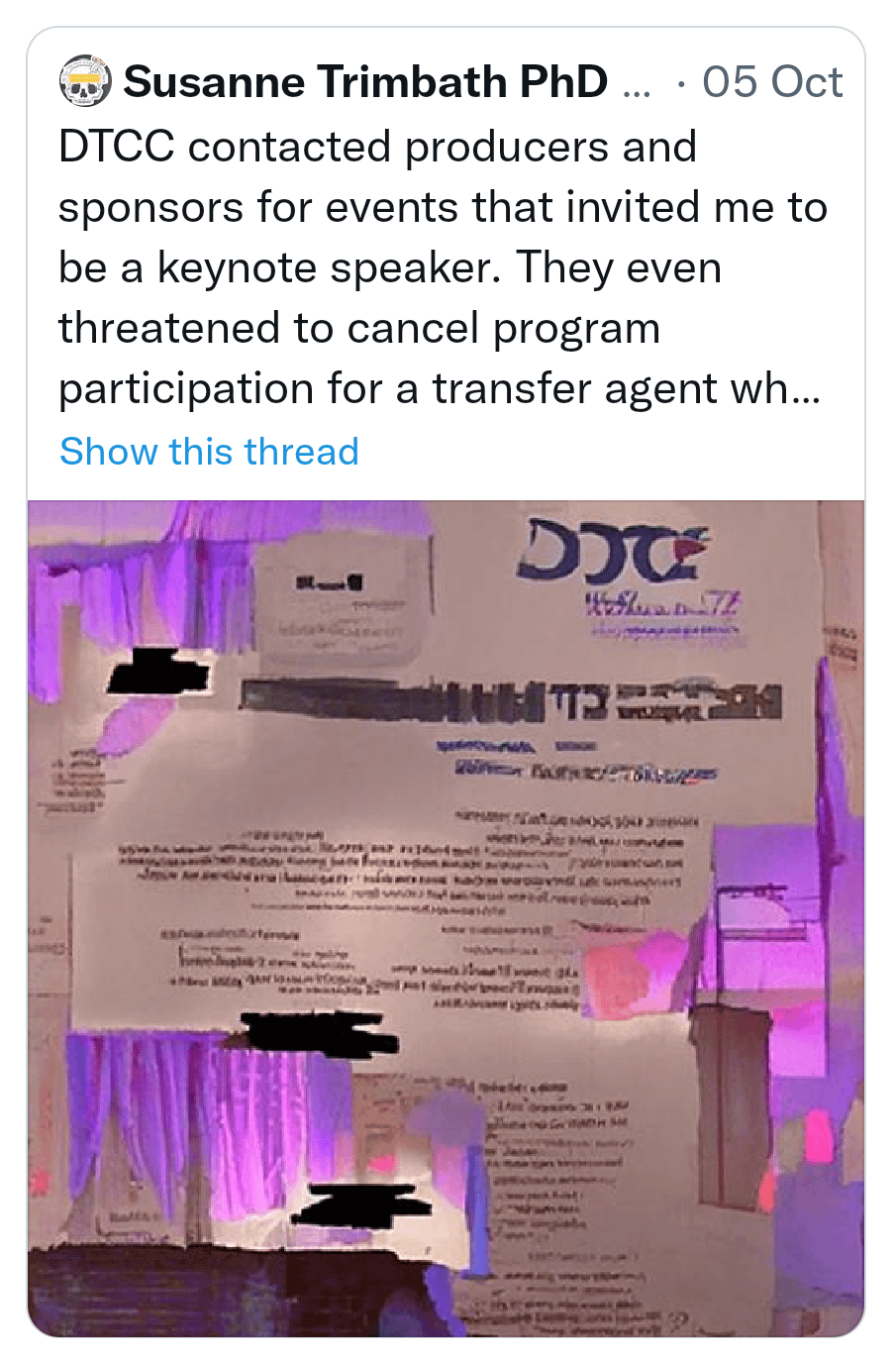 Letter from a transfer agent:

“Many Issuers have come forward with their opinions and interest in joining the exodus from DTCC. Almost daily, particularly when an Issuer is attempting to have their shareholders pull their shares from street name and obtain certificates, Transfer Online receives phone calls from shareholders who tell us that their broker told them they cannot have a stock certificate, or that the transfer agent will charge you $75 – $100 dollars for a certificate, or the transfer agent won’t issue the shares. How can a shareholder get a stock certificate if their broker (or the participant) is the obstacle?” Sound familiar?

Again this has been it all along, they desperately need to keep your shares.I am writing these comments to the Depository Trust Company’s (“DTC’Cs”) proposed rule change that appeared in the February 21st issue of the Federal Register. My comments represent several viewpoints but primarily I respond in the following capacities:

I am the President of Transfer Online, Inc, and act as the transfer agent for (Nutek, Inc.) one of the Issuers who expressed their desire to withdraw from the DTC system but were denied. Transfer Online also serves as the transfer agent to several other companies who have inquired about the possibility of withdrawing from the DTCCsystem and finally, I am an experienced member of the financial services industry for the past 20 years where I have specialized in transfer agent and back office services.As a transfer agent involved in this process I have direct experience of the situation(s) leading to DTCC’ s request. While acting on the behalf of Nutek, Inc. to notify DTCC of their intent to withdraw, Transfer Online was initially told that the request was received and in process. No indication was given that this request to withdraw was a problem until approximately 6 weeks later when we were made aware that DTC’s position had changed. Transfer Online was told that if Nutek, Inc. shares were not transferred into their nominee name, Cede & Co”, Transfer Online would be in violation of the operational agreement between our two companies and that we would be held accountable. This put Transfer Online between the Issuer’s request (on whose behalf we act) and DTCC’s demand and so we inquired to the S.E.C as to what, or if, any legal or statutory obligations existed to either party which superceded our agreement to act as agent for the Issuer. The S.E.C was unable to issue guidance in this matter so having no idea what “being held accountable” would mean to Transfer Online, and having received several phone calls from DTC requesting to know my position and what my intentions were, I suggested to the Issuer that until such time they were prepared to handle any potential legal issues with an entity as large as The Depository Trust Company that they let the shares be processed as usual. Many Issuers have come forward with their opinions and interest in joining the exodus from DTCC. They are frustrated by dramatic unexplained price movements, confounded when in a single day, in companies with a high percentage of shares held by insiders, more than the number of shares outstanding for their company are traded, and they are frustrated by their inability to access the information they need to determine the cause. The company is essentially cutoff from the majority of stock transactions that take place behind the closed doors of DTCC in book entry movements of shares. Should the Issuer request information it is only available to them at the prices that are determined by DTCC. Transfer agents, while able to provide transaction history which happens when stock certificates are involved, cannot provide the information from DTCC because we do not have access to the majority of the shareholder records as they sit on our books as one large position in the name of Cede & Co. that seldom changes. This leaves an Issuer powerless to research the trading of their own stock, communicate with the shareholders or take action against those who might be harming their company with questionable even perhaps illegal trading practices.in regard to DTC’s proposed rule change that states, “DTC will only honor the requests of the participants”, I feel compelled to point out that the participants of DTC are ultimately only holding shares for the benefit of their customers who are in fact the shareholders of the company.

“Instead of forcing their DTCC participants holding the short positions (failures to deliver) to deliver the missing dividend shares of Coil, the DTCC management told Grifco to contact the shareholders that didnt receive their dividends to sign a waiver waiving their right to these dividends. “

Grifcos 40 million shares are partially held in street name at the DTCC and partially in registered format wherein the shareholders hold their own certificates, perhaps in a safety deposit box. 4)

They learned of this disparity during the dividend process.

Due to the enormous amount of deliver failures held at the DTCC (28 million shares plus the amount held in certificated form by registered shareholders) there obviously werent enough dividend shares of Coil to go around if all shareholders of Grifco were to receive 1.89 shares of Coil per Grifco share owned.

The securities laws clearly state that any short seller that is short any shares of an issuer on a dividend record date must match that dividend.

Instead of forcing their DTCC participants holding the short positions (failures to deliver) to deliver the missing dividend shares of Coil, the DTCC management told Grifco to contact the shareholders that didnt receive their dividends to sign a waiver waiving their right to these dividends. Obviously very few would comply as they had legally earned these dividends.

DTCC then demanded that Coil Tubing, whose shares were being dividended out by Grifco but that otherwise had nothing to do with the dividend distribution process, to go out and buy additional free trading shares in the market or supply the missing amount out of their treasury despite the fact that it was clearly the responsibility of those short the stock of Grifco on the dividend record date to match the missing dividend shares. 9) Grifco obviously refused this DTCC order as it would have been very damaging to their shareholders because of the dilution, as well as very expensive.

DTCC management then issued a statement on 7/10/08 that unless it received the necessary shares within 21 days that they were going to proactively reduce the size of the dividend distribution from 1.89 shares of Coil per Grifco share owned to 1.29 shares per Grifco share owned. They did this despite the fact that it was clearly the responsibility of those DTCC participants that were short the stock to match the dividend.

Coil Tubing refused to play ball with this DTCC mandate and filed suit against the DTC and Grifco itself claiming that Grifco should have been aware of this massive discrepancy. In reality Grifco management has no idea of the levels of delivery failures in their shares held at the DTCC or outside of the DTCC in an ex-clearing format. The judge issued a temporary restraining order forbidding the DTCC from adjusting the Grifco shareholders accounts from 1.89 dividend shares per Grifco share owned to 1.29 shares of Coil per Grifco share owned.

During a recent Open Public Forum on the impacts of naked short selling, an issue came forward regarding proxy voting. In the Forum Dr. Susanne Trimbath, a 10-year employee of the DTC Stock Lending and Clearing Operations identified a study of the proxy voting process conducted by a single transfer agent on 341 securities they were responsible for. The study revealed that in each of 341 securities reviewed each one had a reported over-voting of proxies due to a system breakdown in the proxy process. The report was later published in a Securities Transfer Association Newsletter.

To further expose this issue of non-compliance Anand Ramtahal, Vice President, Market Member of Firm Regulation for the NYSE identified a similar study conducted by the Exchange on several of its members and found the same results as the Transfer Agent Study. The conclusion being that members were not following the rules and regulations pertaining to voting to beneficial owners only but instead allowed all book-entry non-controlled shares to also be voted.

In an October 2008 meeting between BCIT and the DTCC, the DTCC finally gave BCIT an ultimatum after years of giving BCIT management false promises about lifting the Global Trading Freeze.
BCIT management was told if they ever wanted the Global Trading Freeze lifted they first had to issue enough new shares to cover all the existing Naked Shorted shares the brokers created out of thin air. Issuing new company shares would essentially allow the brokers to cover up all of BCIT shares they counterfeited. This would also allow the brokers to keep all of the money they stolen from the BCIT shareholders without penalty. Furthermore, all the extra shares would severely dilute the share structure and cause even further damage to the stock price. This is nothing more then BLACKMAIL by the DTCC. There are no other words to describe it.