Today, I do not bring you shitposts, tinfoil, or memes. 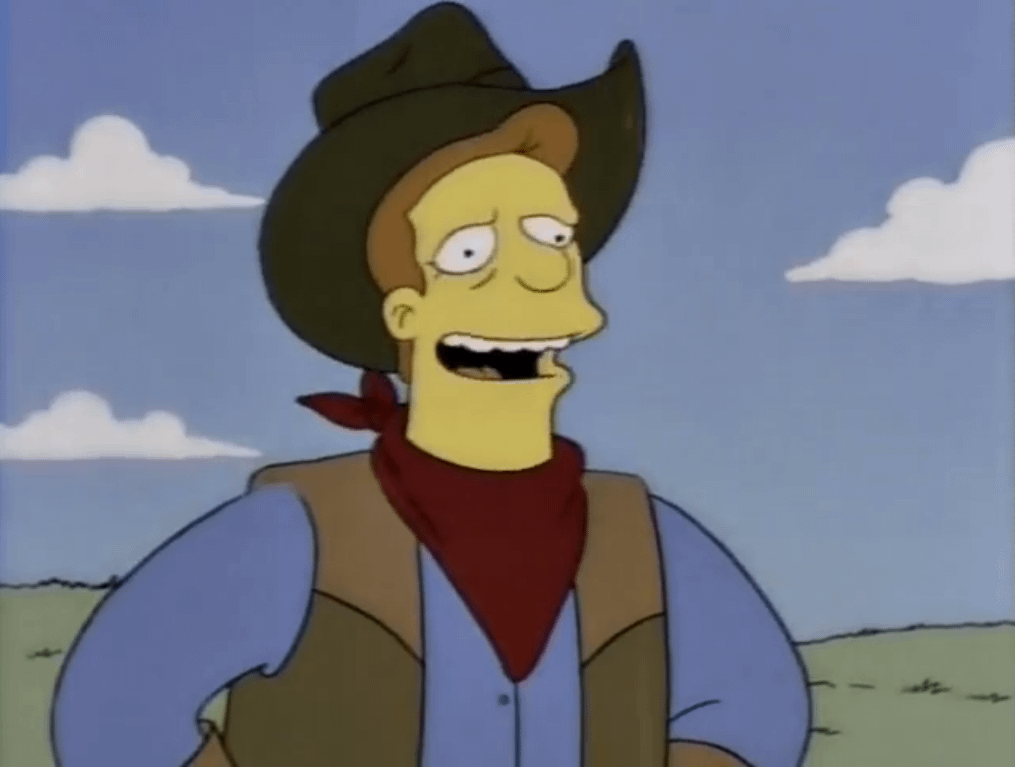 This is my Sheriff outfit.

Today I show you the DD on how Melvin Capitol concealed crucially important positions from 13F reporting, deceived Congress through his testimony, then made a killing on those shorts with a perfectly timed Archegos meltdown.

First, we’re working from this page, the Fintel 13F history for Melvin Capital: 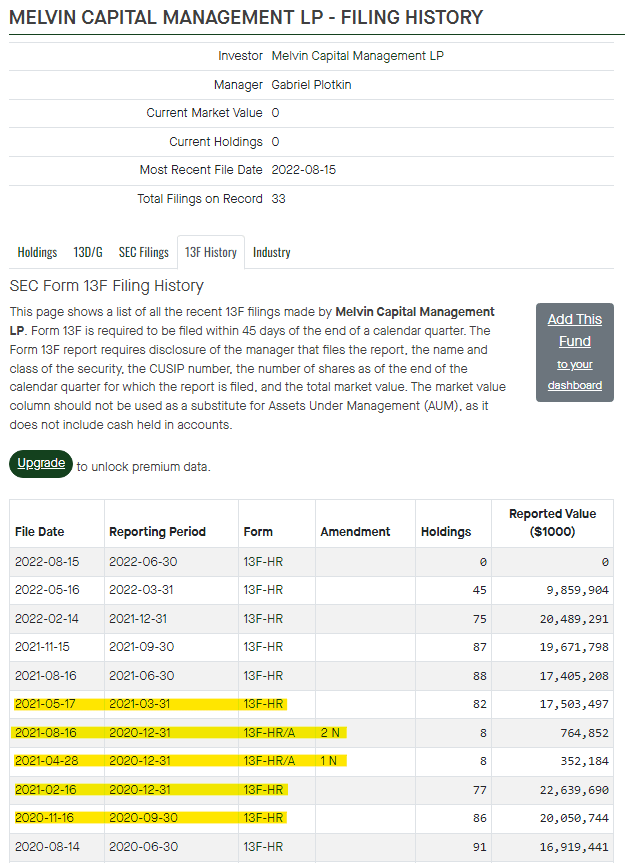 The first thing that should stand out immediately is that the report for 2020-12-31 reporting period has TWO amendments, with filing dates 2 MONTHS and 6 MONTHS after their initial due date. By itself, this clearly suggests that Melvin is either too incompetent to keep track of the positions in their portfolio, or that they are a bad actor willing to conceal positions from their reporting. However, the real dirt is when we go deeper and consider the timeline. 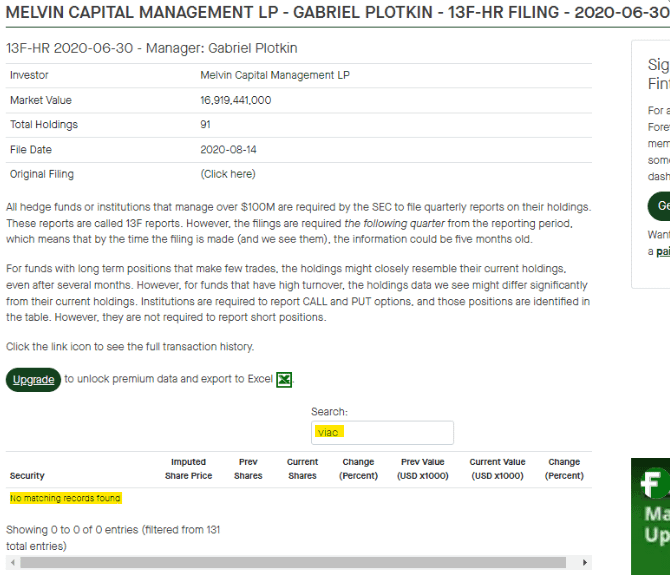 VIAC price is $27.46 at this time. Historical pricing chart for VIAC at Fintel.

Now we’ll move 3 months ahead to the 2020-09-30 Filing – Melvin has added a nearly $18M short position in VIAC for 640,000 shares with a price average of $28.01 listed. 4 months from these positions, and just 2 months from when this report was filed, GameStop will sneeze. VIAC price at this time is $31.90, which means that Melvin is already underwater on the short. 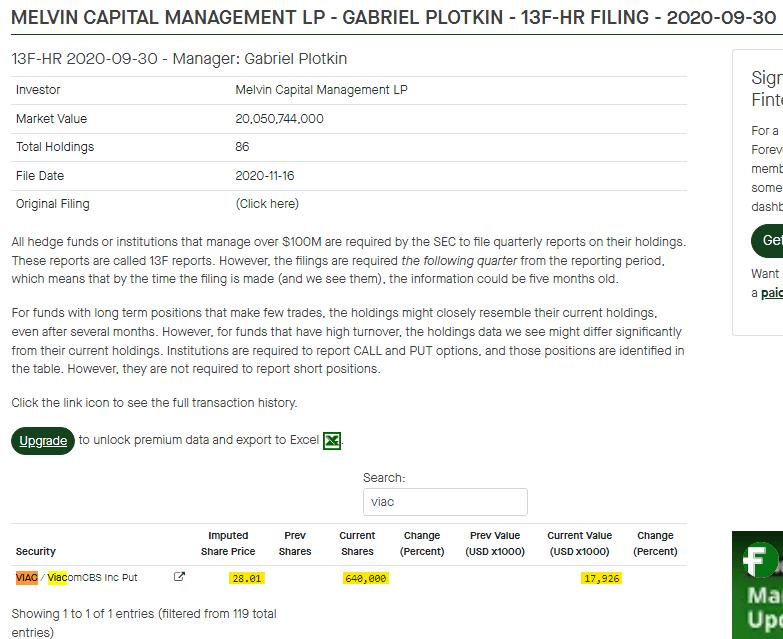 Before we get Melvin’s next 13F, let’s set the stage. The GameStop Sneeze occurs around Jan 25th 2021. The world is rocked by the implications of naked short selling. Melvin Capital is scrambling to survive, and telling everyone that they closed their shorts. Just two weeks after this explosion, Melvin has to file their end of year 13F and reveal the positions they held 2020-12-31. Everyone is watching this filing like hawks, and Melvin knows that people will be looking for other places that Gabriel Plotkin and the fund are still exposed.

The 2020-12-31 filing drops on February 16th 2021, and the world rushes in to see the GameStop position for themselves. What isn’t listed there, however, is the aforementioned VIAC put. Clearly this suggests that Melvin closed this short position sometime between 9/30/2020 and 12/31/2020, considering it was on the previous 13F, but not this one. Melvin knew he couldn’t conceal the GME position, there were too many eyes looking for it exactly. Instead, he chooses to hide things that we aren’t focused on. 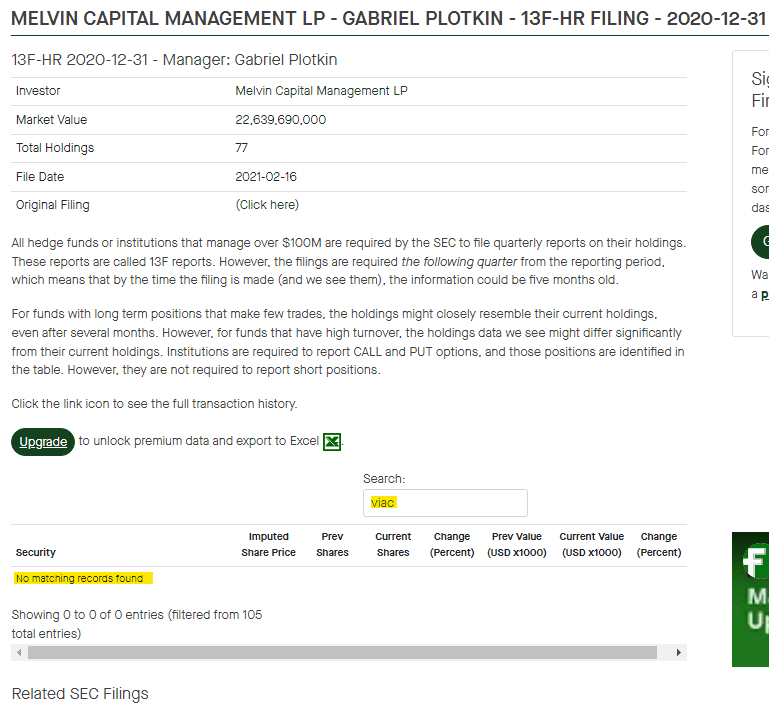 Good thing Melvin closed that Put, because at the time of this filing (2/16/2021), VIAC has climbed to $59.14! Melvin’s put position, with average share price at $28.01, would have been crushing. On top of the GME situation, it certainly would have weighed heavily on their ability to meet collateral requirements. Oh, not to mention that this is just 2 days before their Congressional Testimony on 2/18/2021. 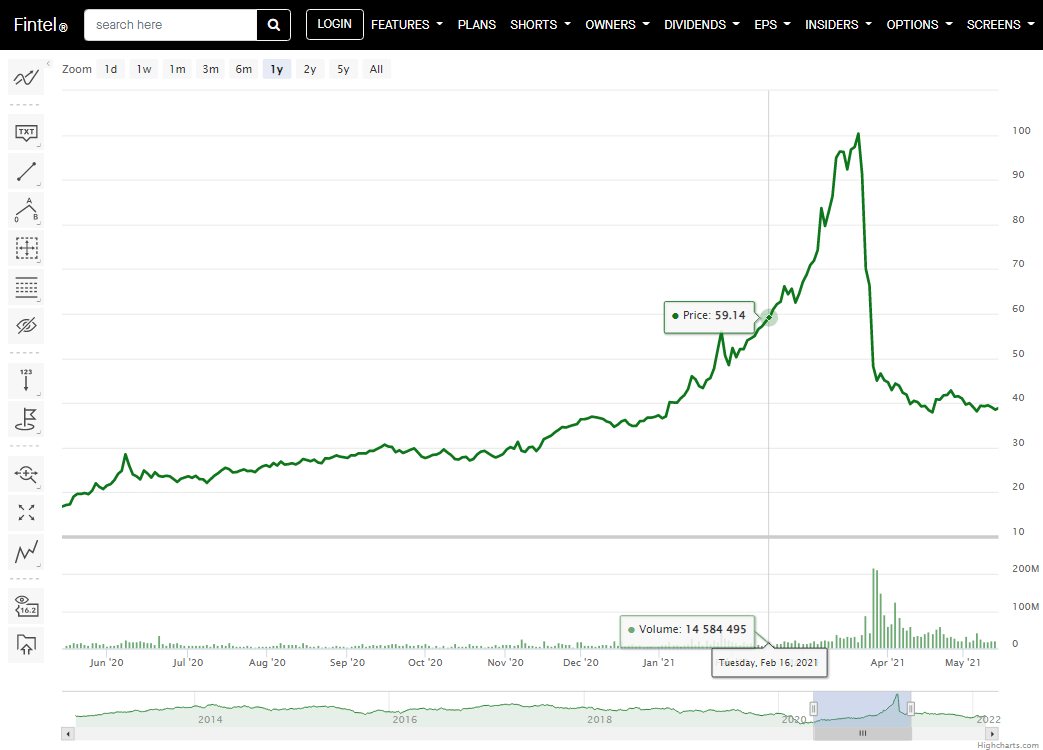 In a free and fair market, this would be the end of our story. In this world, however, money buys justice. 2 MONTHS after this 13F was filed (and 4 MONTHS after the original reporting period) Melvin is somehow allowed to file a 2021-12-31 amendment on 4/28. 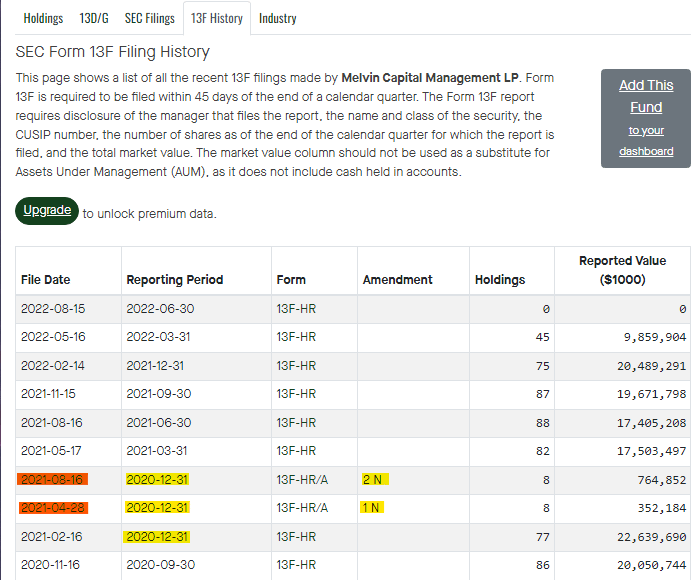 And what do you know? THE VIAC PUT WAS NOT CLOSED! NOT EVEN CLOSE! PLOTKIN INCREASED HIS PUT AGAINST VIACOM BY 409%. He’s now short on 3.26 million shares. Considering the average share price has risen to $37.26, Melvin has been shorting like crazy all the way up. Sound familiar? It’s also worth noting the other considerable positions listed here that were excluded from their original report. 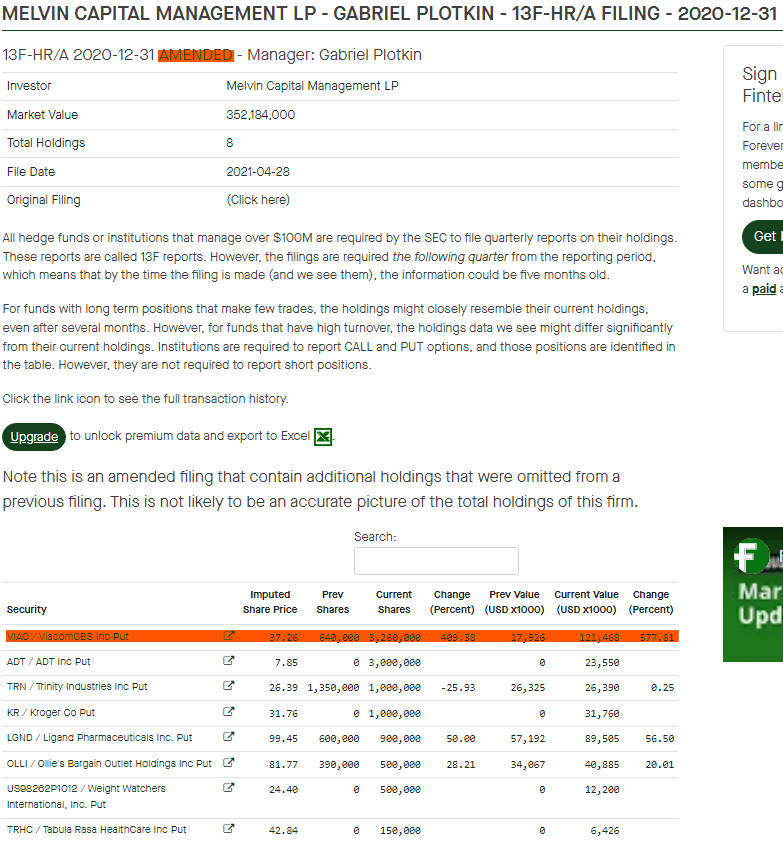 So why would Melvin file this amendment now? Maybe because they’re finally clear of being snapped. In the interim between the filing on 2/16 and this amendment on 4/28, VIAC squeezed from $59.14 to $100.34, then plunged back down to $37.92 before flattening out. 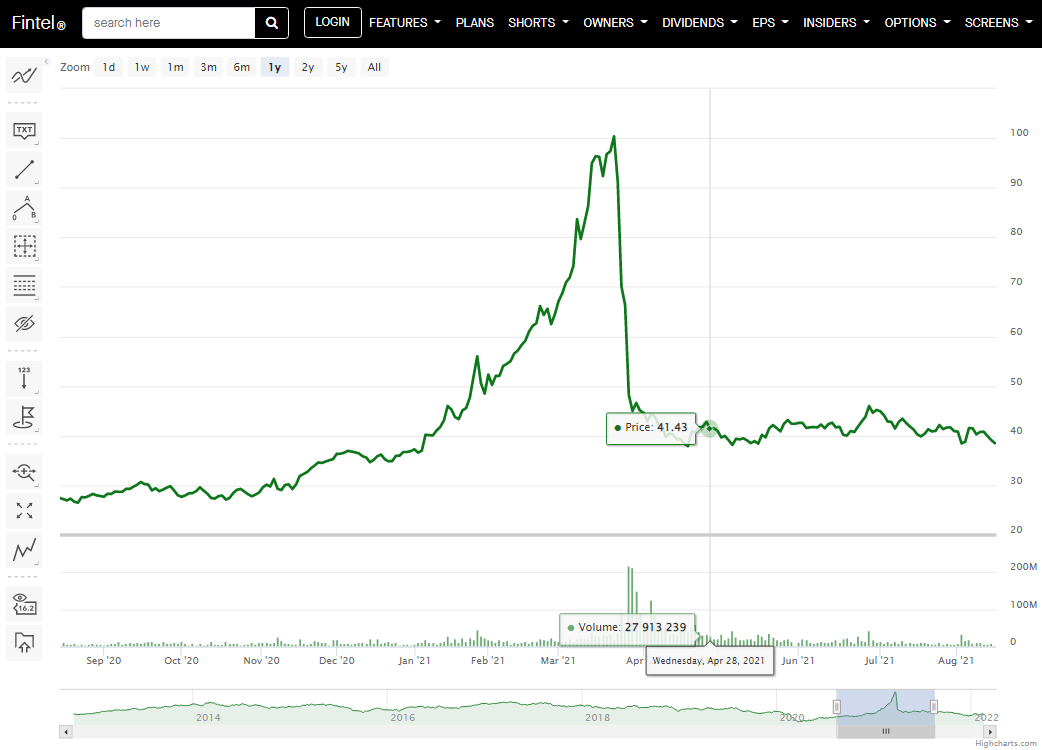 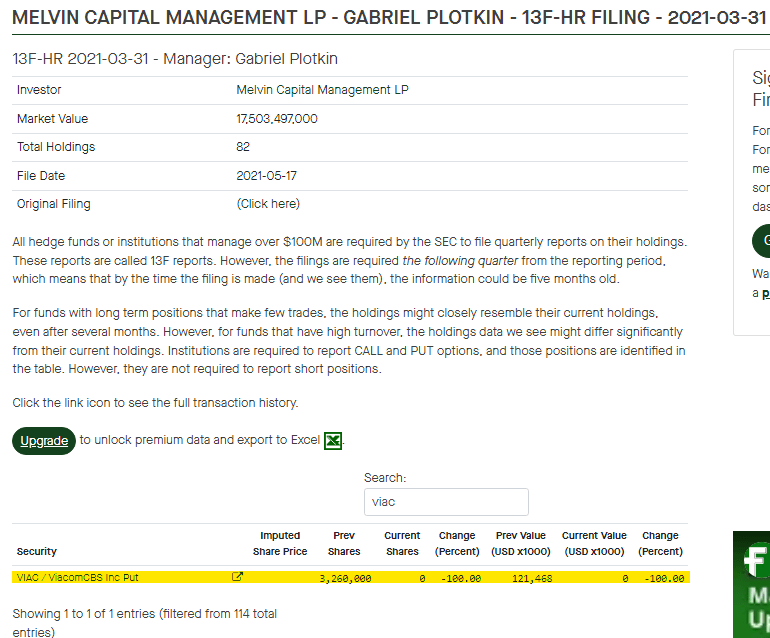 This means that Melvin closed this position on or before 3/31/2021. What an insanely lucky bastard, considering that VIAC crashed with only days to spare for Melvin to close the short position. On 3/22, Melvin would have been on the hook for $100 per share. Thankfully for Gabriel Plotkin and Melvin, another fund that’s long on VIAC gets blown up at the perfect time to save his ass, and provide tons of distraction to take the market’s mind off GameStop. You may have heard of them: ARCHEGOS. Begining March 24th 2021, Wall Street Banks started liquidating Archegos’ extreme long exposure to VIAC. Timeline of the Archegos Meltdown here. 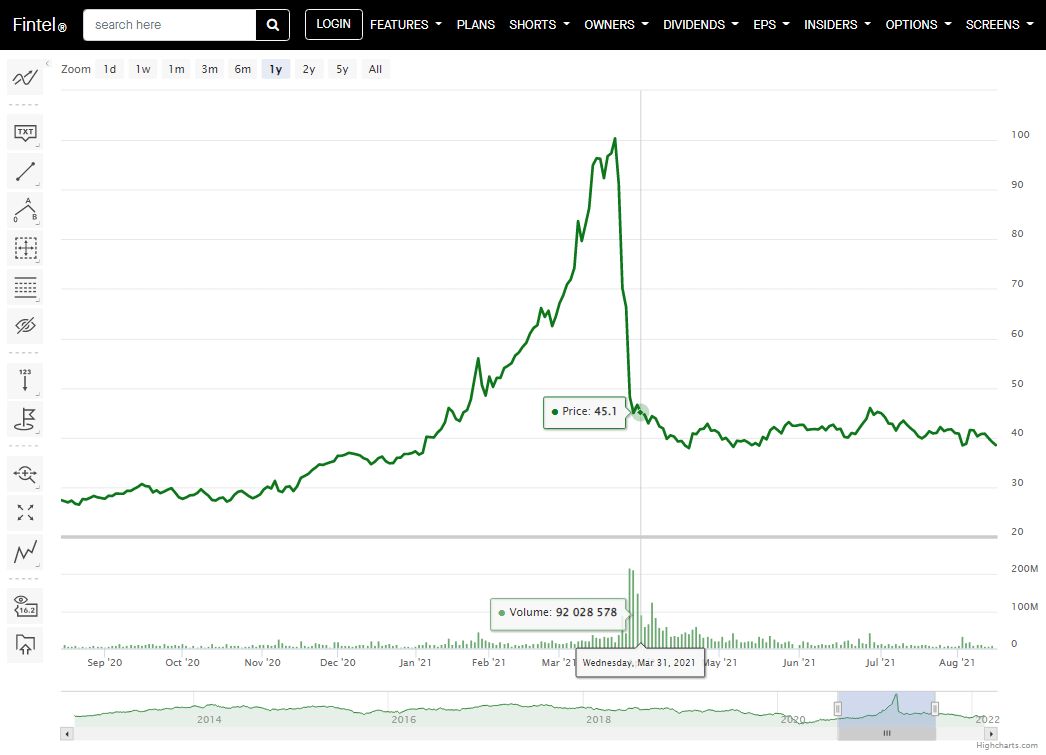 Now, keep in mind that these 13F only report the positions held on the date of the reporting period, as well as updating any positions listed on previous filings. This means that Melvin likely had exposure to far more than the 3.2M VIAC shares revealed by the amended 13F, having continued to short as hard possible after the original 12/31/2020 report in order to fight down the price – just like they did with GameStop.

Join me next time for DD on how Melvin Capital conspired with Goldman Sachs, JP Morgan, and Morgan Stanley to throw Archegos to the wolves, loot the body, and leave Credit Suisse holding the bag. 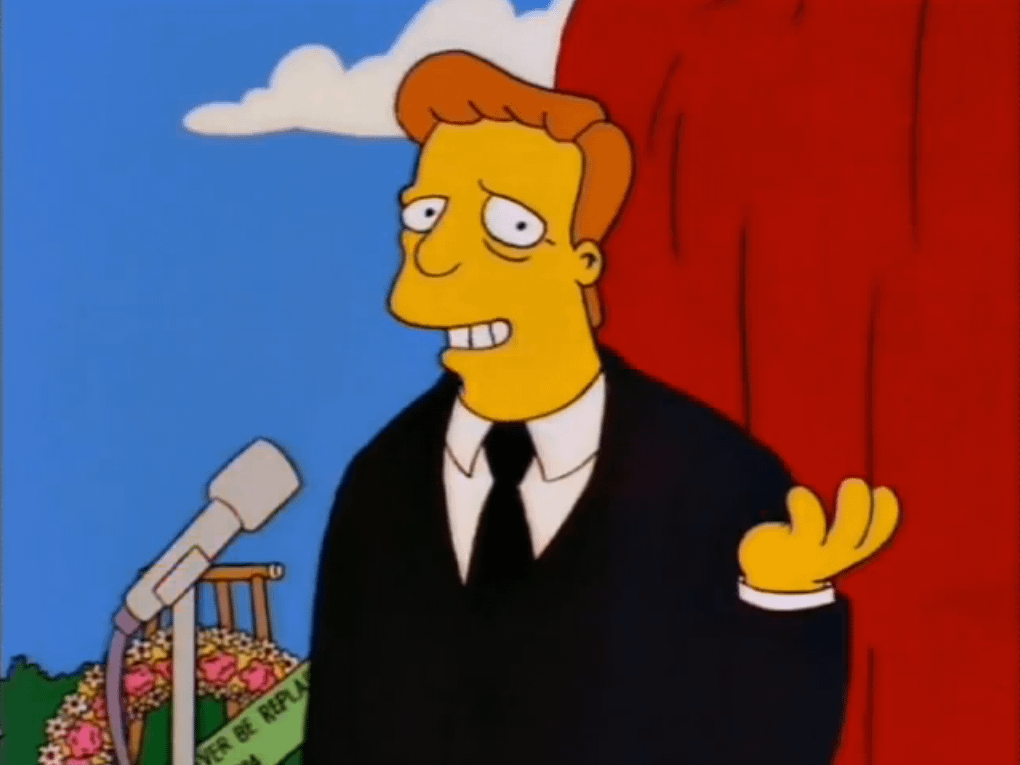