Rapidly deleted orders, or “fleeting orders“, seem to get a lot of negative attention in the media. In conventional markets, some have associated rapidly cancelled orders as a manipulative tactic employed by high frequency traders. My (humble) belief is that probably most (but not all) of the time, high cancellation rates can be attributed to various strategies feeding off one another/re-adjusting positions, as described above. The fact that limit order books are price/time priority based (there are also other schemes), in a way, forces participants to constantly re-position their orders: the market participants are most certainly not collaborating in any way, so most of the time the activity seen in the order book is probably the result of some giant reactive programming exercise. Naive side note: Maybe there exists an alternative (game theoretical) scheme, in which 2 market participants could somehow (at least temporarily) agree to “share” a queue position, instead of jumping in-front of one another.

Having said that, there are indeed various ways that high cancellation rates can be associated with more “predatory” high frequency trading. Given that trading in Bitcoin, on Bitstamp, is completely unregulated, and basically anything goes, I would expect (and hope) to see evidence of manipulative activity. As an initial step, the following 4 visualisations show every single “fleeting” order event over a 4 month period. The intention of the visualisations are not to expose any “suspicious” order cancellation activity, but more to further highlight the predominance of systematic trading on this particular exchange.

Each graph shows the amount of deleted volume (per event) along the horizontal axis, vs time, ascending on the vertical axis. Each point in the graph corresponds to a cancelled order event, where the colour blue differentiates the cancelled Bid events from the cancelled Ask events. I define “flashed volume” as an order that is placed in the order book and later cancelled. As such, these visualisations exclude any partially filled, then cancelled orders. Finally, the horizontal axis is plotted in log-scale, since the distribution of order size decays exponentially: small orders are much more frequent (This is another subject altogether). 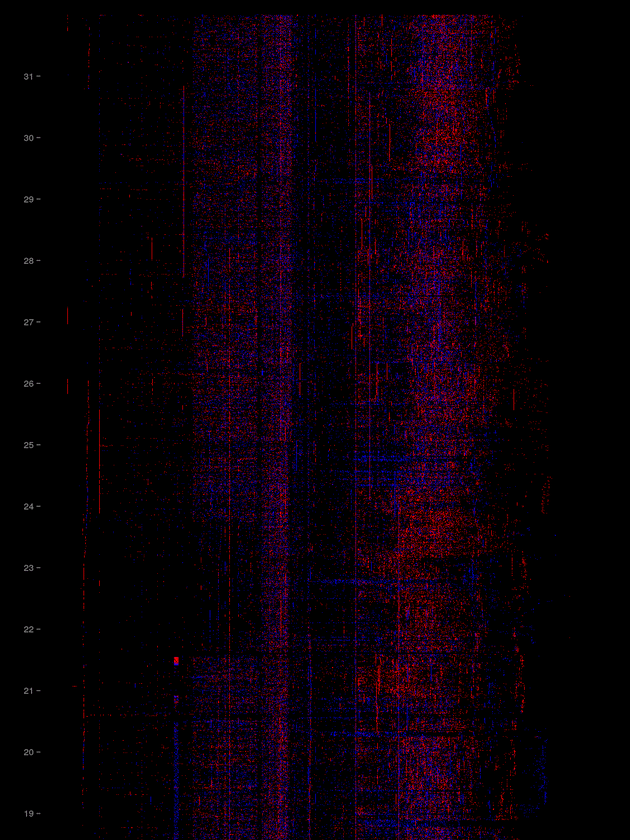 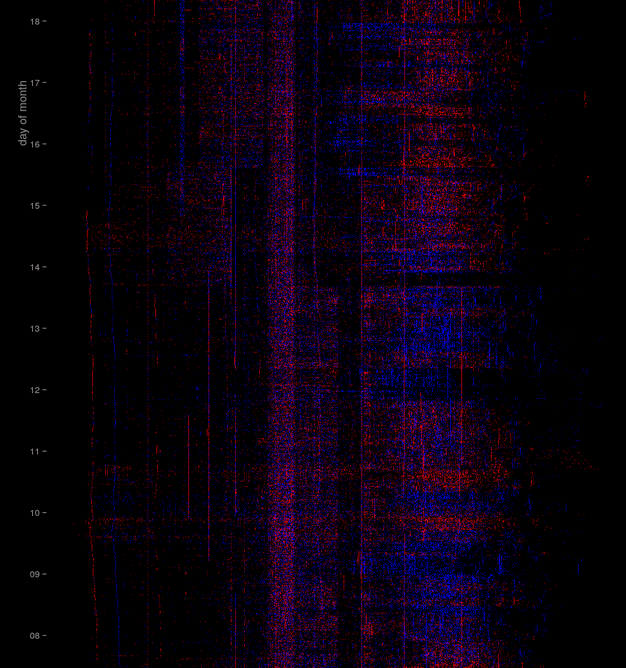 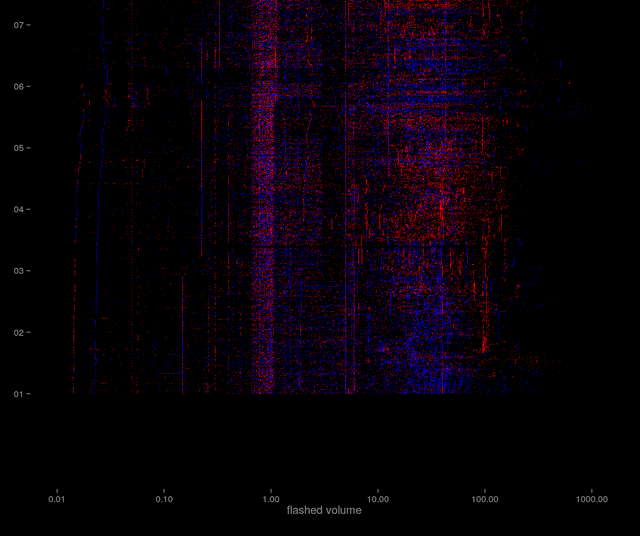 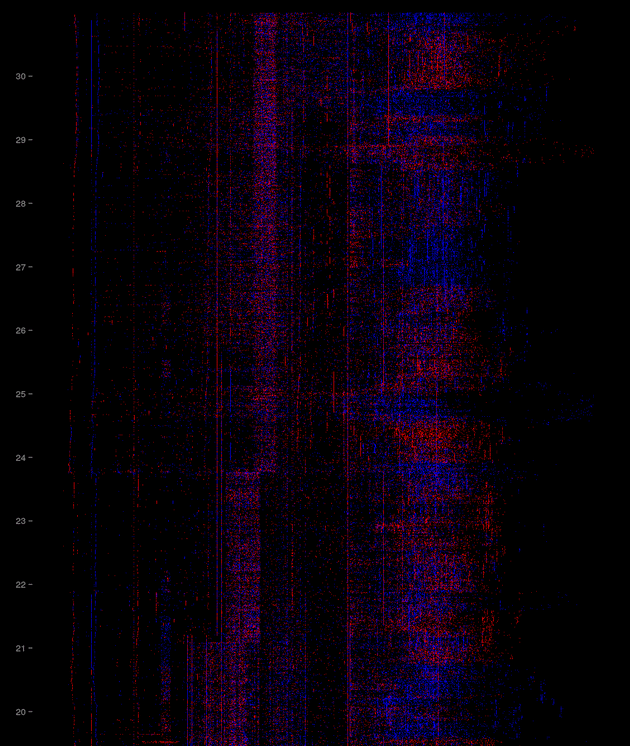 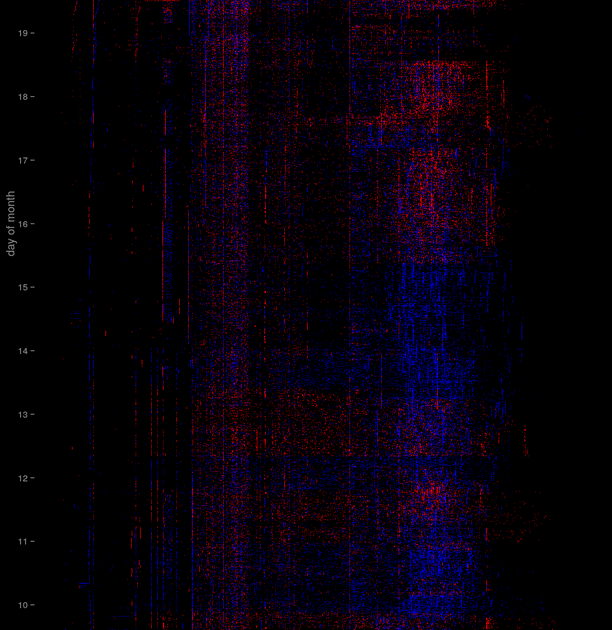 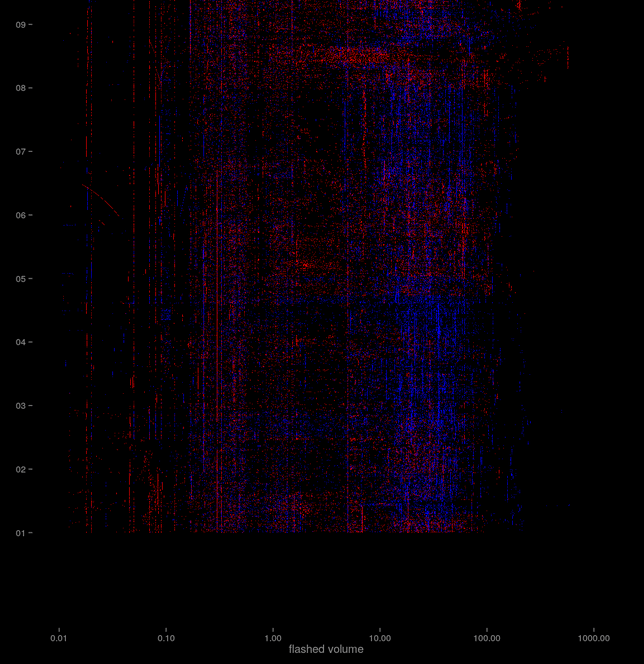 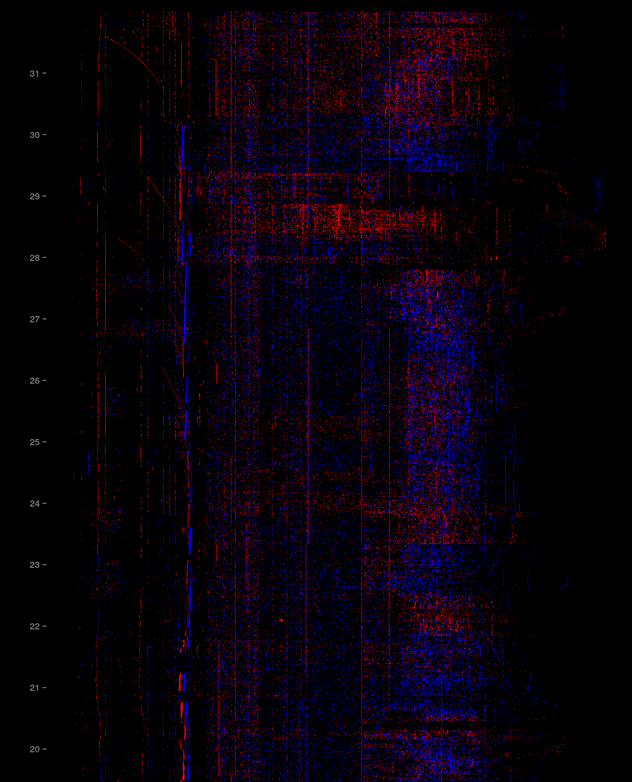 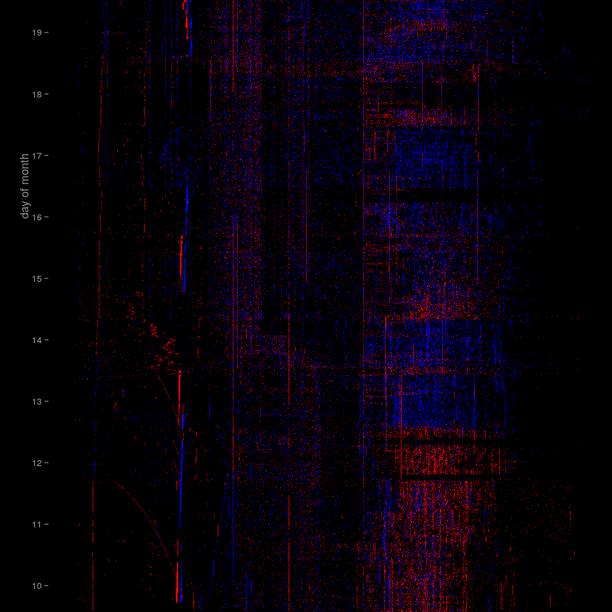 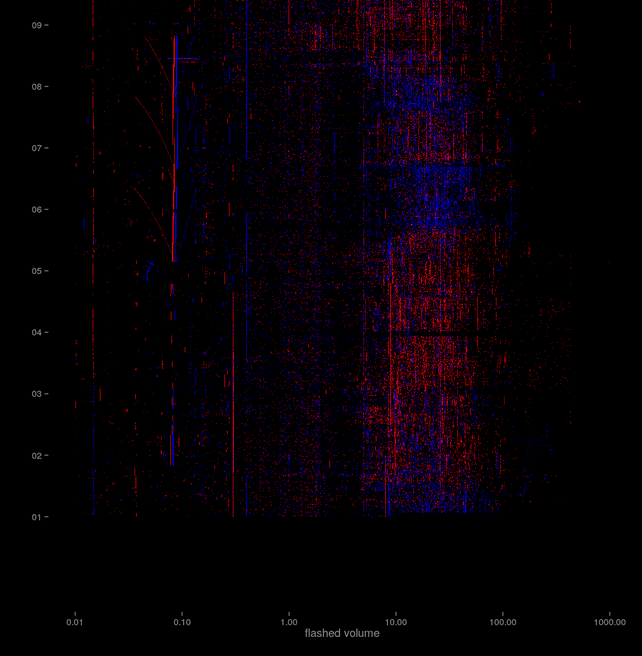 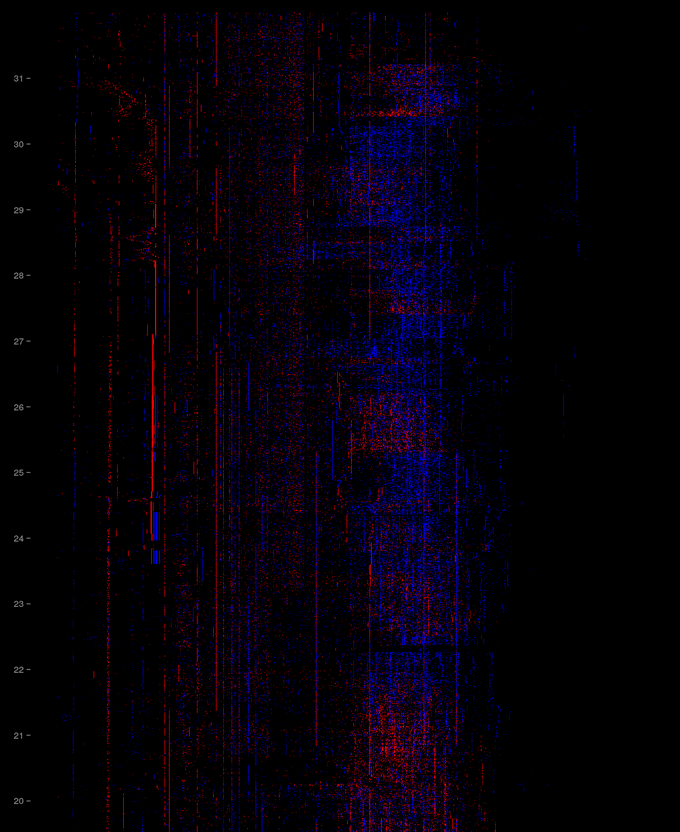 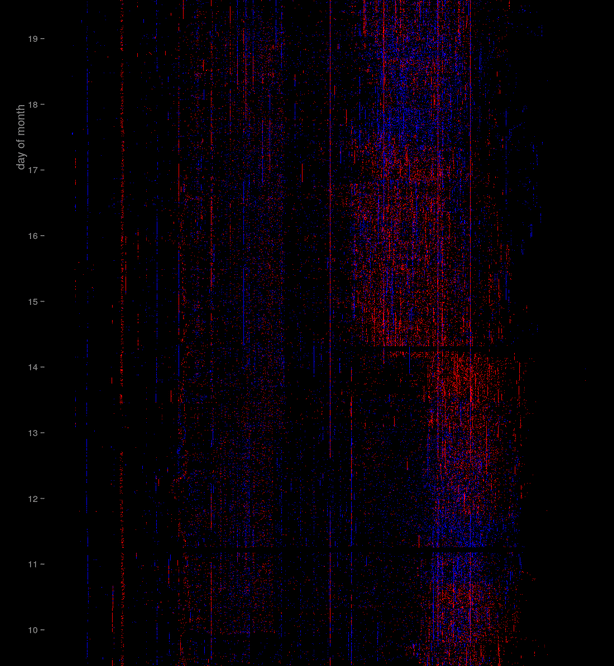 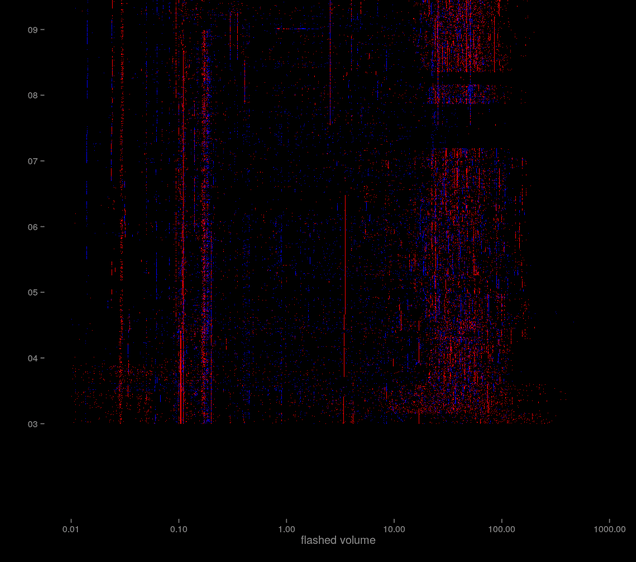 The first observation is again the striking regularity/geometric appearance of the data. Simply plotting the cancellations by volume shows obvious systematic activity (there are other dimensions, this is the most obvious to explore). The second observation, is that the cancellations appear to happen in regimes or clusters, with cancelled bid volume sometimes far greater than cancelled ask volume, and vice-versa. This may lead to the interpretation that orders are being re-allocated either in response to some external news, or to chase the market. 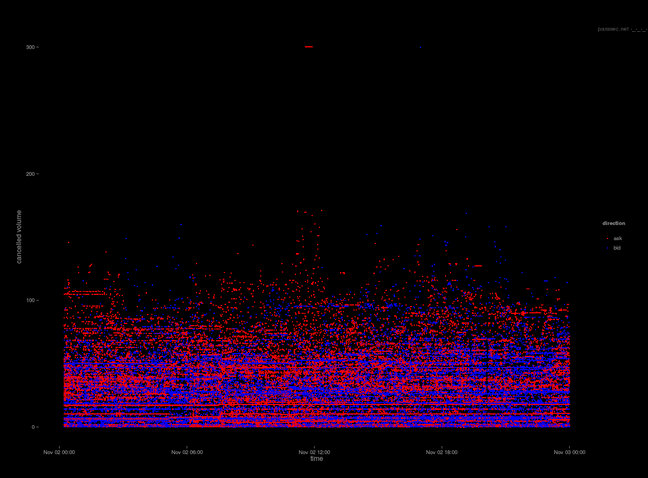 Filtering the graph to include cancelled volume <= 100 shows the density of cancelled volume for this day (260,524 deleted order events). The next few visualisations show the same time period, however with a progressively lower limit on the size of volume displayed. 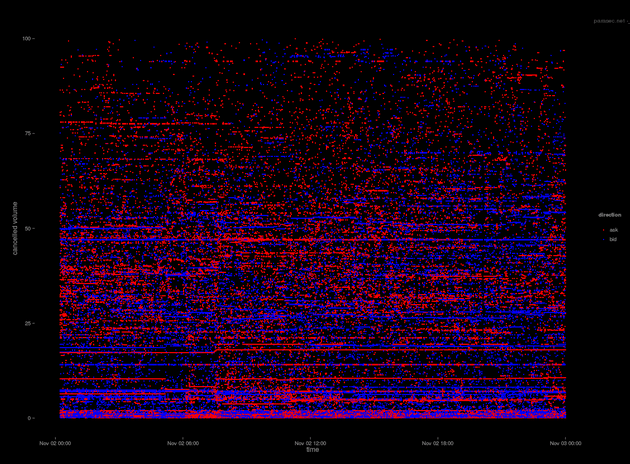 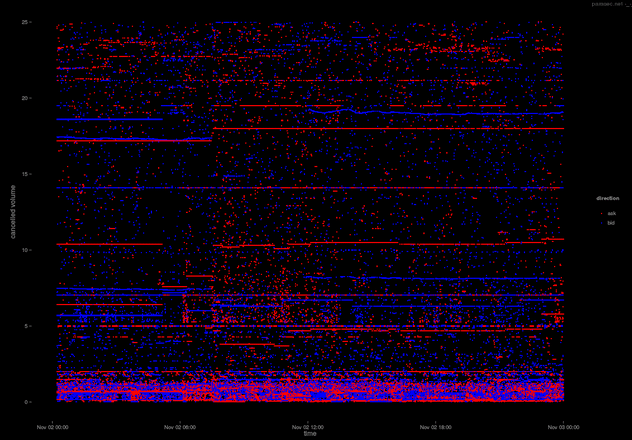 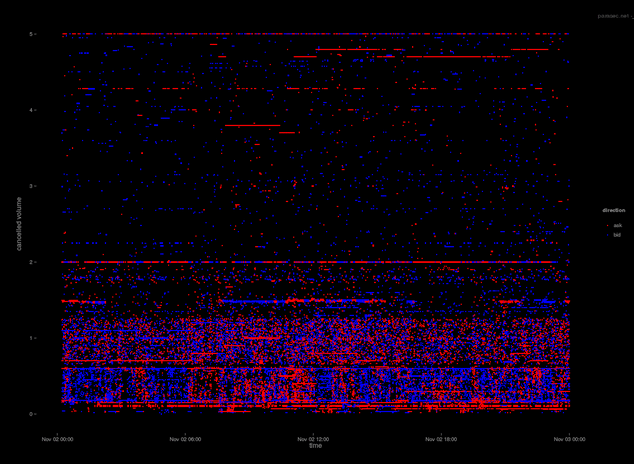 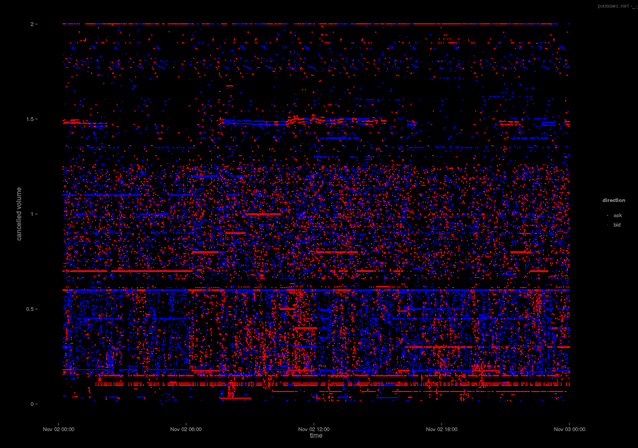 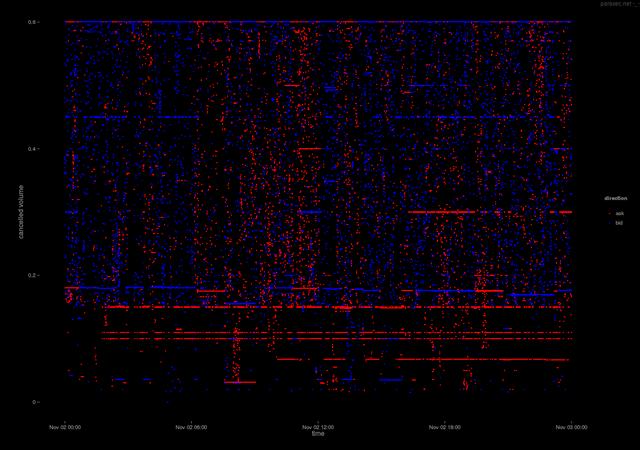