In the next few examples, I will try to interpret a few “suspicious” looking patterns. Generally, it was not very hard to find these examples, although I am disappointed a little in terms of the sophistication of the apparent tactics. I may add more examples at a later date.

Layering is reported in conventional markets as a negative HFT tactic. Related to fleeting orders (inevitable order cancellations), laying involves adding volume at various price levels with the sole intention to influence other market participants into believing (observing) an order book imbalance or strong buying/selling pressure. In other words, laying attempts to coerce the market into a direction that will benefit the initiators position.

I have identified 3 types of layering so far, which pretty much occur all of the time. Having said that, some laying will simply be market chasing strategies: placing orders always a certain level below or above the market in the hope to gain value from rare events. In increasing order of aggressiveness, the types of layering found so far are: 1) Basic resting order layering: orders, usually very large, are placed in the book and left there. The intent may be to give a false impression of “support”. 2) Variable layering: A large amount of volume is added for a short period of time, deleted, and then added back at a higher (in case of bid) price. The intent may be to move the market. 3) Finally, the most aggressive form of layering occurs at, or very close to the best bid or ask price. In this case the layering immediately affects the midprice and can gradually move the market.

The first type of layering is not very exciting, so I will not show it in isolation, but instead start with the 2nd type. The first example, below, shows a 6 hour snapshot between 5pm and 11pm on 2014-10-31. Here, the bid side of the book appears to show consistent layering activity with high volume (orange/red orders). It could be argued that this strategy is following the price. However I selected this example since the “climbing” activity seems to persist regardless of market direction. 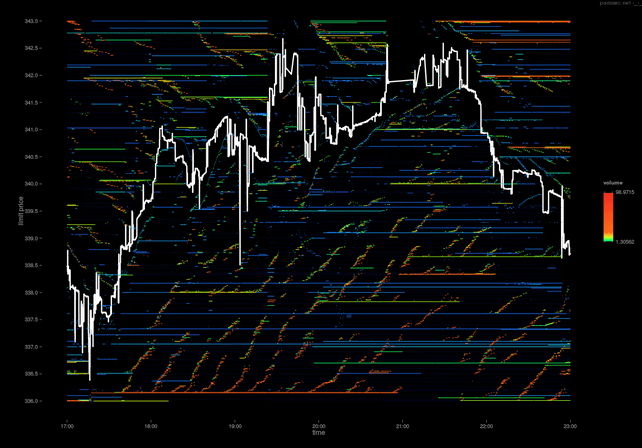 This climbing activity is best visualised in terms of order events. Below, in a 1 hour example, the price climbing pattern of add/delete/add, at incremental price levels on the bid side is quite obvious. 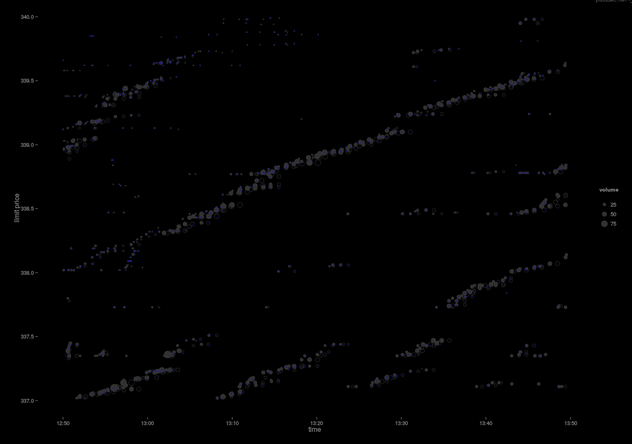 The next example, from the same day, shows the same pattern. However this time, on both sides of the order book. 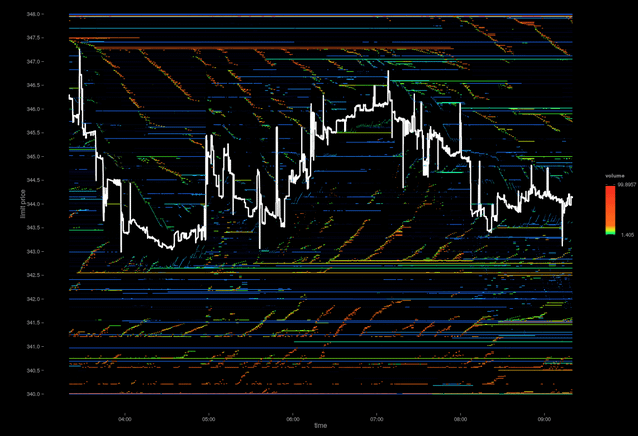 The next example, along with the associated depth chart, taken from 2014-10-03, shows some very interesting activity. The void beneath the midprice around 12pm is the result of quite a large market impact; the results of which are best viewed in the aligned depth chart. Just after 1pm, a large resting order (~300 Bitcoin) appears below the bid and then above, illustrating the first type of layering. 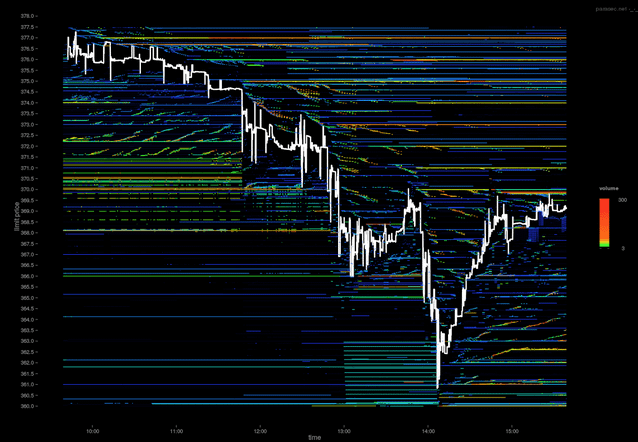 On the right hand side of the above visualisation, there is some tightly packed layering occurring. Closer examination, below, shows a number of orders placed very close to the best bid. I’m not sure if there is anything suspicious happening here (besides the climbing bid), however it is interesting to see that all of the orders are hit at 15.40. 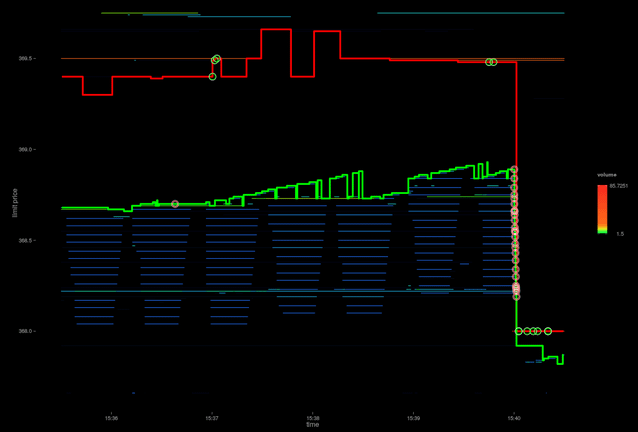 The next example, from the same day, shows layering on the ask side of the book. This time, the orders are removed before they can be hit. 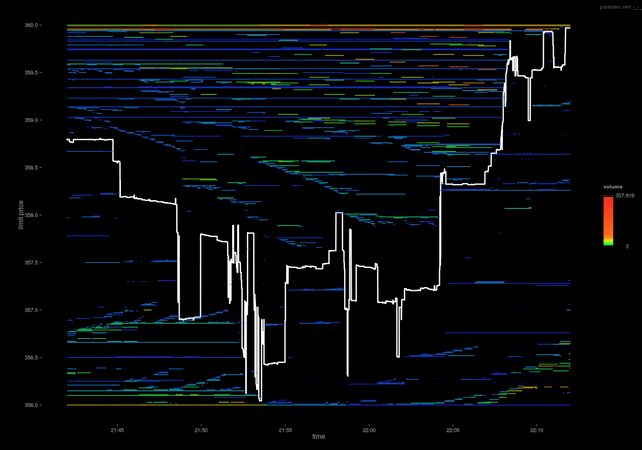 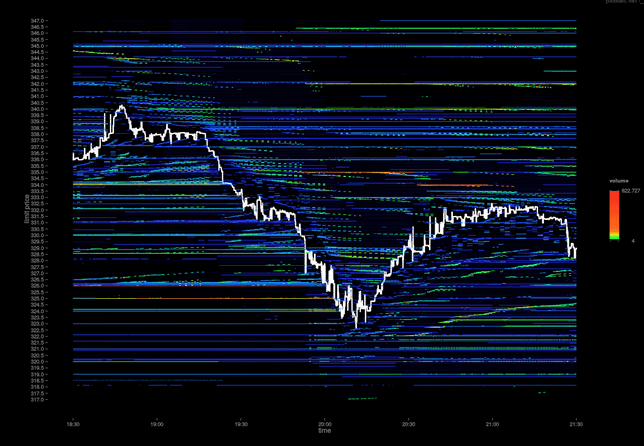 Zooming in to just before 8pm and restricting the maximum amount of displayed volume to 100, shows the layering above the midprice in some more detail. 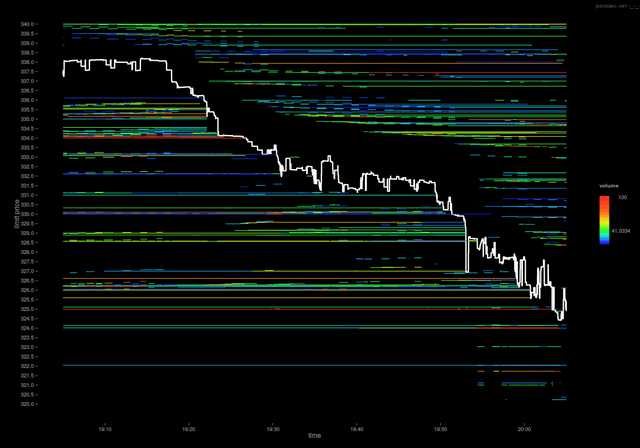 The same time period and price level range shown as order book events clarifies the situation. The layering on the ask side of the book seems to be stacked in blocks. The whole block is shifted down incrementally, as can be seen by the add/cancel pattern below. 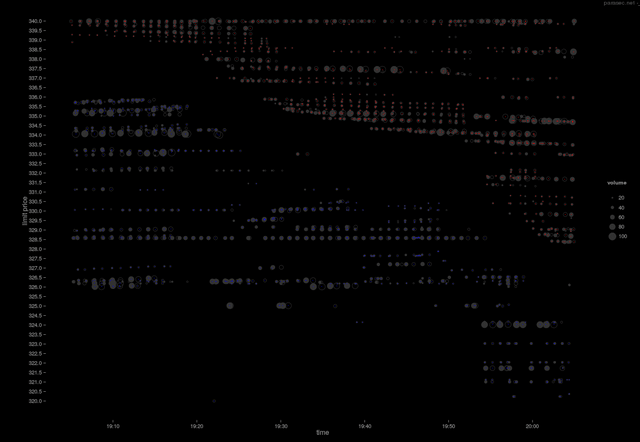 The final level of layering aggressiveness occurs at the market spread. The example below, from 2014-10-03, shows the best bid slowly increasing. It could be argued that this is some kind of pegged-order, however there are times when the best ask is not increasing (or in fact decreasing) while the best bid is still increasing periodically. 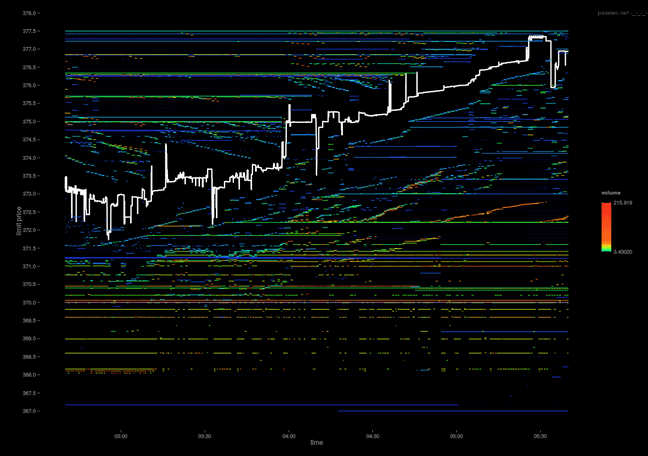 This example, from 2014-10-14, shows a more active version. Note how the market appears to be being forced upward. 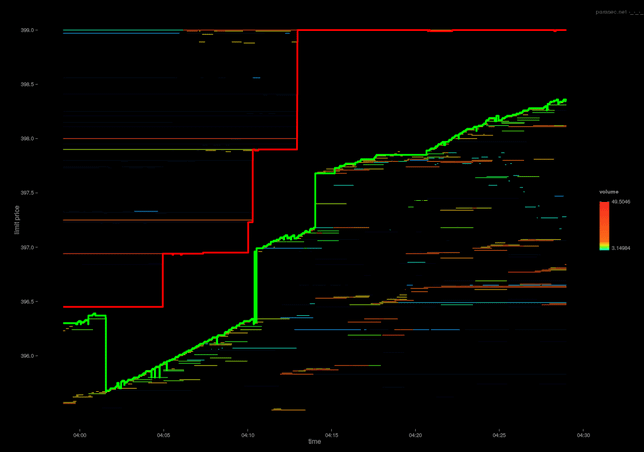 Looking at the event data for this time period shows the climbing effect in more detail. 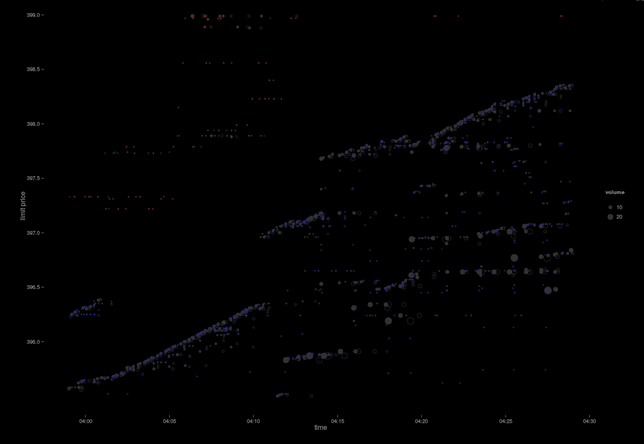 The final example, with corresponding event visualisation, shows the phenomenon occurring on 2014-10-18. 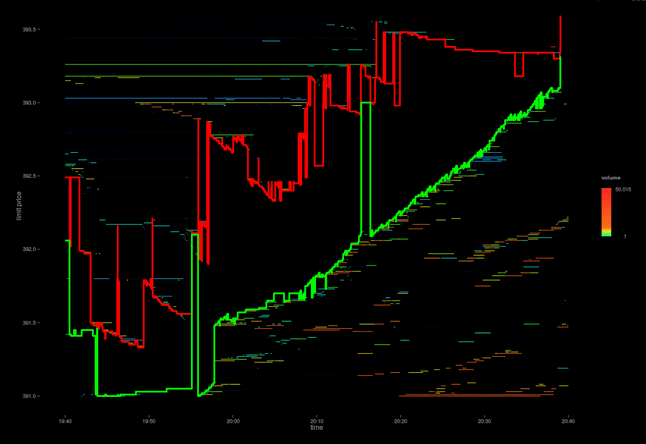 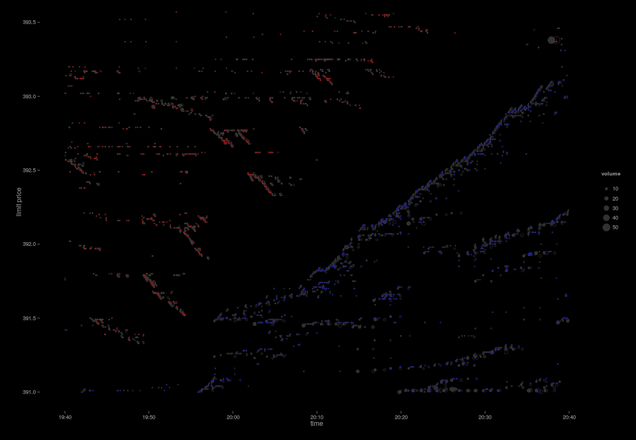