I just got around to watching the 2 part GME series on HBO MAX titled Gaming Wall Street, and it was refreshing to see our side of the story told authentically after a year of gaslighting by the media. I know that the issue is complicated and it’s hard to create and sustain a captive audience around complex financial instruments. However, it did not sit well with me that I finished the series with no real idea of any tangible, targeted requests that the general public could make to reform wall street. Sending a letter to your senator saying the market is corrupt and it needs reform is simply too vague to take action. It also did not sit well with me that the story ended with the narrator throwing up their hands and saying that maybe Melvin swapped out the liability somehow, and no one really knows what is going on. I think the research done in this sub paints a pretty compelling picture of what happened, and there are signatures of it all over the data that we do have access to.

I hope that this post sheds more light on these swaps, and allows the broader community to begin to understand what is going on here. This work builds off of some great DD by others in the community, namely u/Zinko83 and u/Mauerastronaut on variance swaps. As with all of my posts, it would not be possible without the efforts of the group of people that u/Gherkinit compiled in the community to investigate the derivatives used on GME. Without the rule documenting, data collecting, and derivative investigating done by this group, I would not be able to write this post.

Let’s start where the documentary left off.

The documentary ended with a vague notion that Melvin could have swapped their GME short to some unknown secondary intermediate in some unknown way and we simply don’t know what happened. However, there is a clear signature of what swaps were used, when they were opened, and when they expire(d).

I like to think of the Melvin Superswap as an analogy to the Curly Shuffle from Three Stooges fame.

While all dance moves involve moving your arms, legs, and torso, the Curly Shuffle is such a unique combination of those general movements that it is unmistakable, and the shoe marks left on the floor are pretty strong evidence that a Curly Shuffle occurred. The Melvin Superswap is the same, except instead of leaving shoe marks on the floor, they left a very specific arrangement of put options on the options chain.

Welcome to the Family (of Power Law Swaps)

To understand this signature, I have to introduce some pretty complex financial instruments: Volatility, Variance, and Entropy swaps. There was some great work by u/Zinko83 and u/Mauerastronaut that taught us about variance swaps, and made a case that these swaps were used on GME. These have been used on the market for a long time, but it was only relatively recently (late 1990’s early 2000’s) that financial mathematicians found a way to price and hedge these instruments using the underlying stock, stock futures, and options. Much like the Black-Scholes model (1973) provided a way to price options based on the price and volatility of the stock, the equations for swaps provide a way to price these instruments based on both options and stock positions. Fortunately for the reader, you don’t need to have PhD in mathematics to spot these swaps in the wild, when they are created using other derivatives like options! You can learn more about volatility, variance, and entropy in the linked academic papers.

Before we proceed too far into the weeds of power law derivatives, let’s take a moment to describe what they are used for and why they might have been useful to Melvin et al.

The Melvin Superswap is a Really Short Dance

Imagine you are really short GME. Perhaps your name is Melvin. The price skyrockets, causing your short position to be so hopelessly blown up that there’s no way you can close it. Wouldn’t it be great if you could take your investment, that is very sensitive to the price of GME, and swap it for an investment that is only sensitive to the volatility of GME, or how much GME price fluctuates each day? Even better, wouldn’t it be awesome if that volatility position could be partially hedged by your existing short position? Yes, yes it would be great.

This is in essence what a power law swap allows you to do. It allows you to create an investment that only cares about the volatility of the stock, and doesn’t care at all about the price. So if I can just get someone to be the counterparty to a power law swap with me, I can convert my price sensitive short position to a variance sensitive position. Who the hell would take on a trade like that on a meme stock? Sounds super risky right? Well, this is where dispersion trading, originally discussed by u/Mauerastronaut, comes in. There are very big players in the market that profit off of arbitrage between the variance of an ETF and the sum of the variances of the underlying stocks within the ETF. One of these players could simply incorporate this variance swap into a dispersion swap covering a large part of, or even all of, the market. This would allow Melvin to do two things. It allows him and his counterparties to spread their very immediate crisis in one stock out over both time and over many other stocks. This is likely why we see so many other retail based stocks seem to run around the times that GME runs (or should run), like the last OPEX that just recently ended (take BBBY, DDS, and M as examples).

Okay, so now I hope you see the value of these power law derivatives to Melvin. It allows him to survive another day. But until there is evidence that these swaps were opened, I’m just blowing—as one of my trolls likes to say—shit out of my ass. “So Dr. Ass Shit Blower, what makes you think these swaps were opened on GME?”

Altered Swap: Welcome to your DOOMP

I recently played Altered Beast, an old SEGA arcade game, on the Nintendo Switch and I think of the villain catchphrase every time I hear DOOMP, or Deep Out of the Money Options, on this sub.

So what does it mean that they are hedged with a power law of option strikes? In a word, DOOMPs. These power laws require the purchase of a large amount of DOOMPs, and the number of options at each strike can tell you: 1) that these power law swaps exist, and 2) provide evidence of what kind of swaps exist. An options hedge for a power law swap usually looks something like this: 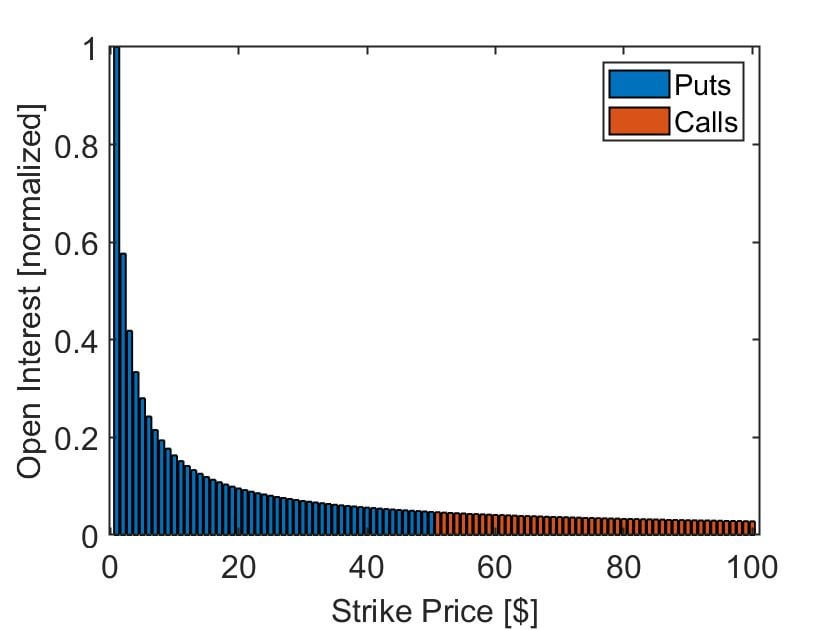 A typical example of the options required to hedge a power law swap.

Notice that the most striking feature of this swap is that it requires a large amount of DOOMPs! If you look at one example of the DOOMPs during the January Sneeze, you can see clearly that there is a significant portion of the open interest that follows a power law. 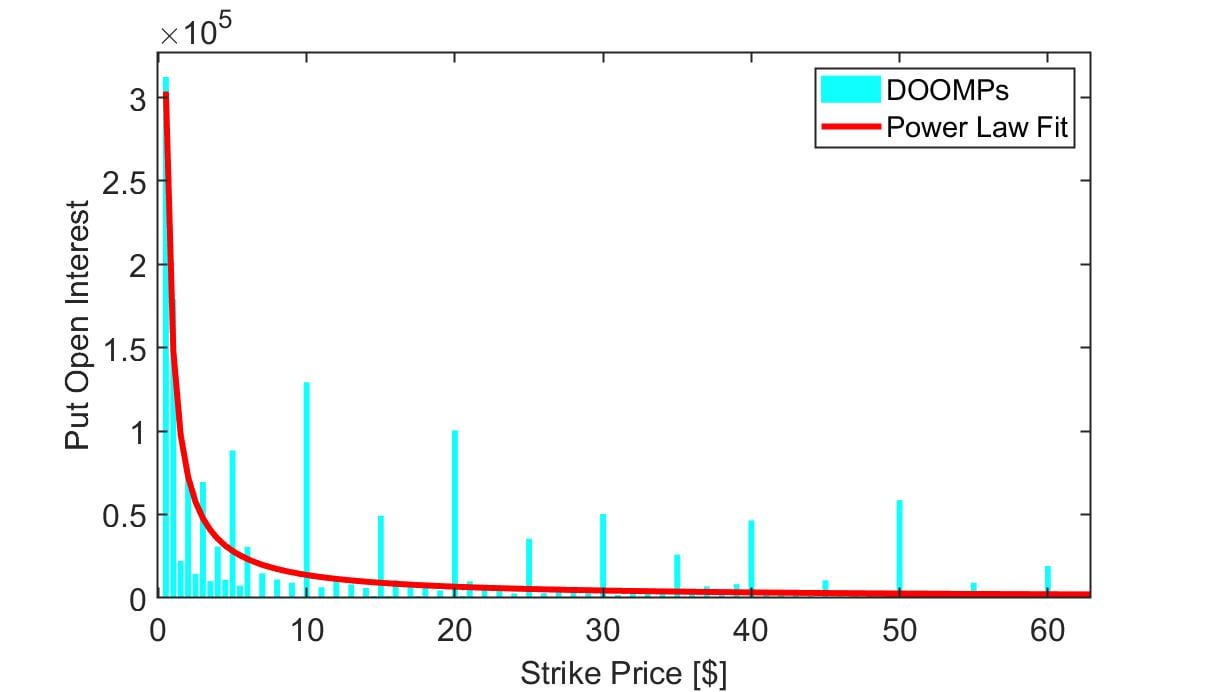 Melvin’s got DOOMPs like a truck, truck truck, Shorts like what, what, what, baby hedge your butt (all night long). Let me see that SWAAA-AAAA-AAAP…

This is Melvin’s Curly Shuffle: The Melvin Superswap. It’s right fucking there for everyone to see. It’s practically screaming at us. The best part about these power law DOOMPs is that there’s not really a good reason to open them like this for any other reason than to hedge a power law swap!

Has the music stopped?

I took this analysis a step further, and I fit a power law to the put open interest by strike for every day since January 4th 2021 until mid February. Below is a plot of the fitted power law exponent for each day and the 95% uncertainty bounds.

In the beginning of January before the sneeze, there were no power law swaps on the chain, as the exponent was essentially zero. A few days before the sneeze, a large DOOMP position landed on the chain, with an exponent of -1. That signifies a potential entropy swap. In March a large DOOMP position expired, and the chain then resembled a power law with exponent -2. That would be a variance swap. Throughout the year the exponent drags around, but this DOOMP power law persists throughout all of 2021, and still persists despite most of the original DOOMP position opened in Jan 2021 expiring. The interpretation of this data is pretty simple: In January during the sneeze, someone opened power law swaps on GME, taking a position in GME volatility. This volatility position still exists today.

One puzzling feature of the DOOMPs that I haven’t shown here but has been shown by many on this sub, is that the number of DOOMPs has decreased drastically. Does this mean that the number of swaps have gone down? Not necessarily. There is no requirement that a swap include DOOMPs in the hedge. If they are excluded, it just means that they aren’t hedging at those prices. They no longer expect the price to drop back down to $5, so there’s no reason to hedge that far down and show everyone that the positions are still open. So at this point, we have uncovered their strategy in 2021 just in time for them to change it to something else. New power law swaps within a smaller strike window? Something else completely? We really don’t know. But we are excited to see what new dance moves Melvin creates as he tries to squirm his way off the dance floor.

tl;dr: Melvin is a terrible dancer.