A few weeks back I wrote a post about historical options chain data for GME, specifically looking at the total amount of delta present each day. The data presented and the arguments laid out led to some very controversial conclusions, namely that: 1) options were largely being hedged between July-Dec 2021, 2) during that time period a significant portion of the daily volume could be attributed to market makers hedging options, and 3) there was a strong correlation between the amount of call options on the chain and the price of the stock. I want to quickly address a few key areas of discussion that the post generated before moving into new information.

1) “You are pushing options, therefore you are a shill.”

Options carry significant risk. Do not purchase them if you do not understand the Black-Scholes model or cannot risk losing the entire price of the contract. Although I do trade options, I have never attempted to somehow financially benefit from an ape buying or selling options contracts. I am simply sharing the analyses I have done that have led me to believe that options can be a powerful tool to blow up the margin of a heavy put position, which we know is being used to suppress the price today.

Most people know that I have been working with u/gherkinit for about 10 months now trying to understand where the shorts are hiding. We believe that, while there are no data that provide a smoking gun (by design unfortunately), there are certain signatures in the available data that point to what may be going on. For example, see the great work by u/mauerastronaut and u/zinko83 on variance swaps, which is the most likely explanation for the deep out of the money puts (DOOMPS) that have been growing in popularity again on the sub. The work that I do is never just my work. Pickle man has put together a group of about 15 or so people that all bring various skills in data access, data mining, numerical methods, market knowledge, etc that all get mixed together to turn a sea of random data into a theory. I asked him to post the last one because frankly I was tired after putting my pieces together and needed the rest of the team to clean it up and get it live. I don’t really care about reddit karma, so I don’t really care who posts our work.

3) “You are skeptical of DRS, therefore you are a dumb dumb and a shill trying to destroy the sub.”

That’s fine. DRS –> ?? –> MOASS is a compelling theory. I like jumping on Computershared and watching the numbers go up. I’m impressed by the sub’s ability to data mine the DRS activity. Lots of cool things going on with the DRS effort. What I am not fine with is the DRS mob insisting that DRS is the only way to cause MOASS and that DRS is guaranteed to cause MOASS. Locking the float in DRS to initiate a short squeeze may work, but it is unproven. I’ve been around long enough to remember Ape Vote. I am disturbed by the misinformation being spread about DRS and the arrogance with which DRS is discussed, not DRS itself. Full disclosure: I’m not convinced DRS will do what is being claimed, I have not DRSed, and I likely won’t unless new evidence is presented. That being said, THIS POST IS NOT ABOUT DRS. You are free to post DRS spam in the comments as many are wont to do. I will not be responding to any discussion of DRS, as it is off topic.

Okay, onto the good stuff!

In my last post about options with u/gherkinit, we developed a methodology to study the impact of the total delta on the option chain on the price of GME. In it we used a variable called the Relative Delta Strength (RDS). The RDS is calculated by taking the delta for each open contract and summing it up, and then dividing that net delta by the absolute value of the total delta on the chain. So then RDS = 1 when all delta is from calls and RDS = -1 when all delta is from puts. When call and put delta is equal, RDS = 0. We then compared this to daily closing price from July 2021 to the middle of January 2022 and showed there was a strong linear correlation between the two. Linear is interesting because it means that puts and calls are being hedged equally.

A number of people asked about the data in the first half of 2021. I initially chose to discard this data as it seems to mostly follow the trend we found with some noise during the runs. Motivated by questions about it, I decided to take a closer look at the entire GME saga to see if any interesting behavior emerged.

Below is an animation showing how the daily high price of the stock evolves with the daily RDS for GME from January 2021 until February 18, 2022. The data is displayed sequentially to attempt to show how it evolves over time. The data is broken up into each significant run of the stock.

Daily High Price of GME vs. the RDS of the GME options chain. The data is colored based on each significant stock run.

There is a lot to unpack here. For each run, there is a weak linear trend between price and RDS. When RDS approaches 0.75-1.00, the daily price tends to run significantly. Once a maximum is reached, the RDS starts to go down and the daily price follows suit. Interestingly, it does not follow the same path down as it did going up. This implies that during the January, February, and May runs there was evidence that hedging was not occurring on the call side until the risk overwhelmed them. At the peak, puts are opened, calls are closed, and the options hedging then drives the price back down. This last point is important, as it implies what the true hedging profile for GME options happens to be, as illustrated in the figure below. 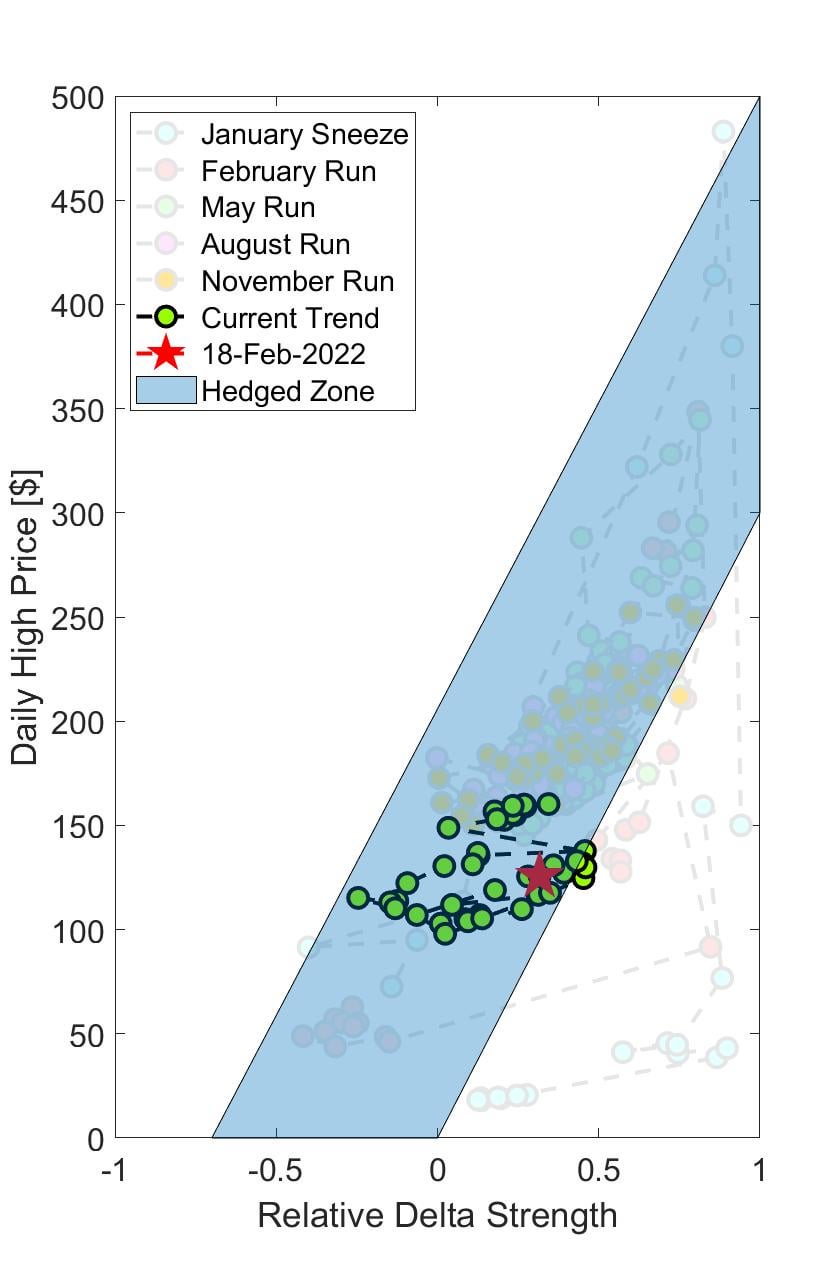 Another interesting feature of the data is that it appears to be composed of clusters and jumps. Let’s look at the current data in green to illustrate the point. You can see that there are two main clusters, with some degree of volatility between them. These clusters have similar slopes, they are just vertically offset by some amount. I believe that the slope of the line is the options hedging that is occurring, and the vertical offset is shorting the underlying. So then the blue shaded region can be thought of as the zone in which the margin of the total short position is relatively safe. Blue is where they want the stock to be. To the right of the blue area is where they start to lose control of the stock, or where their shorting effort creates too much risk for them to sustain. As can be seen, we have come precariously close to the edge of this region in the last two months, but haven’t quite overwhelmed their position enough to drive a run.

Anyway, that’s it. Just some options data I thought was interesting and my interpretation of it. I hope the community finds some interest in it too.

If you would like to learn more about the Direct Registration System, please see the top comments below.