The bright u/OfLittleToNoValue is the author of the below. 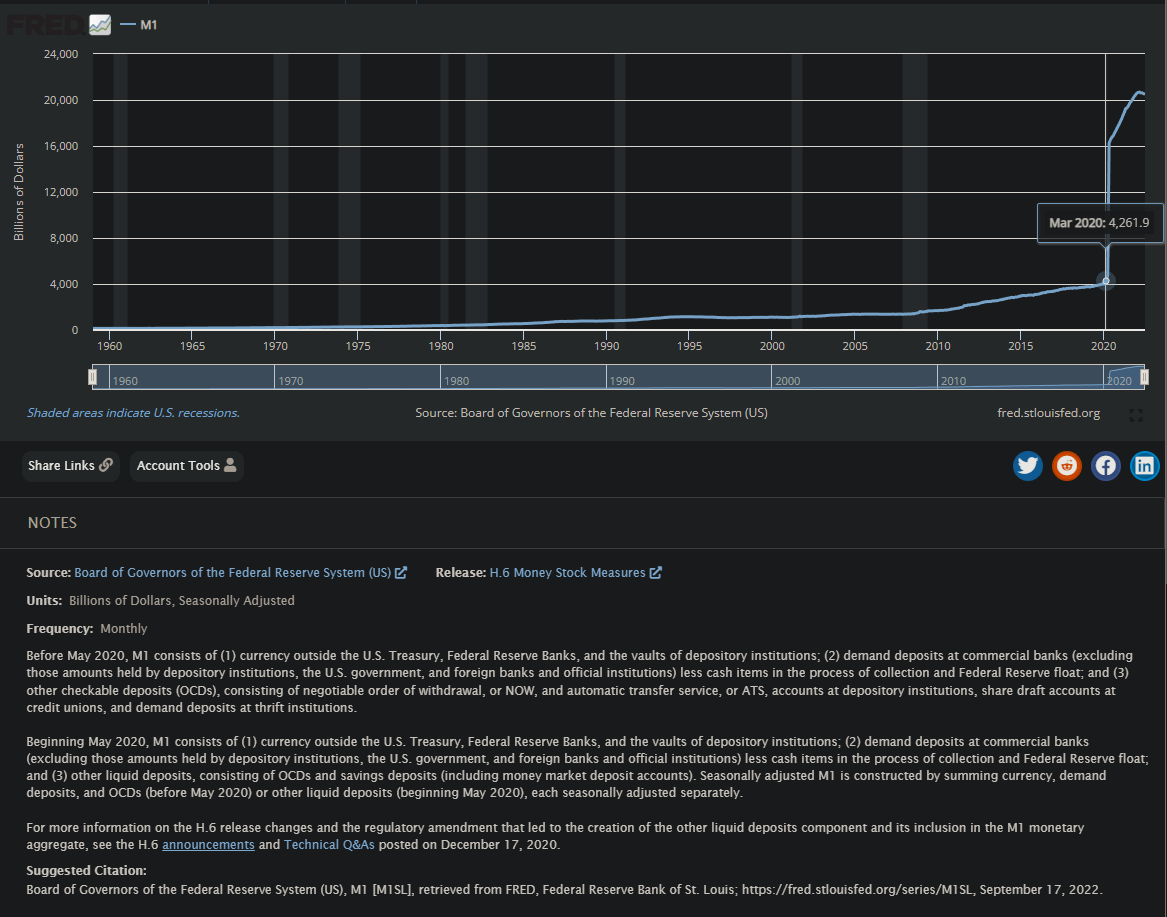 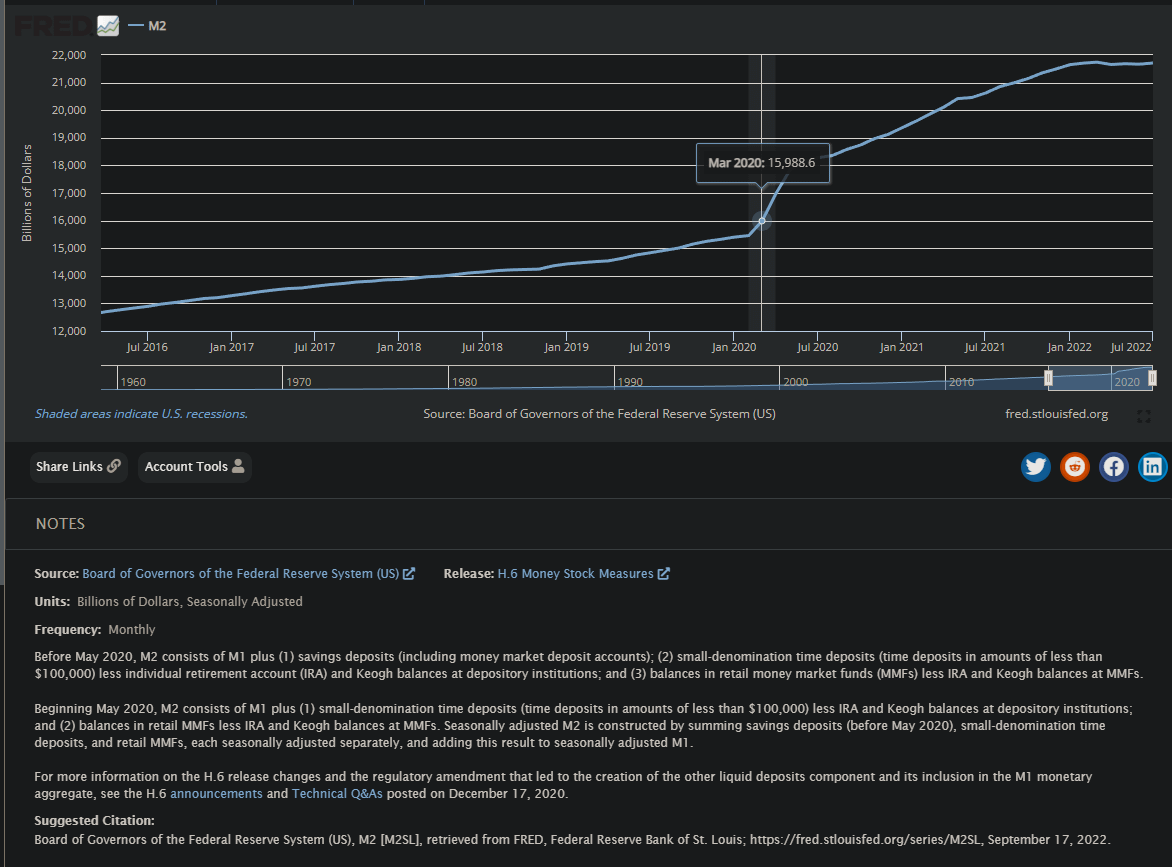 As you can see in both M1 and M2, the blue line starts going up at the same time. There’s also a note that explains starting March 2020, they changed how they calculated M1 and M2. Those are a lot of words, so maybe they explain M1 didn’t really go up 400% in a month. That’d be crazy.

How exactly did they change M1 and M2? I see that being used to hand wave away the big jump since 2020 in a lot of circles outside the purple one. “M2 isn’t actually up 30% you moron! You obviously don’t understand the Fed changed how it was calculated so now I’m going to downvote and insult you!”

So… what change was made?

MEANING: While this recalculation does explain why M1 appears to have 4x’d over night, it still means fuck all for the violent ascent of that blue bar when looking at M2 which is up 30% since said recalculation.

This FRED blog even says as much:

” The graph also shows that M1 is now close to M2. Before May 2020, the difference between M2 and M1 was large because a great portion of M2 consisted of savings deposits. These savings deposits are now part of M1, so M1 is much larger and closer to M2. M2 is still larger than M1 because it includes less-liquid assets such as time deposits. “ 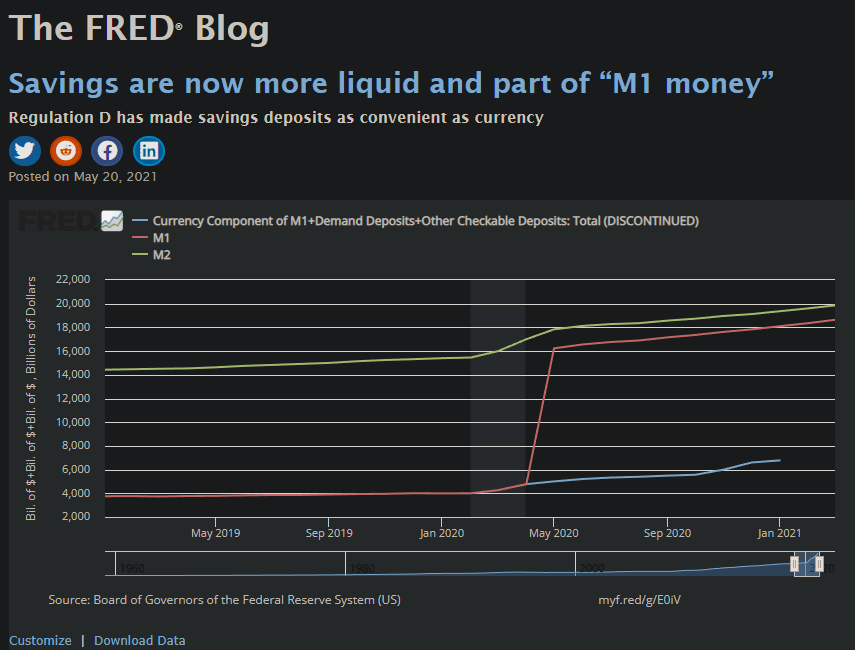 Yes, we *are* printing trillions of dollars but we’ll just blame inflation on working from home or some shit.

WE HAVE CREATED MORE MONEY IN THE PAST 2 YEARS THAN ALL OF US HISTORY PRIOR TO 2008.

USD is a share of USA. The more shares there are, the less each is worth. The inflation of USD has been like USA performing a stock split every year except you never get your extra shares because they go to those that already have most of them.

We live in a country that has deemed money protected speech AND deliberately uses inflation as a weapon against the masses.

Poverty In The US

Most people around the world think of the United States as a wealthy country. While that may be true at a national level, many individuals within the country are currently living in poverty. In fact, in 2015, 13.5% of the population lived at poverty level. In 2016, that increased to 14.8%. Children and senior citizens seem to be most affected with 14% of the senior population and 18% of children living in poverty. Current statistics indicate that the majority of individuals will live in poverty for at least 1 year of their life between 25 and 75 years of age. Additionally, poverty is more common in rural areas and inner cities than in the country’s suburban neighborhoods.

Poverty is a social and economic problem that does not seem to be improving in the US. For example, the number of people living in extreme poverty, less than $2 per day, doubled between 1996 and 2011. The situation is so pronounced that the International Monetary Fund issued a warning to the US government in June of 2016. This warning recommended that the government fight poverty throughout the nation by raising the minimum wage and mandating paid maternity leave to incentivize women to join the workforce. This article takes a look at the rate of poverty on a state level. 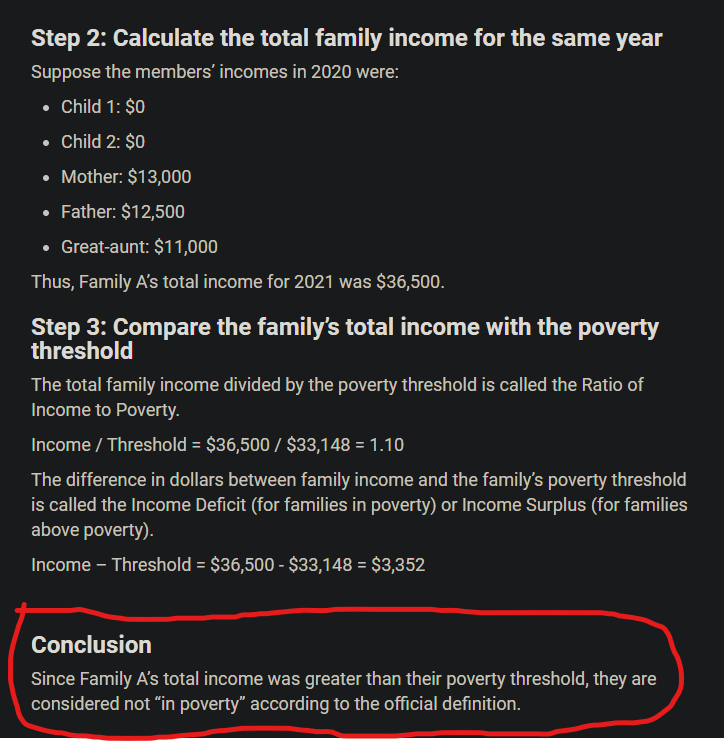 So, money supply is UP 30% and poverty is getting WORSE *DESPITE* thresholds for poverty being so ridiculous that a family of 5 with 3 working adults surviving on $12,500 for a year after housing ISN’T considered poverty. 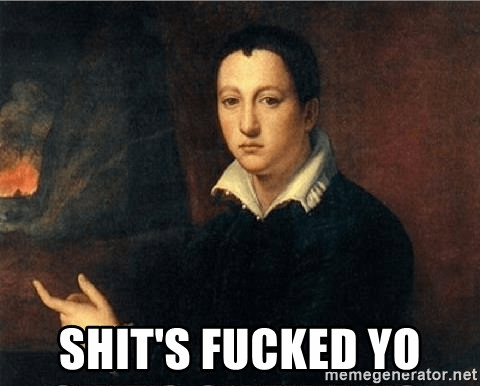