An oldie but goodie! The below is an opinion expressed by the honorable u/ Alert_Piano341 . I don’t necessarily agree or understand all of the below. The information is provided for entertainment and educational purposes only.

Half backed research post. I am a procrastinator so I will never finish this, please use any information that is worthwhile.

TLDR- u/pwnwtfbbq showed us that this GAME has been going on since 2004-2005. Abbot showed us that the Sold not yet purchased liabilities was expanding for Citadel from 2019 to 2020 and that line item is most likely used for Naked shorting. “Where are the shares” goes into great detail on how the ETFs are used to short GME, and that the entire ETF structure has been squeezed up for years.

What if I told you citadel Sold but not yet purchased liabilities went from 0 to 5 Billion from 2003, to 2005.

–Citadel Has no CLothes– shows that Citadel Sold not yet purchased liabilities is expanding, highlights expanding option derivatives in the post as well

–Knight Capital group and Citadel (my post)- Shows same thing as “citadel has no clothes” but also compares Citadels “sold not yet purchased liabilities” to similar companies. Shocker the only one that compares is Susquehanna….which is in the same boat citadel is in.

” And consider this: According to its own financial reports, Knight’s “sold not yet purchased” liability jumped from $385 million at the beginning of 2008 to $1.9 billion by mid-2011. “

–pwnwtfbbq post – Awesome post that shows empirically that GME has been Manipulated by Citadel and melvin since 2004 and shows entry points.

Sold But not purchased recap-

Sold not yet Purchased comparison

“Jim Angel, the business professor, said there could be other explanations — such as Knight’s growth as a company during that period — for why the “sold not yet purchased” liability ballooned. But, he said, market makers are typically “in the moving, not storing, business, and like to keep their inventories as small as possible.”

Knights capital “Sold not yet purchased Liabilities” went from 385 million in 2008 to 1.9 Billion in 2011 and that set off red flags……Citadel is sitting at a cool 57 Billion and Sus is at 80 Billion.

Ok but u/pwnwtfbbq showed that the GAME really started around 2004, which probably started with shorting of the ETFs as the where are the shares DD points out……2004 lets see 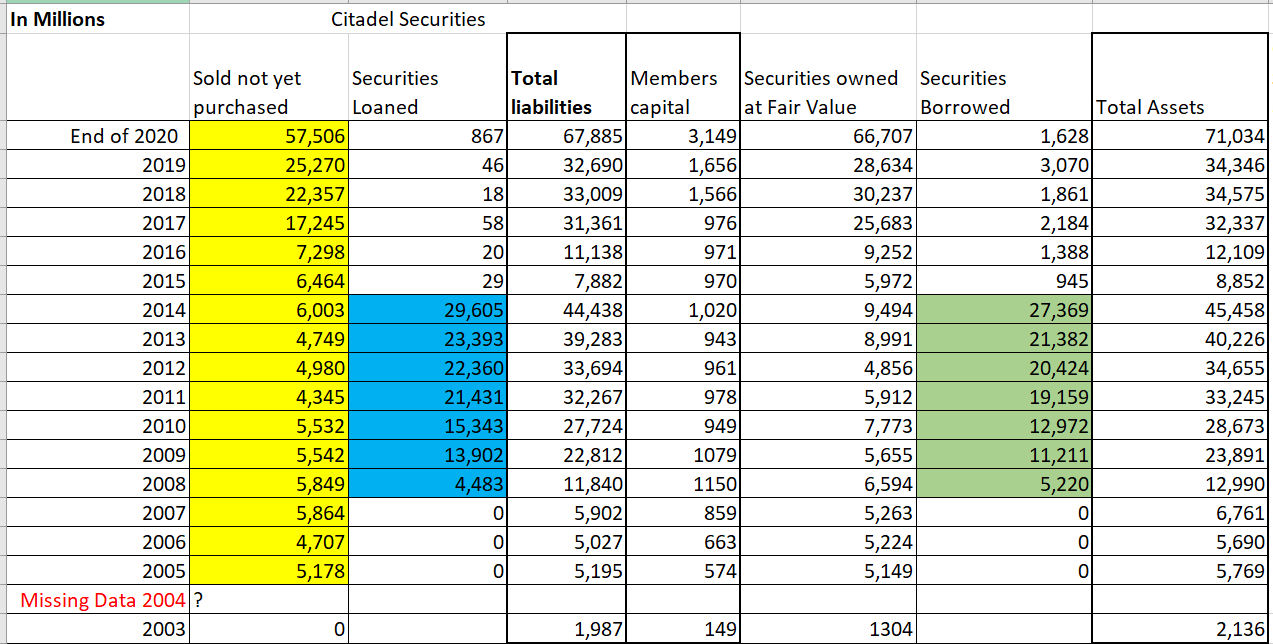 Select Items from Citadel Securities Balance sheet over the years

I cannot find the annual report for Citadel Securities on the SEC website… the link for 2004 goes to a different document. 2004 seems like the time Citadel started naked shorting, or just using Citadel Securities as a leverage account for their related entities.

2008 crash- My theory is they used Citadel Securities Sold not yet purchased balance account as a infinite money glitch at first to leverage up their other other firms. Selling securities to Firm A, to Firm B then not actually paying for them. Increasing their liabilities From 2004-2008 I dont think they were Naked shorting, just being very reckless. They ended up in a bad position in the ETFs holding GME after the 2008 financial crises.

2008-2014- there is a video of Kenny at a function saying that after the crash they had to do whatever it took to survive(I will find video later). Again a securities trading company should have been A-Ok during the crash unless they did some shady shit. they are in the moving business they should make their money on volume and best execution. They borrowed a ton of shares and lent them out to stay alive while keeping there Sold but not yet purchased liabilities between 4 to 5 billion.

2015– Citadel somehow offloads all their liability (have no idea how) they either used the run up in ETFs (and thus GME) to profit. The run up they helped create by the way.

2016-2020- Citadels sold but not yet purchased liabilities start to increase (slowly at first) until it more than doubles from 2019 to 2020. There was a Harvard paper that showed to put a company in a death spiral that you need to naked short it 10 times the float (need to find paper). Citadel knew they were partly responsible for the run up in GME and others due to their using the “sold but not yet purchased liabilities” as leverage in 2004-2005, they assumed that these over inflated assets that they were partly responsible would be easy targets, after all GME was a brick and mortar company in an ever digital world……. 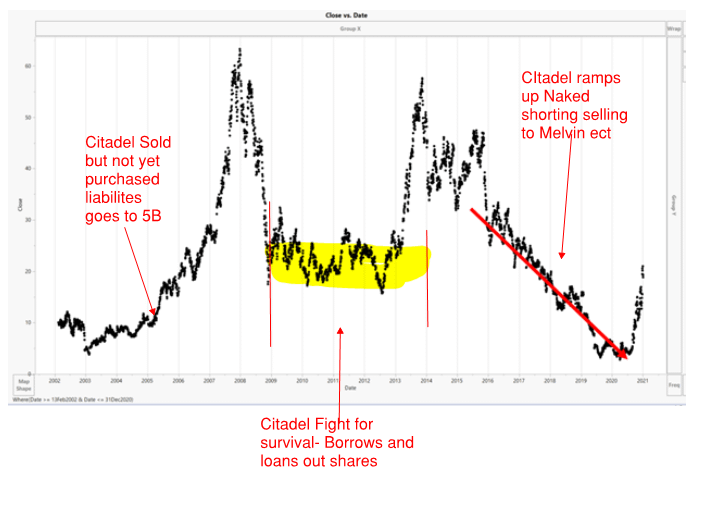 GME Squeeze– Burry steps in first, then RC yada, yada yada, Citadel is fucked with no way out. Citadels security initial foray into the ETFs and thus gme never went away that is why the algorithm continues on schedule. Citadel has been carrying ETF, GME, ECT bags since pre 2008. Has tried everything to get rid of them. SUSQ is probably in the same boat. They cant just exit, they are in way to deep and have been sinse 2004-2005. The heavy shorting started 2016 but the story starts in 2004.

If you look into Citadel Sold not yet purchased Liabilities, you will see the bulk of the outstanding balance is in Derivative liabilities (with almost all the derivative liabilities being equity derivatives). That is kind of fucked up, Citadel is selling options and betting they go to zero….except in 2020 things went wrong.

So my assumption is that Citadel Securities Sold PUTs to melvin that were never purchased…. after they went to zero they owe nothing. They also sold call options to everyone else that they never paid for….except this time they owe a ton.

ETF growth information– (from where are the shares)

That information is remarkably hard to find, but this Harvard paper mentioned it.

Oh wait, lol no it’s not hard to find – Statista (not sure if reliable but looks legit) reported –

Holy Liquidity Mother of Fed, that is a fcking ton money. 5.6 TRILLION DOLLARS worth of North American stocks trading instead in ETFs. All that illiquidity, all that volatility… see what I mean? 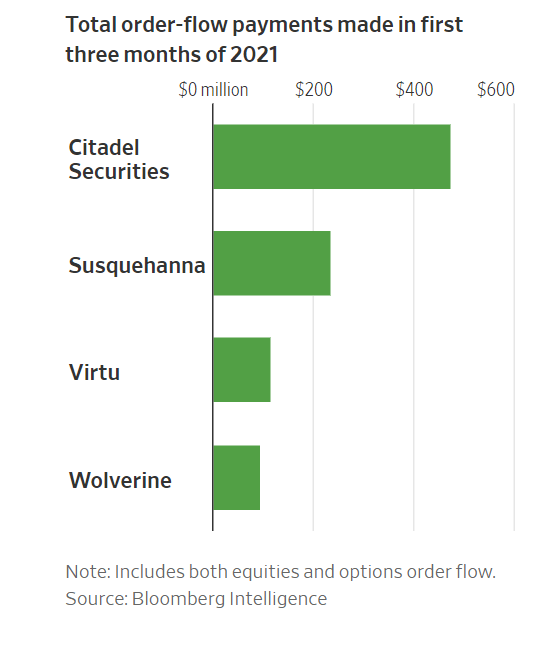