Hi, my names u/degenterate and you may remember me from such posts as –

And such comments as-

It’s high time we talked and understood, the often posted Citadel Securities LLC filing that references their $65-billion in ‘Securities Sold not yet Purchased’ admission. A filing that covered their period of business between 1/01/21 to 31/12/21. SuperStonk posts, like the one below, are what I’m talking about. Mods, please note this has been edited to comply with sub rules. 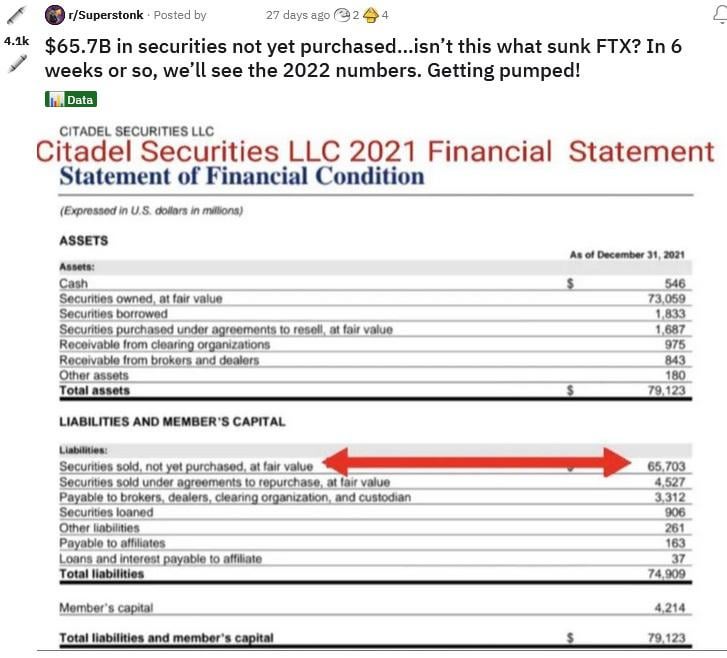 Holy shit, $65-billion in securities that Citadel has sold and not bought yet. Yoooo! Hedgies r fuk, hype-hype-hype! 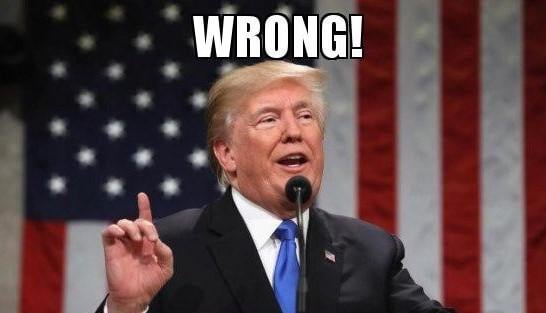 As previously mentioned, the liabilities in Citadel’s filing covered the entire operating period of 2021. A year in which the global stock market fuckin’ ripped, with an overall gain in the S&P of 27%. Every retailer was buying, you included, you dirty dog. 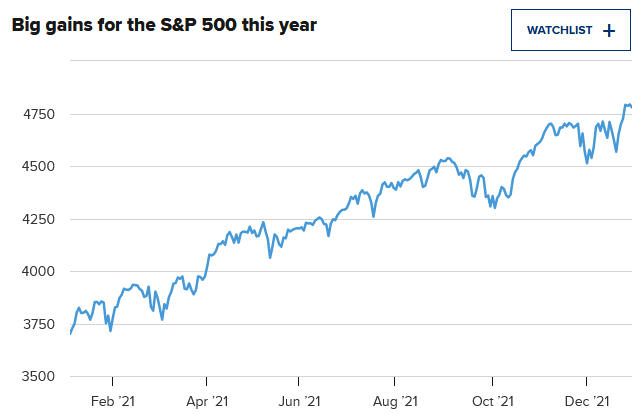 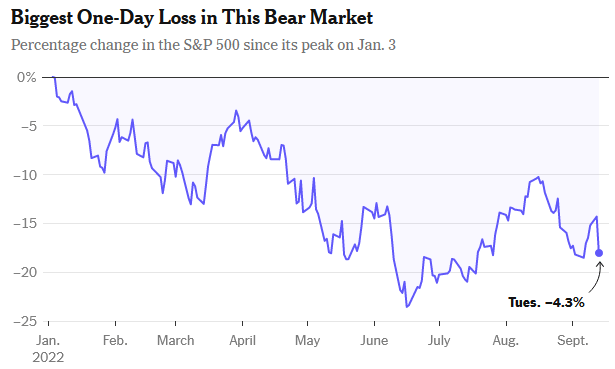 Oh my God, it even has a watermark (denoting the biggest single-day drop since the pandemic-infused June of 2020).

Oh shit! But what about all those stonks that retail bought, and Citadel had yet to purchase in their 2021 filing? Yeah, they’re hanging like sleeve of wizard right now. Here’s a sector breakdown for the first three quarters of 2022. 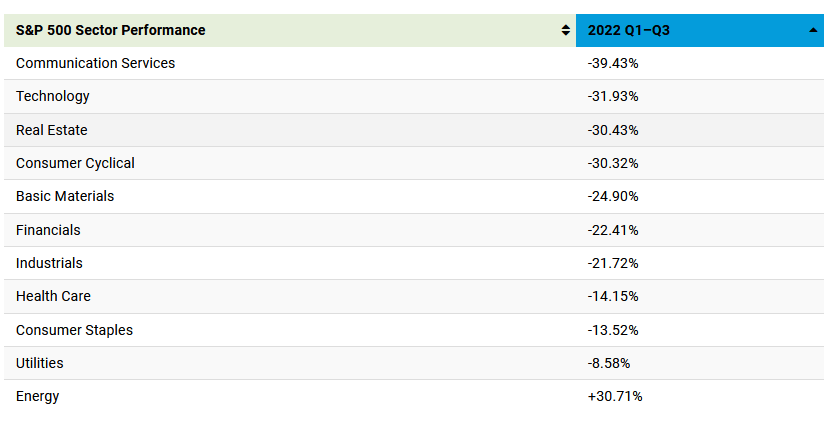 Damn, it’s like my last relationship, lots of negatives and only one positive; I get fucked.

Are you starting to get it? The reason Citadel had such a large $65-billion liability in 2021 is that they didn’t want to purchase, and subsequently deliver those securities to retailers last year when prices were high. In their view, those securities were overpriced and the 2022 market was going to get fucky whether it wanted to or not. So, they maliciously failed-to-deliver (FTD) 65 billion dollars worth of securities. Instead, Citadel pocketed retailer cash and planned on buying their shit later at a massive discount. But don’t take just my word for it. Nine months ago Dr. Susanne Trimbath was asked “What are your thoughts on Citadel’s financial statement released today? $65b of securities sold but not yet purchased?”

But Degenterate, I hear you ask, how are they able to stay solvent with such a sizeable liability on their balance sheet, that’s got to be fucking up all their shit? Well, I hear you barking big dog and the answer is something you’d never, ever, ever, ever suspect… 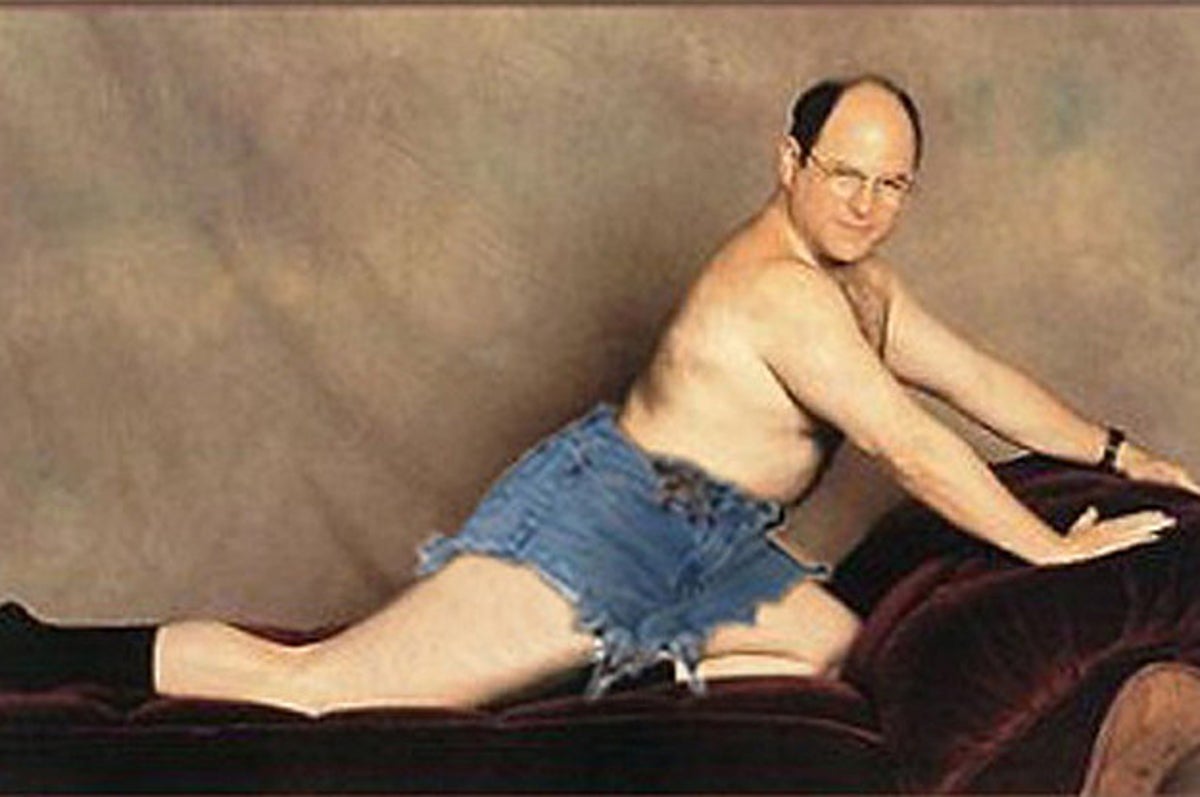 Yes, that’s right. Citadel LLC is short on the whole retail market…surprising I know. And they’re short in more than one way. Think about what Trimbath just summarised above. If you haven’t purchased something you owe, but have taken full payment for an item someone has entrusted you to buy, who benefits if the interim price of what you both agreed to purchase goes down? That’s right! It’s you, the guy who got the cash all that time ago.

That’s arbitrage, that’s the difference between what you agreed to purchase the item for, and what the item was eventually purchased for. Citadel’s $65 billion “liability” can, and should, be thought of as an untraditional, and highly immoral, short position. With the entirety of retail investors it volunteered to facilitate trades for on the opposite side of the trade. Why? Because they never intended to buy these securities expeditely or at the ‘fair value’ you, good retailer, paid for them. Instead, they wanted to make lots and lots, of arbitrage off you. But, that can only happen if the market suddenly dumps and the original purchase price goes down. For Citadel then, the further it crashes, the better.

I hope you’re angry as hell, because you should be. They knew this market dump was coming, and that’s why they didn’t buy your shit. So, effectively Citadel LLC has this massive immoral Market Maker short against its customers. Cause guess what, you don’t fucking matter to them.

“But..but…but surface level, it’s still a liability on their books right? How, then, are they staving off margin calls and keeping liquid?”

Well, the answer is…unsurprisingly… more shorts. But this time, in the more traditional sense. It is my belief that, right now, traditional shorts are the only positions keeping Citadel from being breached, like the “totally a virgin” Mother Mary when she gave birth to Jesus. 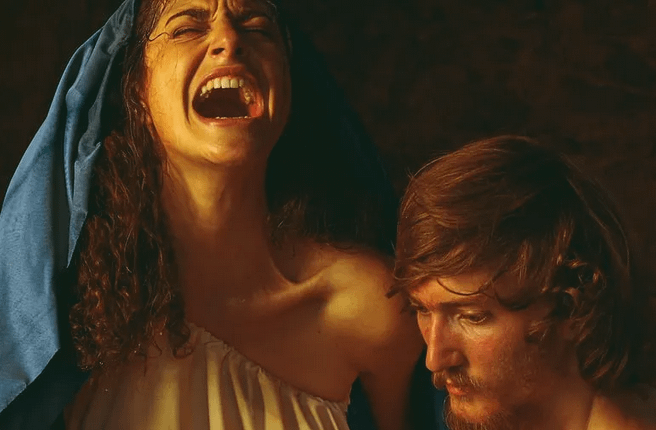 You will see him in church, any given Sunday – Kanye.

But Degenerate, where are they getting the liquidity for these short positions? I’m glad you asked, because it’s pretty clear that- 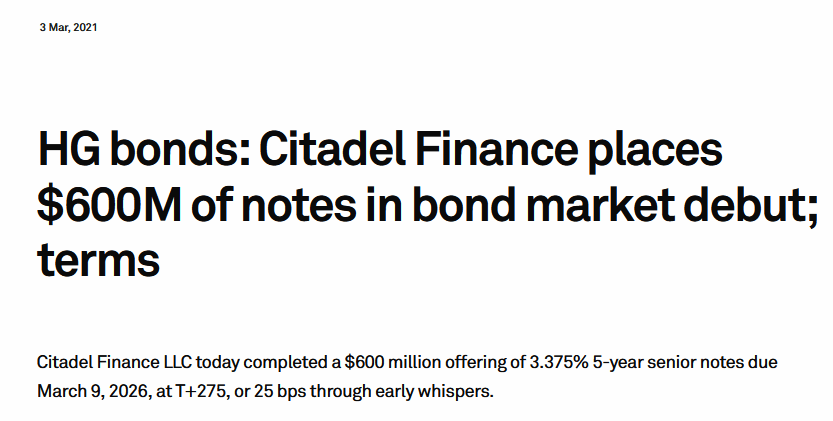 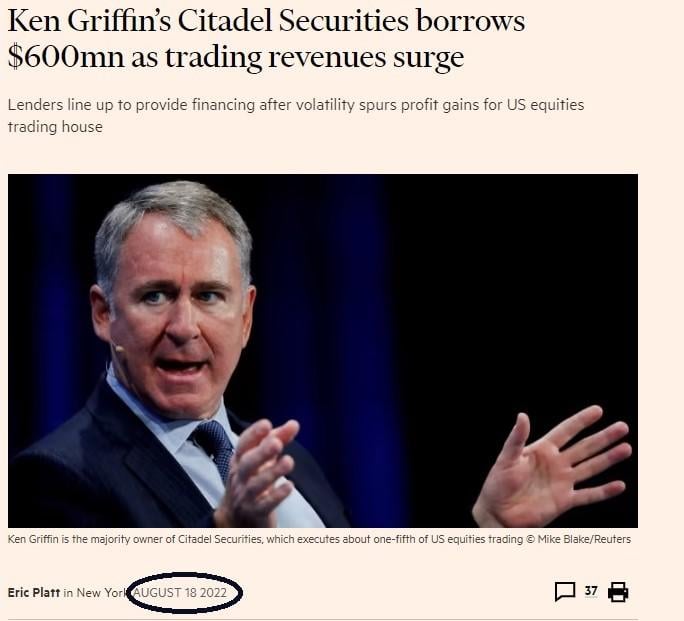 are jussst keeping them afloat. You see, it’s a race, to escape their liabilities and going overwhelmingly ‘we are bankrupt, go-straight-to-jail, fucked’. So, while many of you are absolutely frothing over the market crash, and positing how this will surely result in a failed Citadel margin call, you’ve got it all wrong. Citadel wants the market to crash more than any of you. They’re short my guys, and in demonstrably more ways than one.

PLEASE TAKE A BREAK NOW FOR A BRIEF PERIOD OF EXTERNAL REFLECTION, AND INTERNAL INTROSPECTION, WHILE YOU RETHINK YOUR UNDERSTANDING OF EVERYTHING 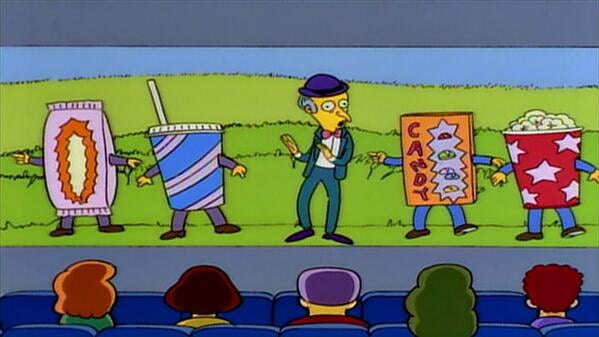 Annnd, welcome back! How was your break? Oh, you didn’t take one… Let’s carry on anyway cause we’re almost at the climax.

At this point, you’re probably wondering – ‘Ok Degenterate that was all very well -and-good, but this is Capitalism (you filthy commie). Why aren’t Citadel being eaten up and devoured by their competitors?’ Well, that’s a great question Comrade. In short (lol), because it’s a big ole’ club and Citadel actually is being eaten up. 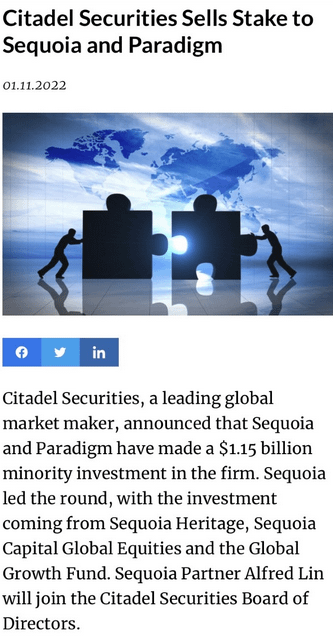 The dates are really important, the S&P peaked on January 3rd, 2022, and has been tumbling ever since. In early 2022 Citadel was in a liquidity crisis, and they needed a bail-out, instead what they got was a bail-in.

Other firms, like Sequoia above, could have moved in ‘for the kill’ anytime they wanted, but they weren’t positioned to take advantage of the wider market turmoil that a Citadel collapse would have caused. In fact, very few firms are ever going to be that liquid at all…like…Ever. Citadel collapsing is a system-crushing risk to the global market. Ask yourself, why would any financial firm want to smash the global market, that they operate on, further into the Earth’s lower crust than the extinction-level comet that killed the dinosaurs? 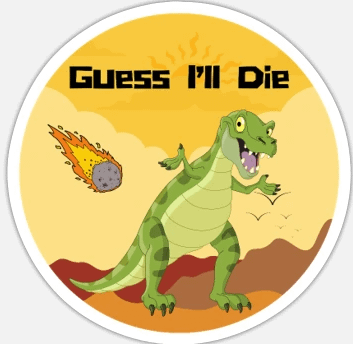 Every financial firm wanting to be the comet

What you need to understand is that there is no shadowy cabal dictating what happens to us all. Instead, there are extremely powerful people and companies, whose interests align, and in which all parties involved stand to benefit from one particular outcome. Understand, that the best thing for every financial firm in the present, is for the market to crash. That is the alignment. Citadel wants it, BlackRock wants it, Sequoia wants it, and (apparently) even you’ve been made to want it too.

So, how does it happen?

And let’s not forget our good friend the Mainstream Media which is simultaneously gaslighting retail about inflation not coming down until they capitulate in the stock market (?) – 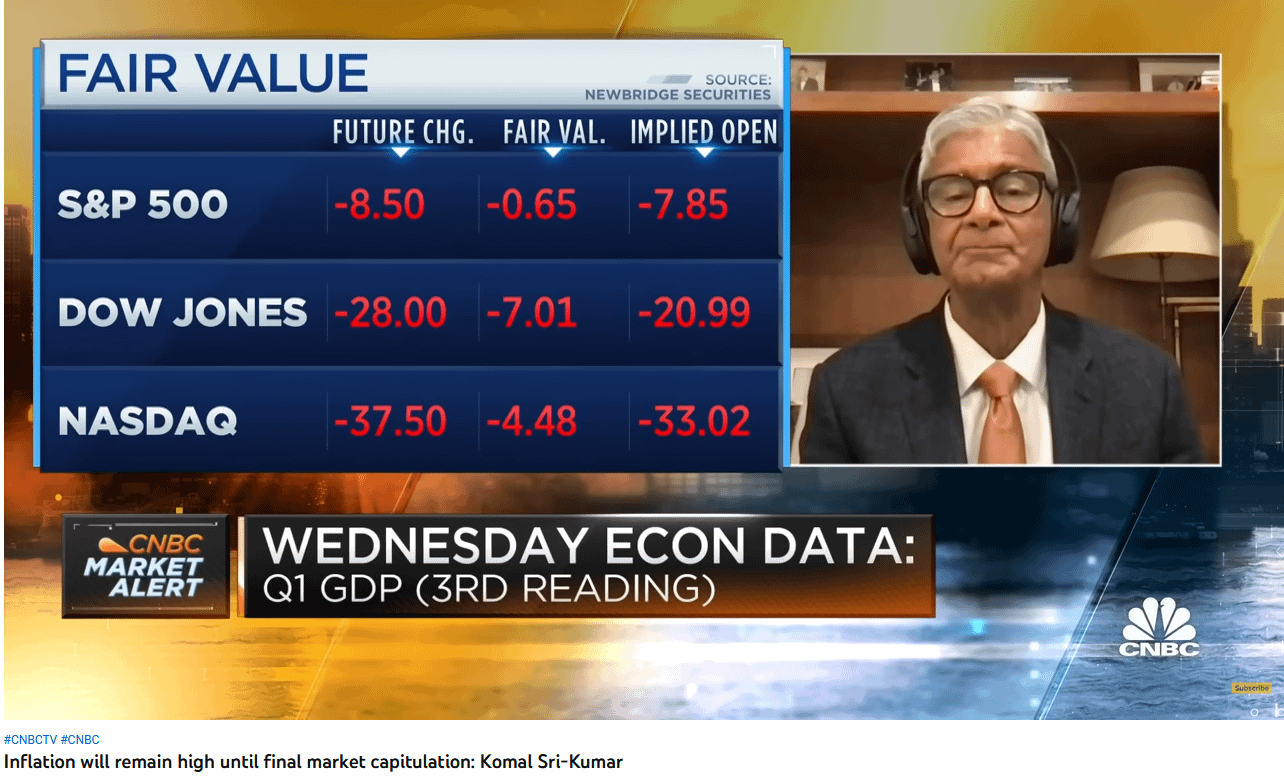 They need retail to capitulate, they need the sell-off, and they need people fleeing the markets below the prices at which they entered. To whit, apes are retail, but not all of retail are apes. Within the wider market, I guarantee you that retail capitulation will happen as things continue to deflate. Furthermore, Citadel’s $65 billion liability won’t be the smoking gun ‘haha, they r fuk’ everyone’s currently painting it as.

Kind of, but it’s also a warning.

Citadel’s next filing, for the year 2022, is due to come out at the end of this month. I wouldn’t be surprised if their liabilities are way down from the $65 billion everyone cares about, and thinks is a messiah-level indication of weakness. The market has been in a clear reverse during the year, and not all of those $65 billion ‘securities sold, not yet been purchased’ are naked $GME shorts. We can dream, but it’s not even close.

Citadel has no doubt been closing out these liabilities as people’s original purchase prices dip below their purchased securities’ current value. They shorted retail in this manner, and yes it’s absolutely heinous. Regardless, when those liability numbers do come in lower than expected, it will be weaponised against the sub, and in a very similar fashion to fudged DRS numbers.

Ahead of time, I am once asking that you don’t give a flying fuck when that FUD eventually happens. There is not a single thing, in my mind, that they can do to escape paying out on the shorts that refuse to capitulate. That is, unless individual investors within the shorted stock make a conscious decision to capitulate alongside the rest of retail en masse.

I can’t give you financial advice. There is no right or wrong, your decisions will always be your own.