In the words of the noble u/Freadom6 :

*Obligatory – I am not a financial advisor and this is not financial advice. All investors must do their own due diligence and come to their own conclusions. Question everything, including my work.

Many of you likely saw this document circulate in a couple of posts about a week ago: 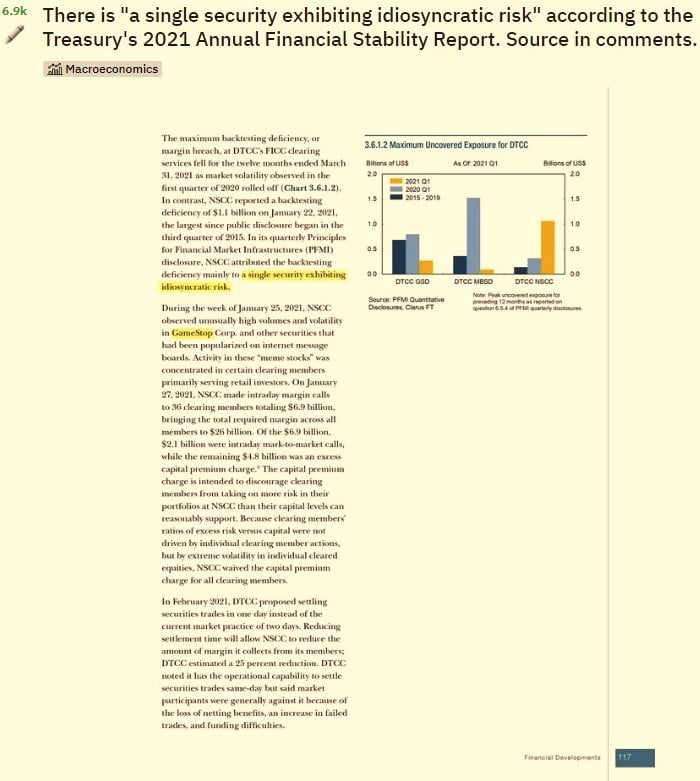 A single security exhibiting idiosyncratic risk caused a $1.1B margin shortfall for the NSCC on 1/22/21 (actually a $1.06B shortfall but we’re splitting hairs). The next paragraph describes high volume and volatility in $GME along with info on the margin calls issued on 1/27/21.

I wonder if the idiosyncratic security and $GME are one in the same? Of course they are, but let’s look at all the data to draw our conclusions.

Getting to the source of this document and breaking down this information shows how $GME is idiosyncratic to the NSCC & OCC clearing funds and their members. I have already supplied the technical DD for most of this information in this post as well as a summarization of the information in this post. So, I am going to summarize the information again, and add new info from the latest disclosures. We’ll also explore information recently discovered in the OCC disclosures which states their largest margin breach in 2021 was from a linear stock borrow in $GME from 1/25 – 1/27. The OCC is responsible for clearing and settlement services for options, futures, and securities lending transactions. The NSCC ultimately clears the OCC trades though.

The NSCC absorbed those $GME borrows from the OCC, and those borrows (along with new $GME trades being added on) continue to cause margin shortfalls for the NSCC as the NSCC has declared an idiosyncratic or concentrated security as the cause for their largest backtesting margin shortfalls every quarter since Q1-2021 (aside from one (Q2-2022) where they blamed a market self-off based on fear of inflation and monetary policy tightening… Which is just blowing smoke imo). The idiosyncratic security came back on the menu in Q3-2022 as it is relisted as the cause for the largest margin breach again. Here’s a timeline: 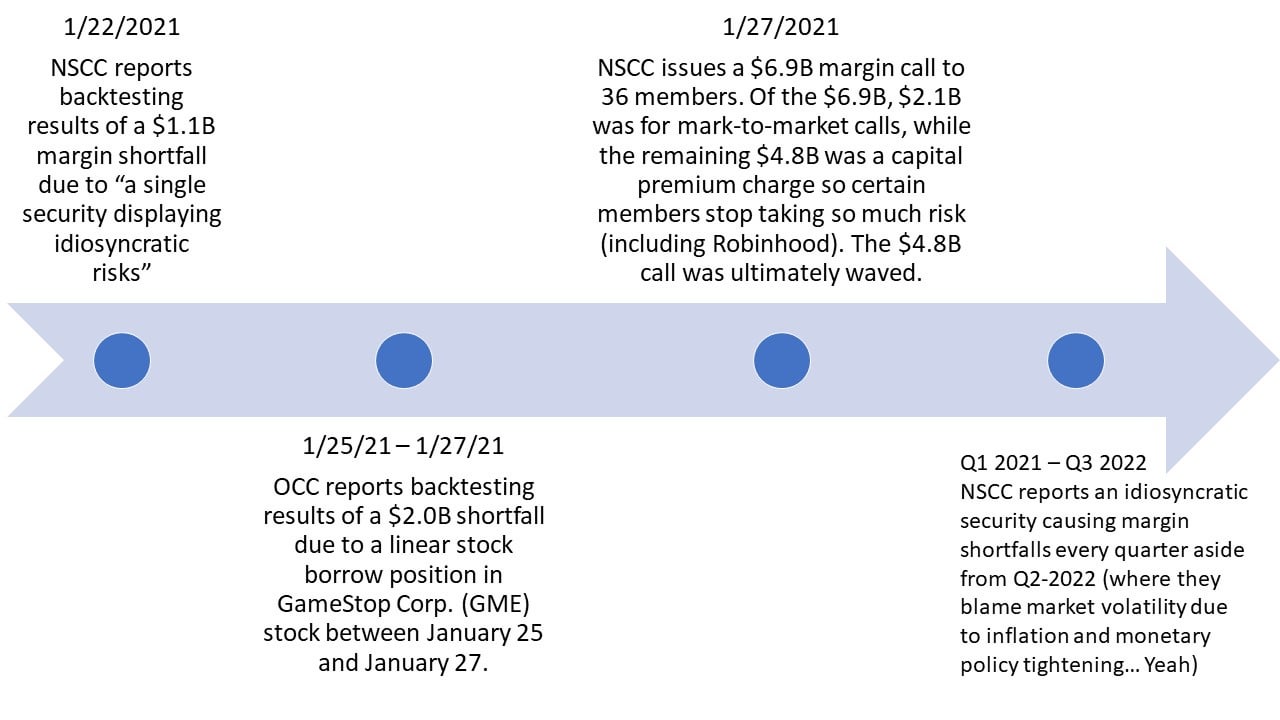 Here are cutouts from the Q1-2021 disclosures of the NSCC and the OCC:

6.5.4 on the OCC disclosure also lists “a linear stock borrow in $GME stock between January 25th and January 27th” as the cause for their largest margin backtesting shortfall which happened to be $2.0B

Since the NSCC ultimately clears the OCC trades, quite a bit of exposure was passed from the OCC to the NSCC during clearance/settlement and it makes sense why we would see a large margin call from the NSCC on 1/27/21 due to the margin shortfalls in both the NSCC and the OCC.

Since Q1-2021 the NSCC has repeatedly called out an “idiosyncratic” or “concentrated” security as the cause of their largest backtesting deficiencies. As can be seen here:

As noted, Q2-2022 is the only quarter that does not reference the idiosyncratic/concentrated security

There is another important piece that needs to be reviewed and that is the NSCC’s “Cover One” Standard which requires the NSCC to have enough liquid capital on-hand to cover the bets of their largest member. Well, it just so happens that the NSCC has sucked ass at following this standard ever since Q1-2021 as they have repeatedly found themselves short of the obligation, or they used a new rule NSCC-2021-02 (implemented 6/2021) to pull Supplemental Liquidity Deposits (SLD) from their members to avoid further shortfalls. Seems like the NSCC’s largest member sure placed a lot of lofty bets beginning in Q1-2021. 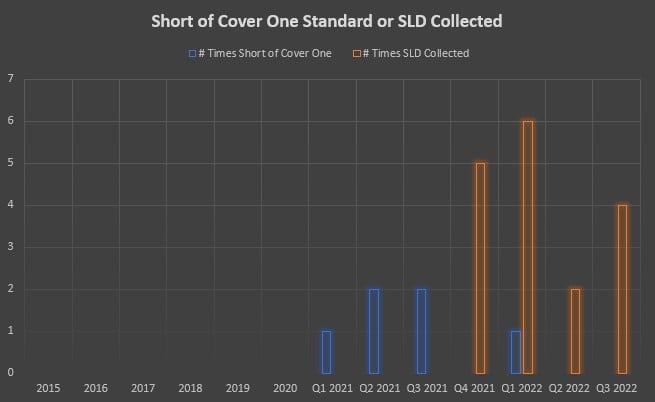 Had they not been able to pull SLD, they may have been short to cover the largest member’s potential default 23 times since Q1-2021.

Digging deeper into the filings, we see that the Cover 1 shortfalls listed in Q2-2021 were caused by Russell Index Reconstitution and June Options expirations (Hello, OCC). What Cohencidental timing, as $GME was moved from the Russell 2000 to the Russell 1000 on June 25th, 2021.

Options expirations continue to be blamed for their Cover One shortfall of their largest member’s bets along with this little nugget:

Showing the NSCC/OCC relationship and how options expiry dates are particularly troublesome for them. Almost like their largest member is trying to control a certain idiosyncratic stock through options (among other tactics not listed in this post).

Finally, a very important note is what happens if a member fails a margin or SLD call and defaults on their payment obligations: 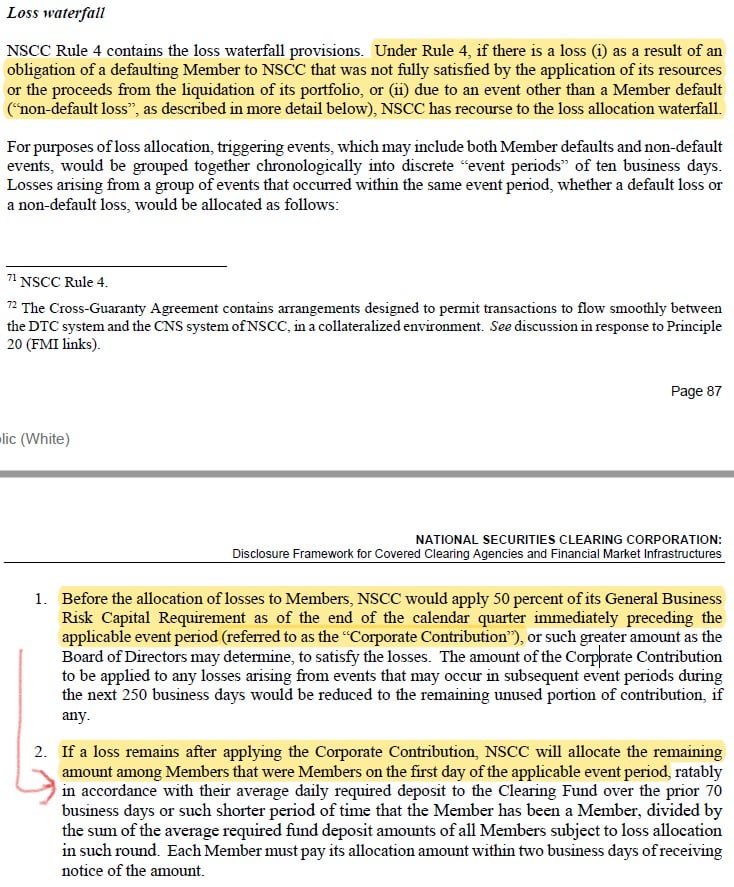 From the OCC Default Rules: 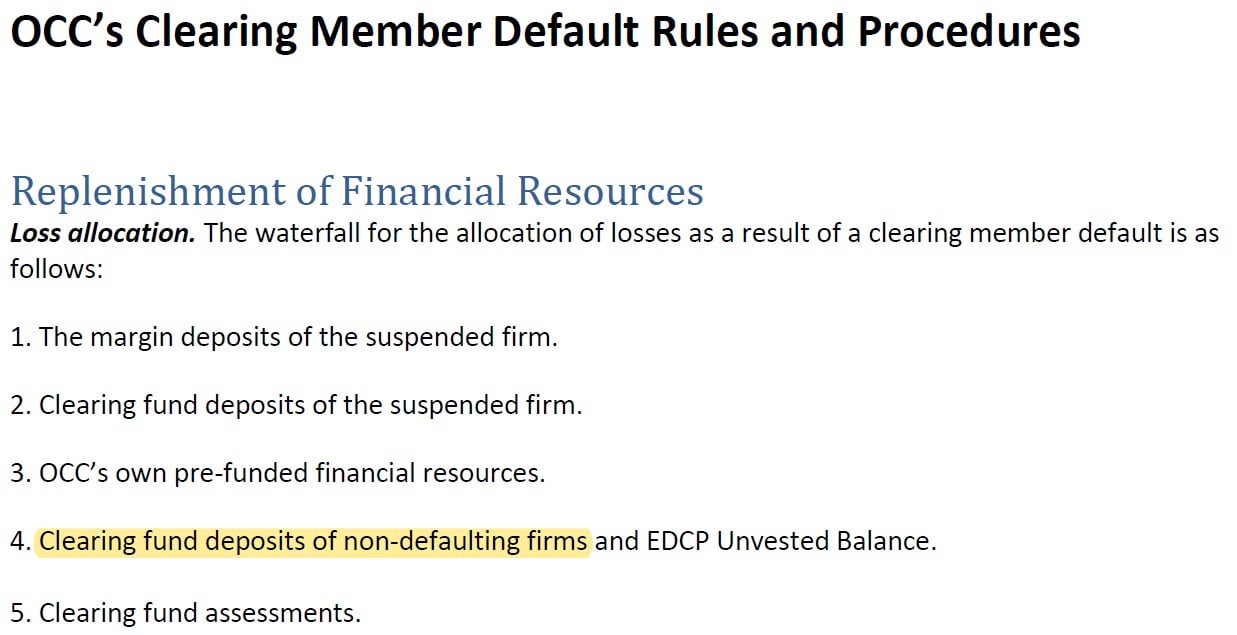 $GME is an idiosyncratic (specific) risk to the NSCC & OCC Clearing Funds and the NSCC/OCC members should a default with payment obligations over the available resources of the NSCC & OCC occur.

I wonder what happens when $GME is trading for millions of $ per share on the lit exchanges?