Listen up Apes/Slugs, I am double wrapped in military grade tinfoil tonight. Buckle up, you are about to go on a journey. Whether this is a Shitpost or DD is still unclear. Enjoy.

This DEFINITELY is not financial advice

60 days has come and gone since CNBC reported about the infamous Wu-Tang clan album “Once Upon A Time In Shaolin” (CNBC Article), and we still don’t know who the album’s mysterious buyer is. For those who don’t know this exclusive work of art was purchased by an unknown company for an undisclosed amount that settled the $7.4 million dollar forfeiture judgement stemming from Martin Shkreli’s securites fraud case.

“is going to identify themselves in the future, I’d say in the next 30-60 days”, Peter Scoolidge

Well, as it turns out I think they may be dropping hints…

When I first saw these tweets I thought to myself, they seem like song lyrics, and I googled them to no avail. Last night it clicked…Maybe they ARE song lyrics, to an album so exclusive that only a handful of people in the world have ever heard it. And that only the new album’s owner would know.

Gamestop? No way, no way,….I mean maybe…Can’t be right? But even if true then why?

Now that you mention it, if I read the lines in those tweets as if they were coming out of say…I don’t know, Method Man’s mouth? Could I see it? Maybe. 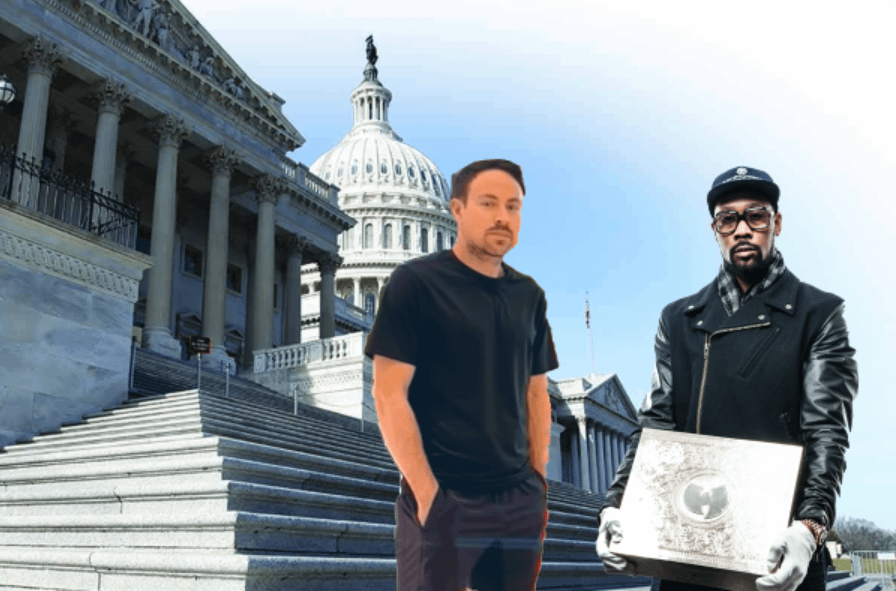 So now you might think to yourself, I can see it, but its a bit of a stretch. Let me hit you with my answer to why. 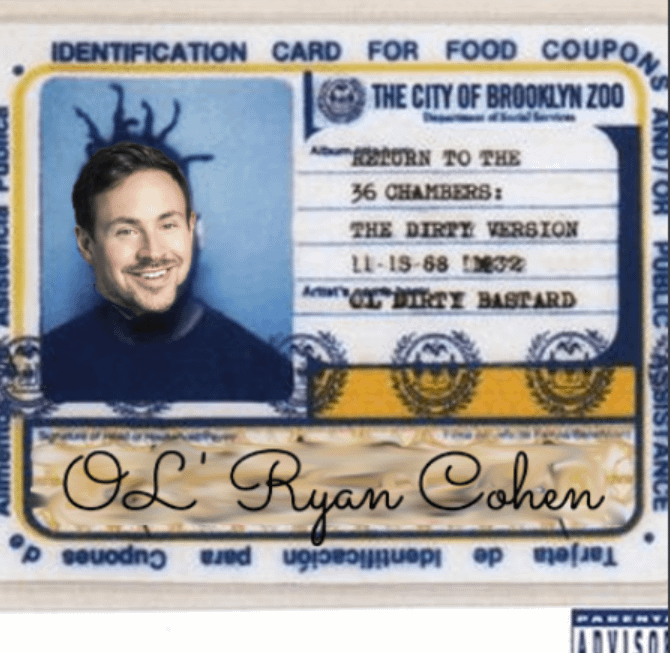 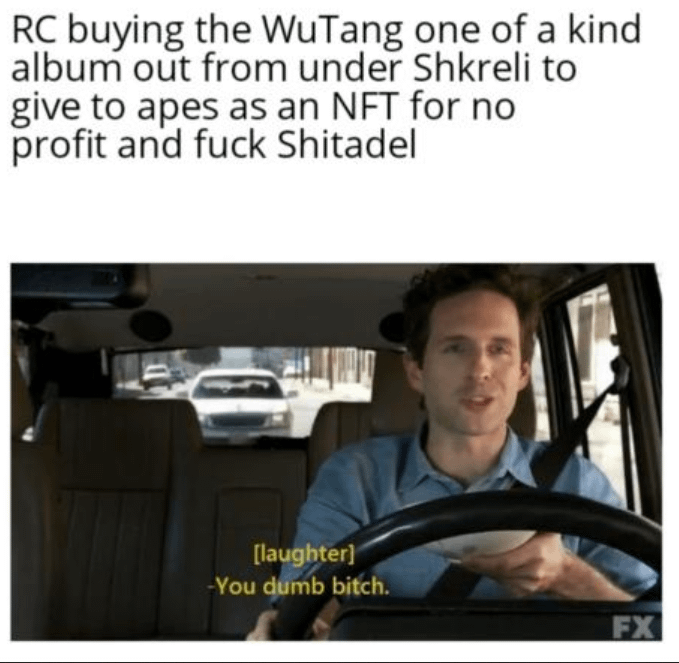 Credit to u/brbbins1 and u/ic__fl21 for the assist with the memes.

Welcome to my psychotic TED talk

EDIT: I wrote this thing in a hurry not expecting much attention. I cleaned it up a bit.

In addition one other addition.

If Ryan Cohen negotiated to buy this album from Shkreli’s seized assets the process could have started in DC right? 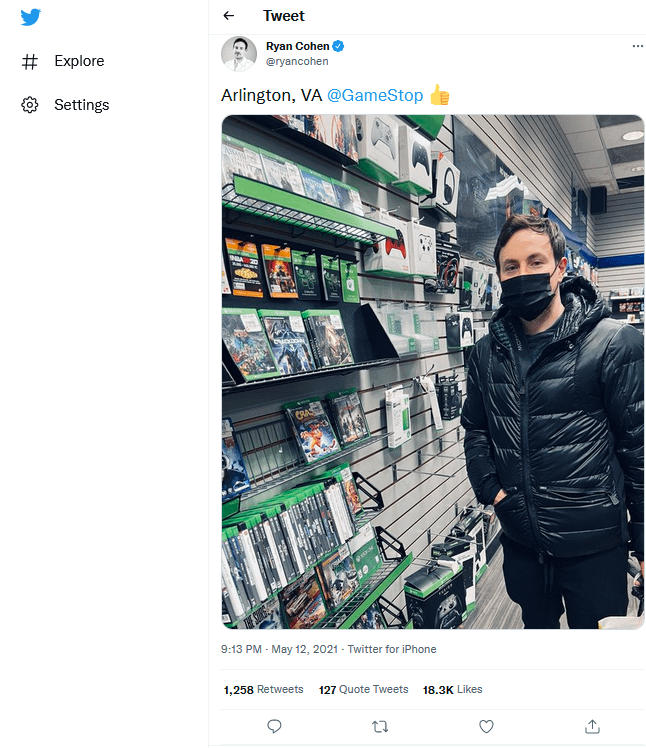 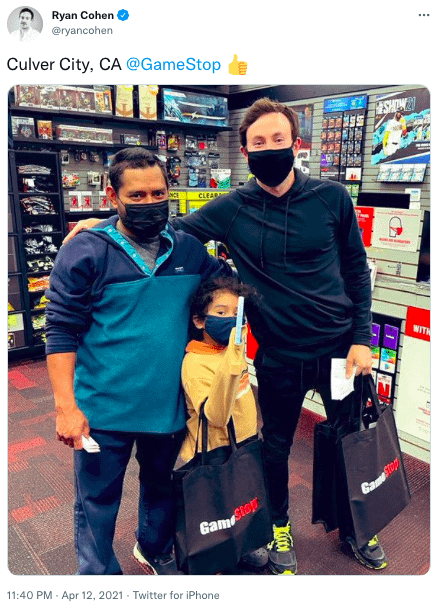 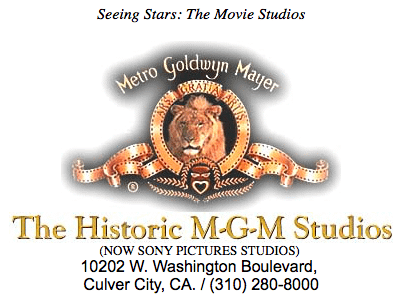 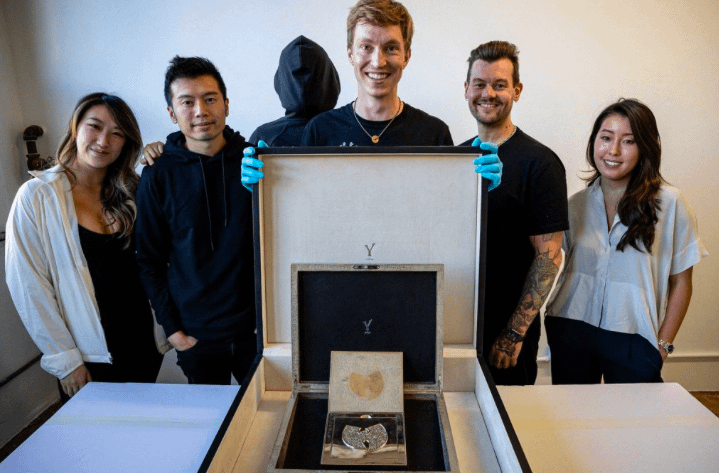 PleasrDAO and unnamed sponsor showing off the goods 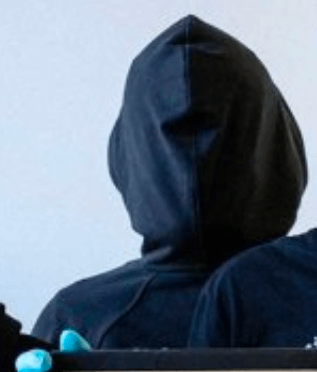 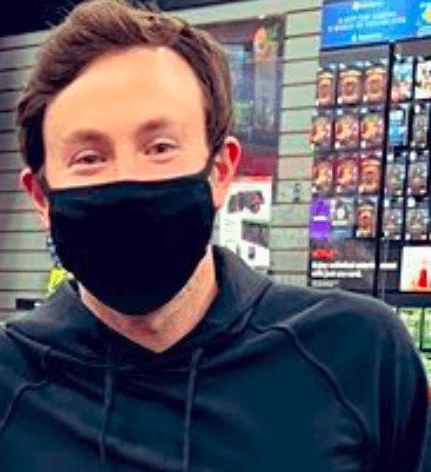 This isn’t the first time he used a location and “thumbs up emoji” to tag an important location to the GameStop location he was at: 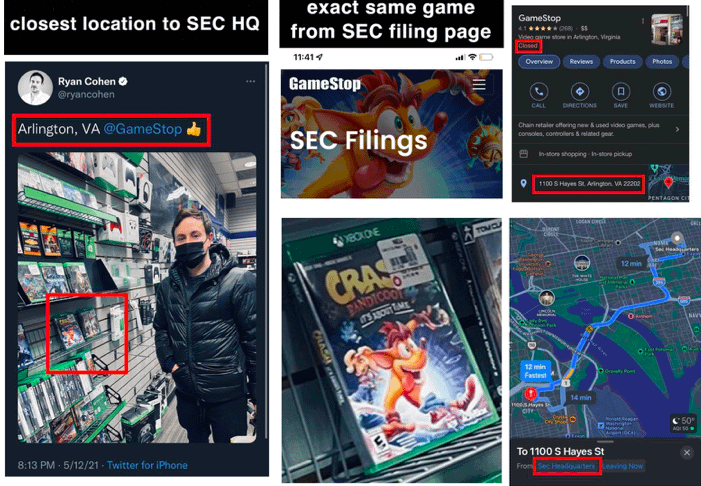 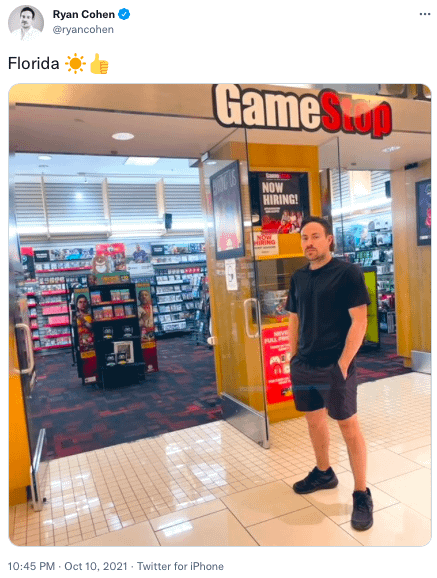 Cohen quite literally taking a step outside of brick and mortar

On that same date GameStop’s lead NFT engineer tweeted this, during this time is when NFT staff was being moved to Miami to ramp up product development.. of probably something big. 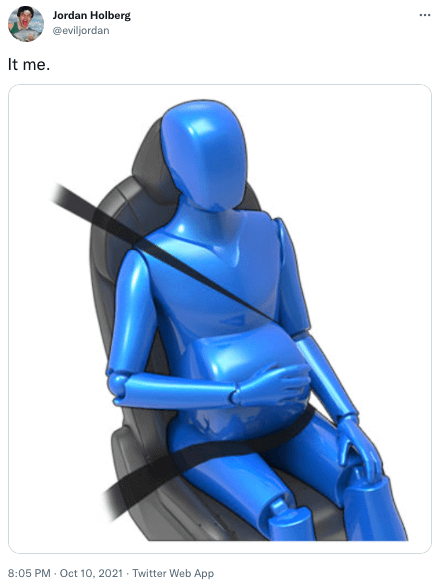 MF is ready to deliver

Structure of how PleasrDAO acquired the Wu Tang Album: 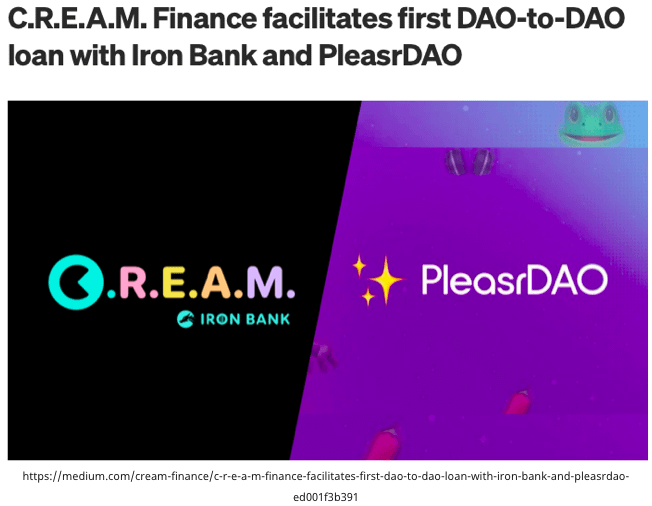 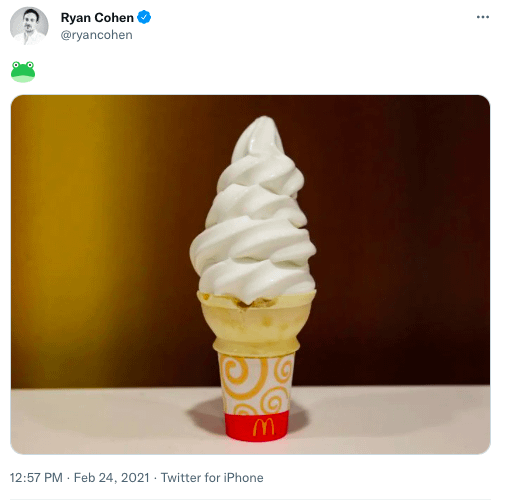 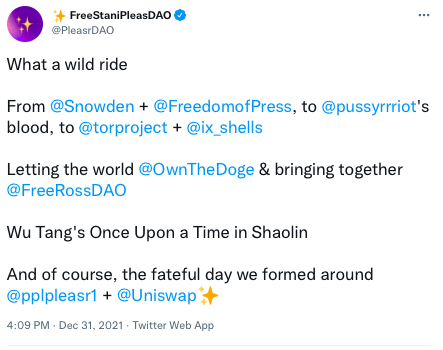 Snowden NFT was used in the swap/loan…interesting..

You mean the Snowden that tweeted about GameStop EXACTLY 365 days after Cohen’s letter to the board? 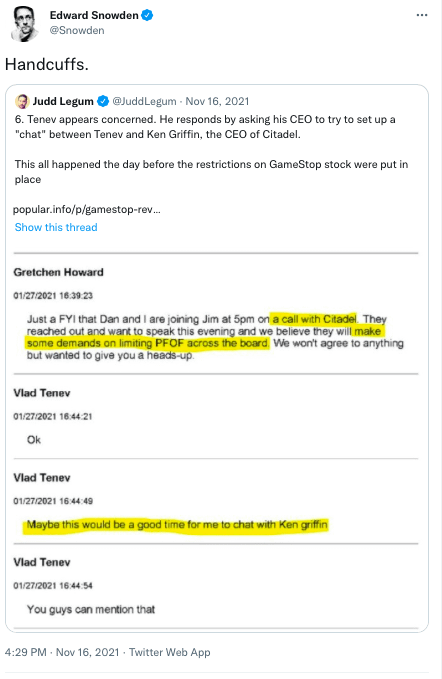 “But but but cream was hacked”

maybe, maybe not, maybe something else entirely..

Same hack date (article is a day late on reporting), Cohen tweets this: 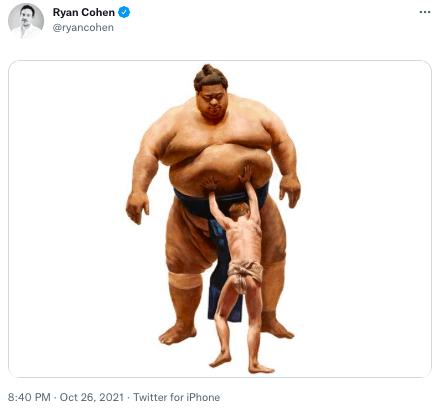 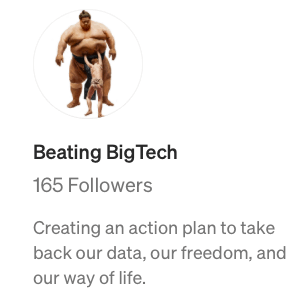 Later that week Kagy tweets this: 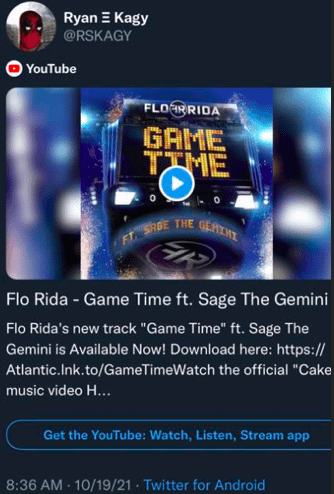 PleasrDAO stated they want it to accessible to the world, pending RZA approval.

I’d assume they show the world reluctant to the tech of NFTs the power of them.

Exclusive access to it, verified by immutable NFTs..while never even monetizing it!!

Issuing it as an NFT dividend would be a cherry on top.