Before you criticize the subject and say “WRONG TOPIC”, SuperStonk is about mainly $GME and exposing market corruption. RC was invested in Bobby and directly ties in to $GME. This isn’t about Bobby. THIS IS ABOUT CRIME.

The Freeman Capital Management (FCM) BBBY story needs further review. MSM put out a story about a 20 year old wiz kid who made over $100million in profit trading BBBY. The whole thing screams “pump and dump” and insider trading. 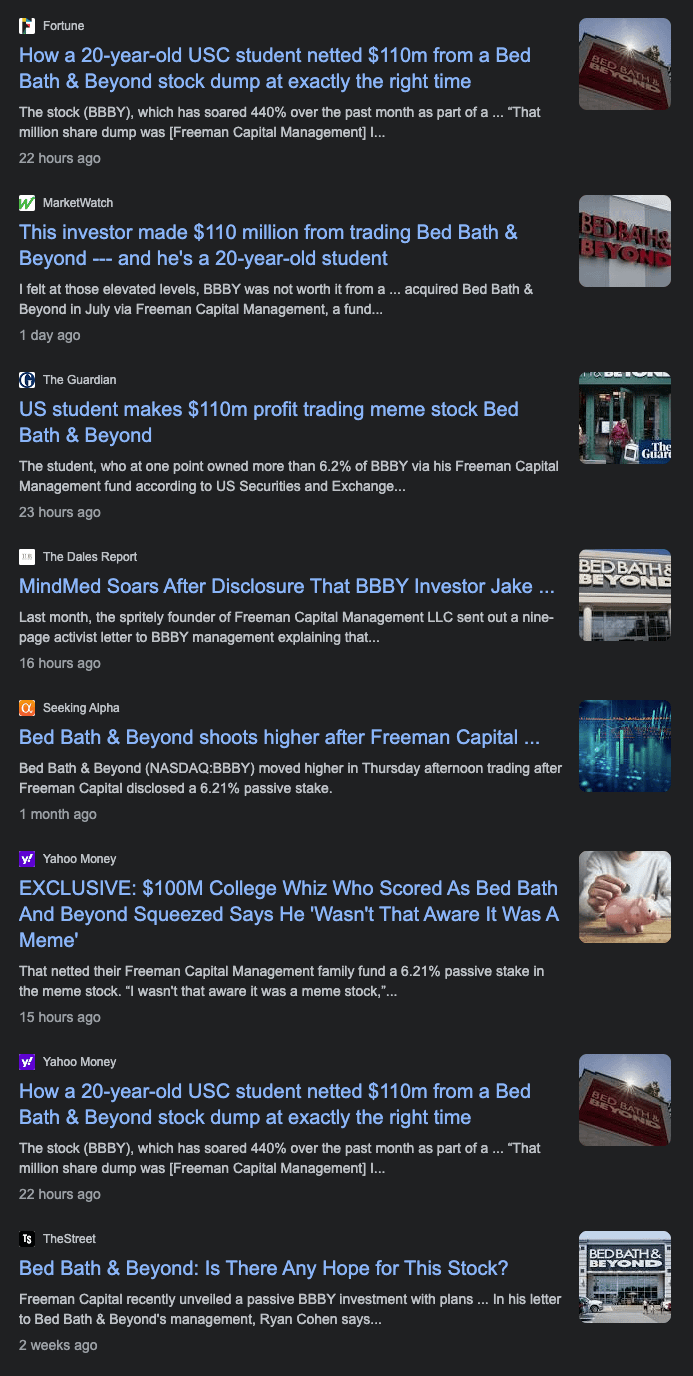 According to Mainstream Media, a 20 year old college student named “Jake Spencer Freeman” invested $25 million into BBBY around $5 and made 4X.

The SEC filing is found here… This link was provided by marketwatch.com

The form that Jake Freeman filed with the SEC was a “13G”.

Schedule 13G is an alternative SEC filing for the Schedule 13D which can be filed in lieu of Schedule 13D by anyone who acquires more than 5% ownership of a Section 13 security and qualifies for one of the exemptions available to the Schedule 13D filing requirement. Wikipedia

According to the SEC website, Jake did fill a 13G to sell FCM’s BBBY stock. 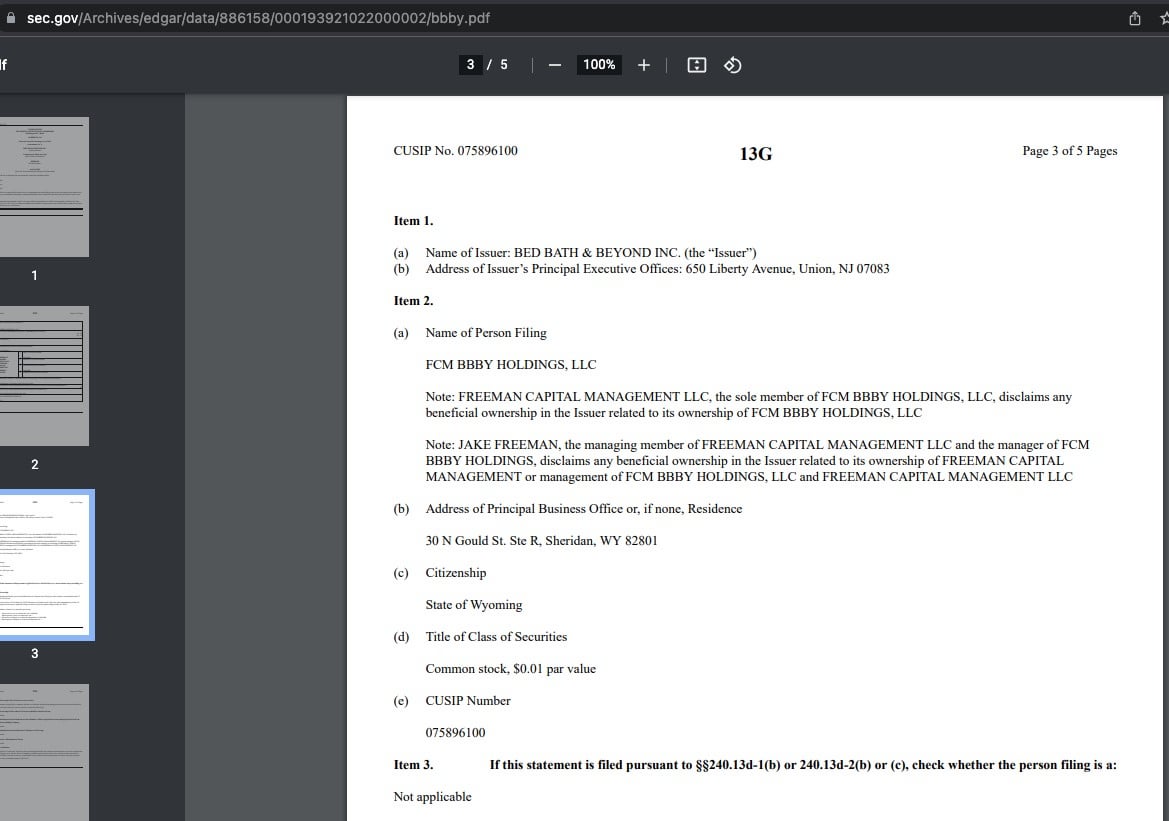 A closer look at FCM BBBY holdings llc confirms that the company is not actually a registered fund. 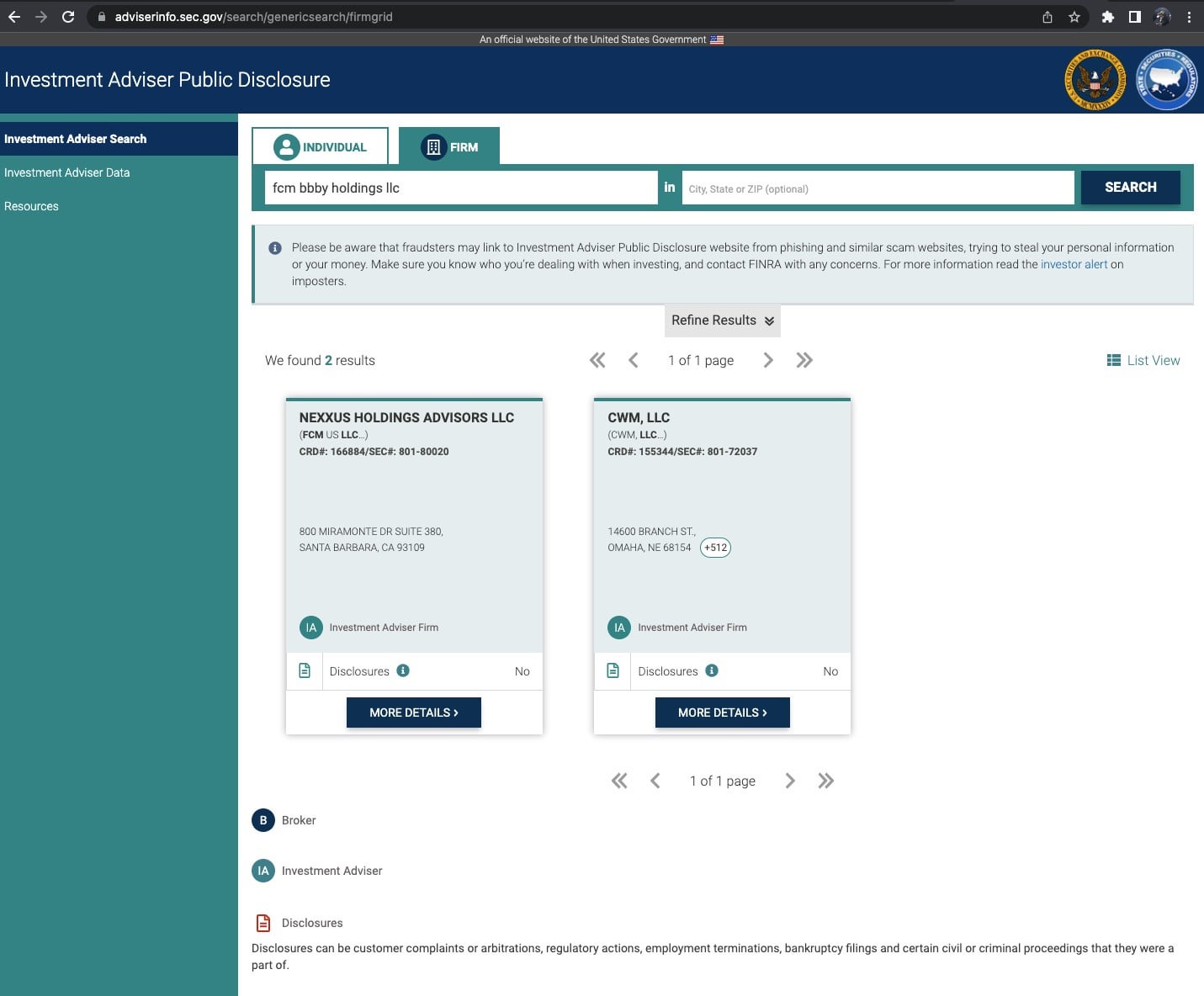 A search on the SEC advisor search shows no records of “FCM BBBY Holdings llc”.

Below we search for “FCM” and it’s grayed out or “not registered”. 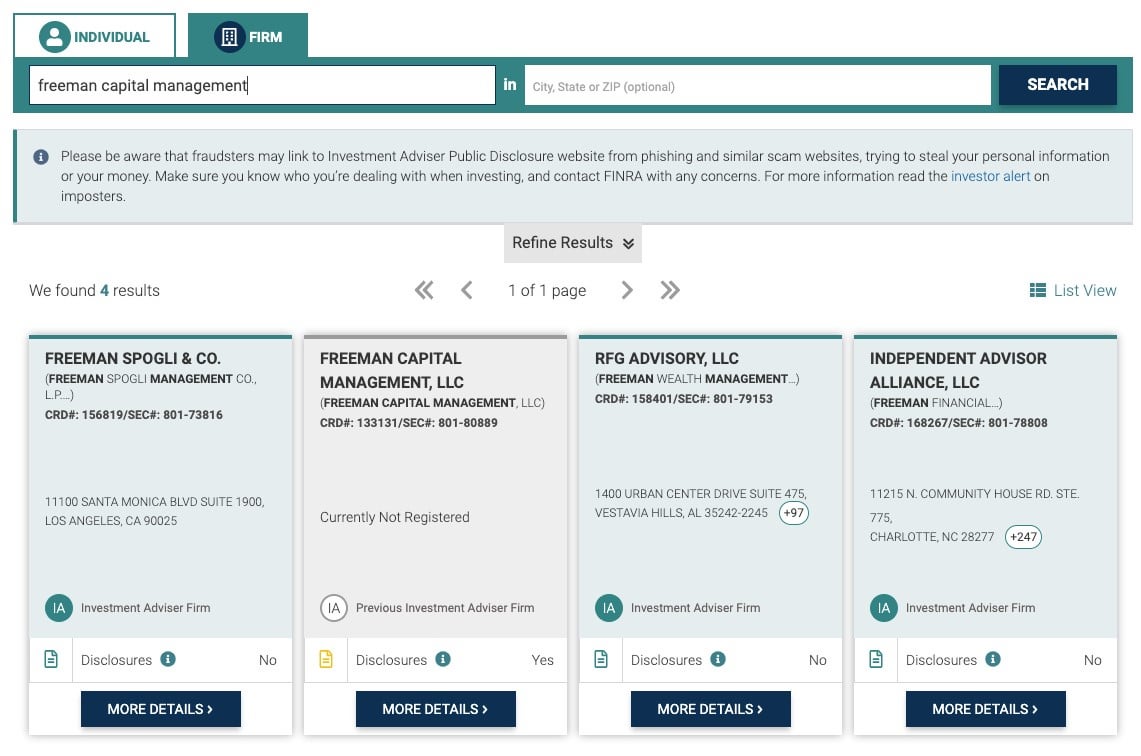 And since Freeman is investing such a large sum for family and friends… he needs to be registered or he is more than likely commingling his funds with investors.

Is Freeman even registered? 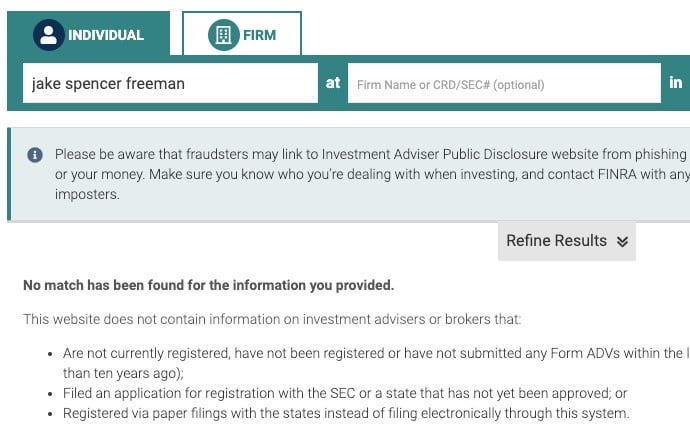 He is not registered as an investment advisor… 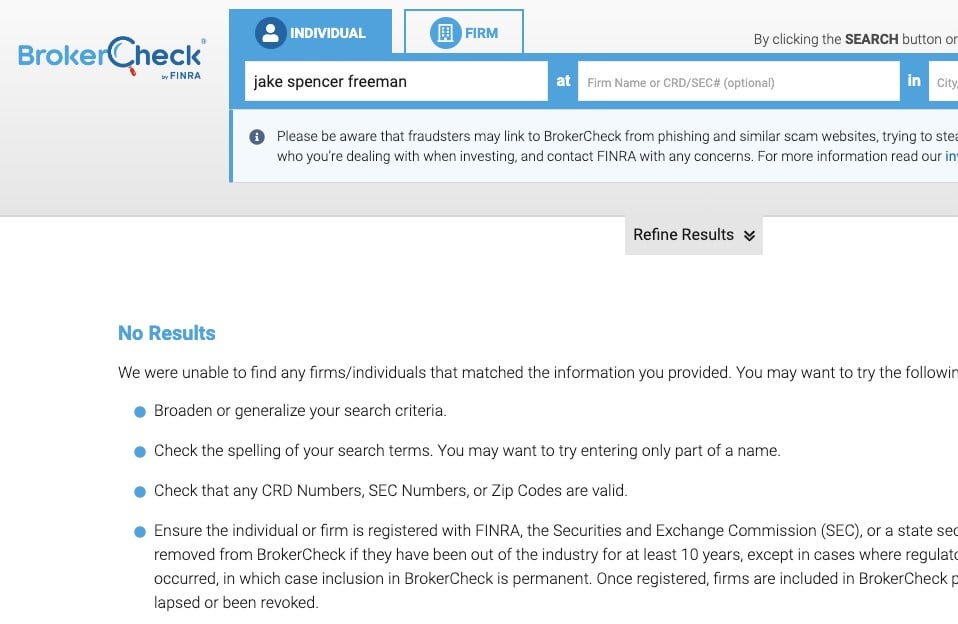 Jake is also not registered as a series 7 broker and has no professional affiliation with FINRA.

Let’s RECAP here… MSM put out a story that a 20 year old fund manager made over $100m on BBBY stock. The supposed fund has been closed since 4-20-2021 and Jake has no professional affiliation with FINRA or the SEC.

The SEC has filed 13G from Jake under the firm “FCM BBBY HOLDINGS LLC”. FCM BBBY Holdings is not actually a registered fund. This FUND has never existed and FCM was closed last year.

The story goes like this, after Freeman bought the shares he wrote a letter to the Board of Directors of BBBY. The letter is below. 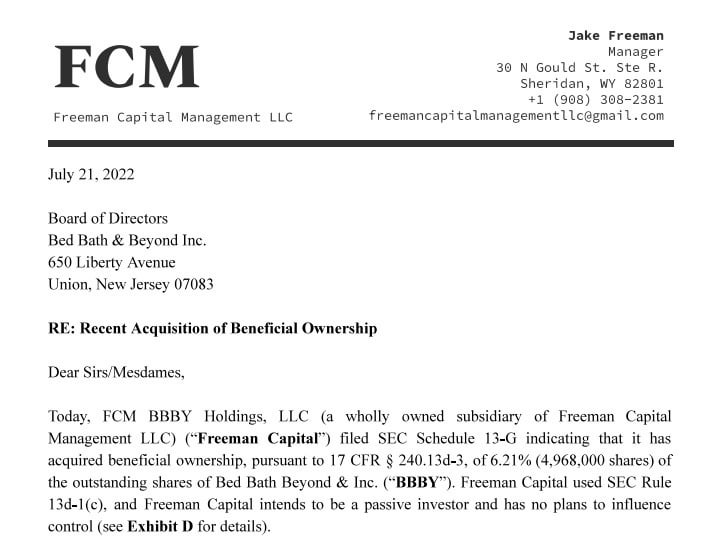 Freeman writes a letter from “FCM” which has not been registered since 2021. And the SEC has this letter on their site.

So the SEC knows about this… It’s on their site. The letter above uses the “Sheridan, WY” address and a gmail email address.

Some key details to review…

Freeman raised the money from friends and family. He is writing to the BBBY from a fund that does not exist and he is more than likely commingling his funds with his clients. The entire thing reeks of FRAUD and the SEC seems fine with it.

Every story about Freeman ends with the Mind Medicine pump… and what happened to that stock? They pumped it… 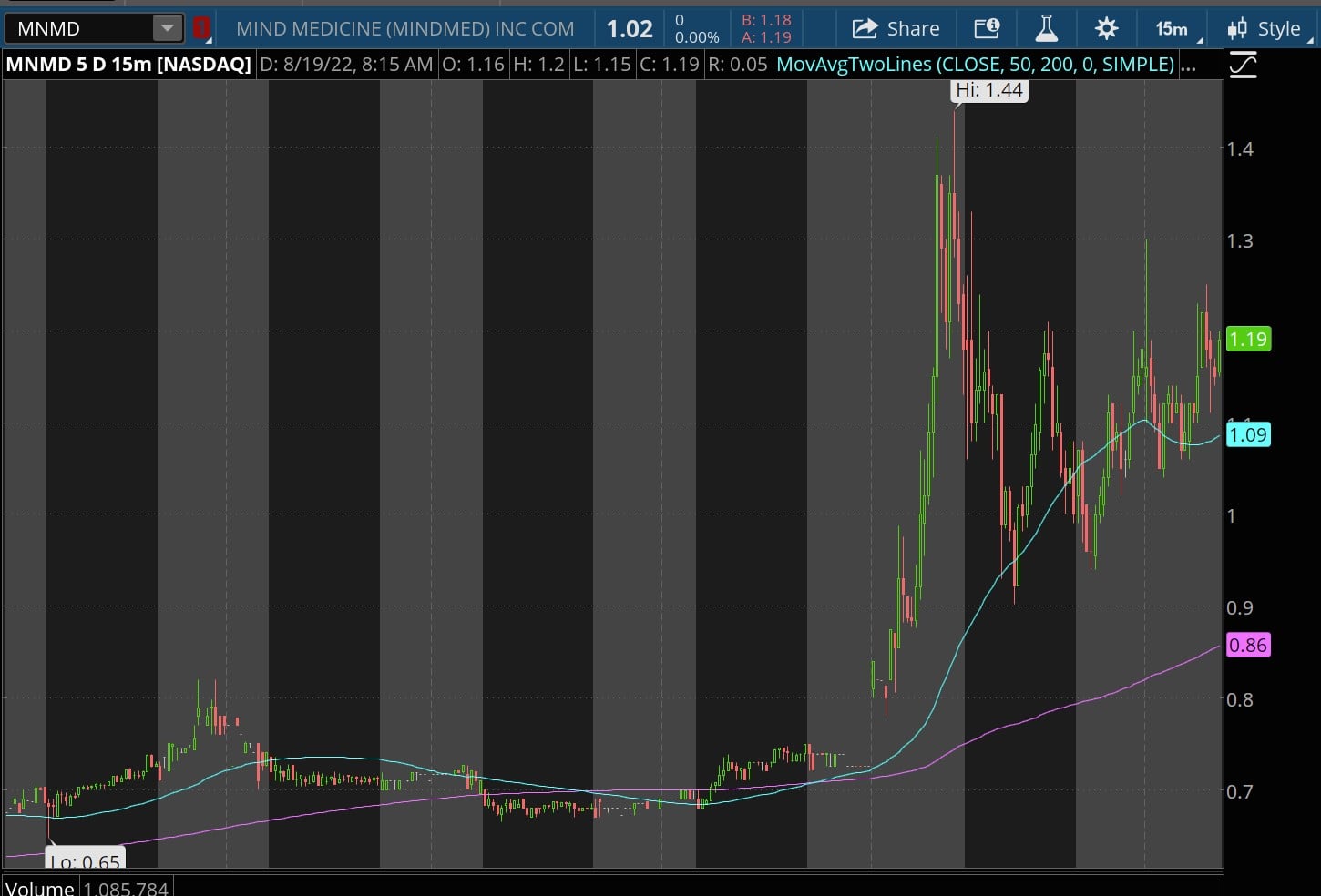 And there you have it… Someone made a boatload pumping this stock from less than 70 cents to $1.40.

It gets better… MSM reports that the trades were done at TDA and IKBR.

What does this all mean?

The FCM BBBY pump and dump, followed by the MNMD pump and dump, was possibly a group effort by the MSM, the Brokers and the SEC to pump up this stock and make a boatload of money.

This is market manipulation and my guess is… Jake Freeman was used as a mule to cover the truth. This is most likely insider trading. The institutions know that the new cycles start(ed) and did this to profit off BBBY. They invested $25m and made over $100m front running their own algo.

They then painted a story that he dumped it to cause price anchoring and deter new investors from buying BBBY.

The whole thing reeks of fraud and crime, insider trading and market manipulation with influence from the MSM, Brokers and the SEC. 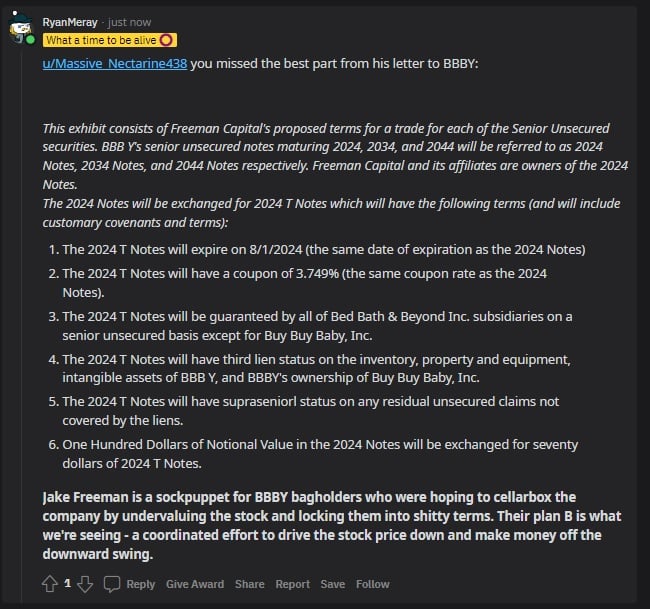