TL;DR: There’s reason to believe that not only were media outlets and journalists paid to bash GME and publish anti-GME articles, but (at least some) YouTubers were also part of the web of corruption, taking in undisclosed sponsorships/jobs in return for helping SHFs targeting a takedown of GameStop as part of a short and distort scheme.

I want to discuss something that’s been on my mind for a while: YouTubers bashing GameStop.

If you search up “GameStop” on YouTube and scroll down, you might find some YouTubers consistently bashing GameStop to the point of suspicion.

Here’s some examples of what I’m talking about: 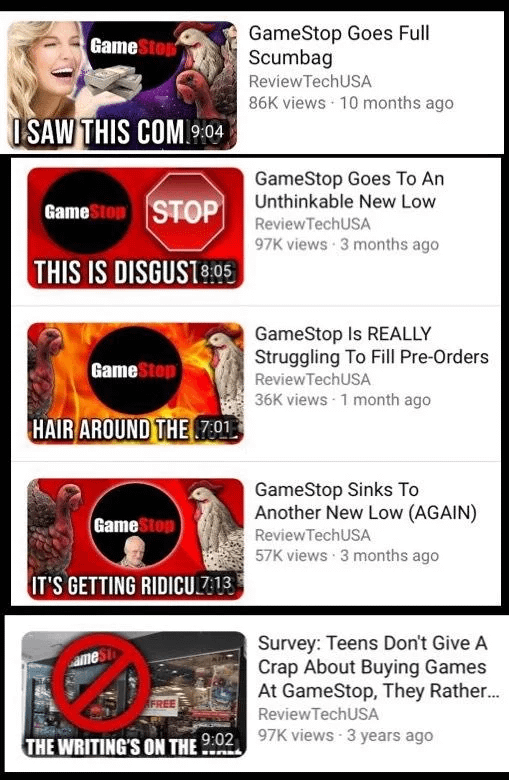 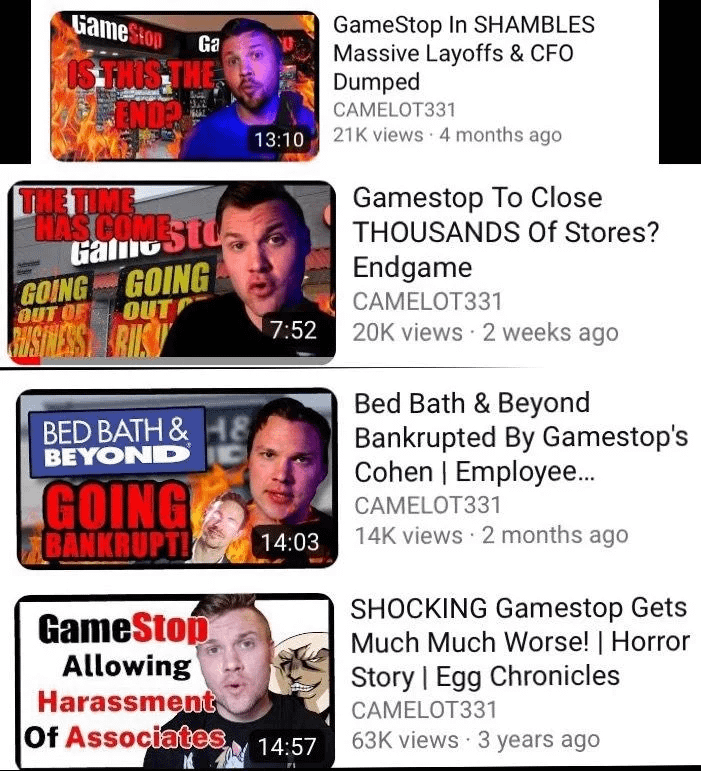 When I see dedicated attacks like these on GME by the same YouTubers, I have to wonder if there are financial incentives behind making these specific types of videos that we don’t know about.

For instance, Cheryl Wischover from Vox reported that there’s brands out there that do pay influences to bash competitors (same method could be applied by a hedge fund to a company they’re shorting): 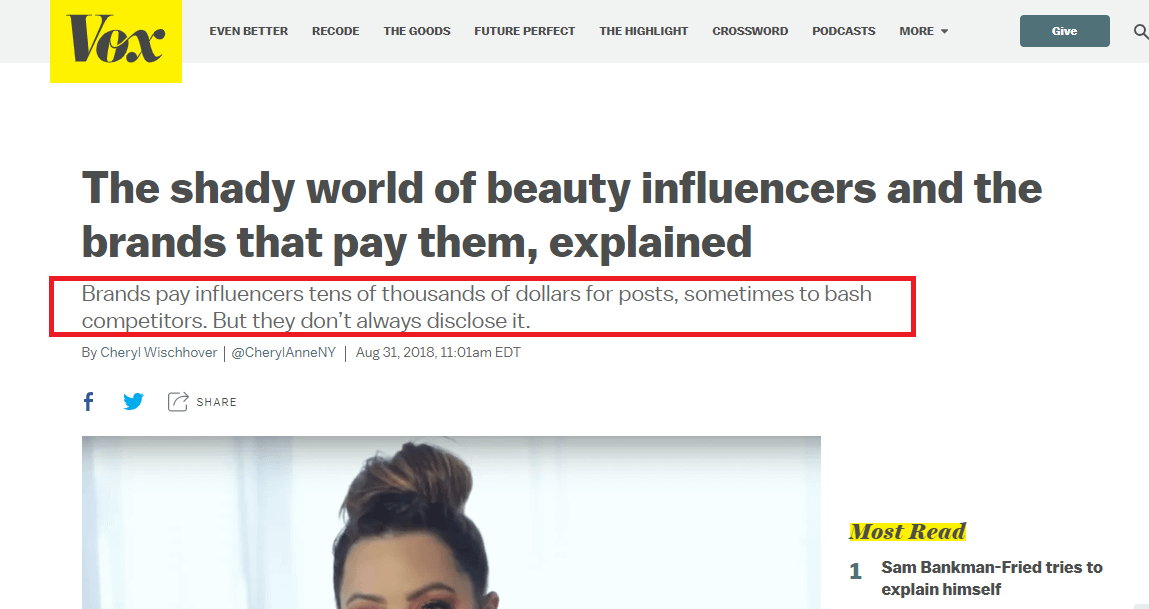 So, we do know that this stuff actually happens irl.

Upon further research, I also found a confession from a paid shill as far back as 2007, who was paid to artificially create negative sentiment towards other companies, so this has been happening as early as the 2000’s. 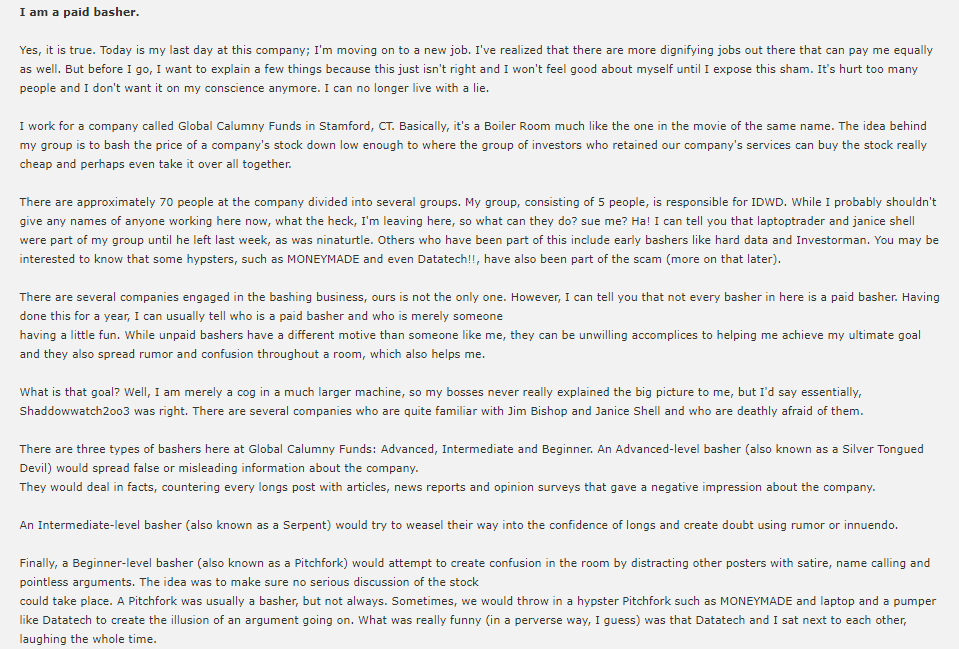 I can’t confirm if that post is true, but it’s definitely believable, because still to this day it happens. Why? Because these would be very effective methods in facilitating pump and dump schemes, as well as short and distort schemes.

Just a few years ago, a YouTuber exposed a company trying to recruit him as a shill to facilitate pump and dumps, which also exposed a long line of many other YouTubers that actually took the money and kept quiet.

So, it seems that only a tiny fraction of people that encounter these recruiters will come out, be honest, and help expose them.

If it’s happening to help long investors pump stocks, then the converse is likely to be true; it could be used as a means to help short investors tank a stock, and profit greatly as a result.

For those of you that don’t know, Ape “pinkcatsonacid” recorded a phone call with a shill recruiter last year that tried to get her to make artificial DD posts on SuperStonk (distraction DD posts, in particular).

A media company actually did reach out to me in June last year. They were talking about how they were going to give me assigned DD posts that I could slightly alter to make it fit more with the community, but the DD was going to look bullish and promote a “date”. I deduced that, on that date, or as we got closer to that date, the price of the stock would tank, and whoever was paying these 3rd party companies to recruit shills was making money off options traders being influenced by the DD posts thinking something was gonna happen on that particular date, going heavy in calls, only to get swept under the rug when nothing happened.

They wanted me to post on a few subs, including this one. I asked the recruiter for an example of what he wanted me to post, and the example he gave me was about promoting July 14, 2021 as “the MOASS date”. I kept that information to myself for a long time, even when I exposed them, because I thought if I brought it up, it’d be FUDdy. When I exposed them last year, I received DMs threatening me to delete the post or I’d get sued or some shit. Some meltdowners told me it was a prank and to delete the post, and I was honestly getting 2nd thoughts, because I wasn’t sure if it was 100% legit anymore. But, sure enough the stock tanked hard as it approached July 14. Nothing happened on that very anticipated date. Everyone that bought call options expecting MOASS got rekt. Ever since then, I became very skeptical about date hype posts, especially from YouTubers like the pickleboy that consistently spit them out.

But, I digress. It is very much possible that they have both shills outright bashing GME as well as plants inside the community causing harm from the inside by promoting misleading DD posts that just hype dates.

For those of you that don’t know when Citadel started shorting GME, Ape “Freadom6” makes a very convincing argument for why Citadel began shorting GameStop around the end of 2008, in his DD “Citadel Used 2008 Bailout Money to Begin the GME Shorting Saga“.

Basically, Citadel got bailed out in 2008, started significantly engaging with GME calls/puts (which we know can be combined to create synthetic short positions), all while the short interest concurrently increased, which leads me to believe that around that time is when Citadel began shorting GME. 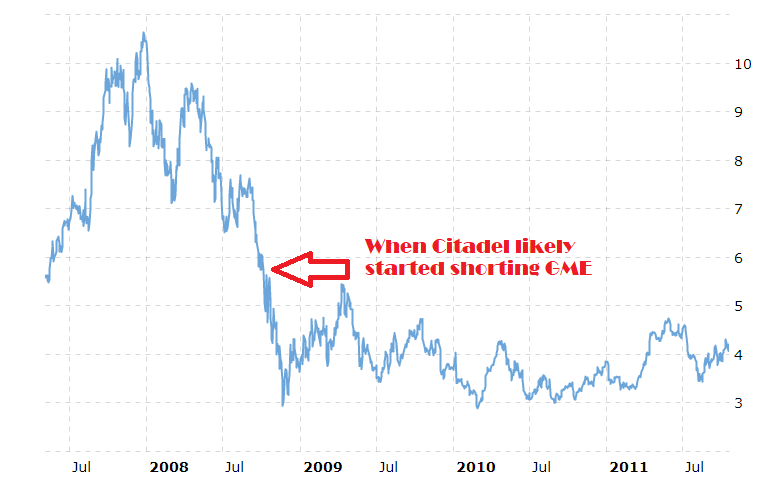 However, Citadel didn’t do as good of a job shorting GME in the beginning. It wasn’t until 2016 when they became GME’s designated market maker, when they actually were able to consistently tank GME hard. So, now you know the magic trick. 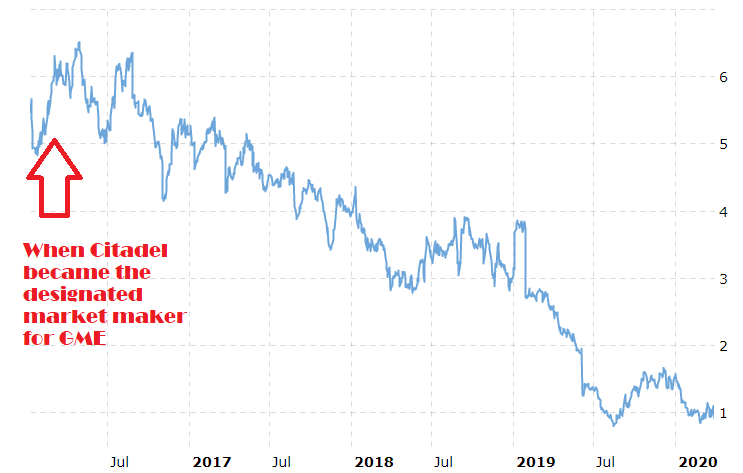 That being said, I’m sure from 2009 and on, they were looking for a variety of ways to short GME. And if shills were active as early as the 2000’s, then it’s entirely possible that Citadel has had 3rd party companies pay YouTubers to bash GameStop since the early 2010’s.

I can’t prove it, as these types of back-end deals rarely go undisclosed, but I am fairly confident it has been and is still happening. This shit isn’t limited to Jim Cramer and MarketWatch. The web runs much deeper than that.

So, what can we do with this information? Well, we can stay vigilant, percolate the genuine DD from the misleading DD that has no substance except date hyping/options promoting. Furthermore, take this as a sign you’re in the right stock. Countless articles, media outlets, and paid professional shills attacking GME over the course of years doesn’t tell me that GME is a bad stock—it tells me that GME is a legitimate threat to SHFs, and they’ve been desperately trying to shut the lid on it to no avail.

Not many Apes know this, but GME was trading above $10 in 2007 (over $40 pre-split), which, if adjusted for inflation, would equate to over $14 (nearly $60 pre-split). That was all the way back in 2007. There was no Ryan Cohen, no DFV, no 58% of the free float DRS’ed. Right now, GME is not even twice the amount it was in 2007. There was no short squeeze in 2021; that was just a run up. We never had a legitimate short squeeze. The fact that we had TONS of documentaries and bullshit movies trying to act like the short squeeze happened is further sign that SHFs really want Apes to believe that shorts closed, and to forget about GME. Are Apes going to forget about GME? Hell no. We all know SHFs are trapped, and DRS will finish what they started. Time is on our side, not on theirs. 🦍🟣🦍